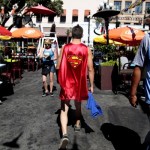 Batman is watching you from Petco Park. Spider-Man is hanging out at the Hard Rock Hotel. There is a huge inflatable Smurf at the foot of Park Boulevard.

Less than a year after Comic-Con International announced that the 41-year-old entertainment convention would be staying here through at least 2015, the Con has taken over San Diego once again, and all is right in our pop-culture universe.

“Having Comic-Con in San Diego is a tradition,” 20-year-old Con volunteer Jazzeel Millena said Wednesday as he waited in a registration line. “And moving it would mess with tradition.”

While Anaheim and Los Angeles put up a fierce fight to take over the Comic-Con contract when it expired in 2012, the Con opted to stay here. And as the five-day fan confab kicked off at the San Diego Convention Center on Wednesday, superhero posters appeared on the walls of downtown’s most high-profile buildings, cartoon characters popped up in the weirdest places, and the people who make their spiritual home at Comic-Con expressed great relief that Comic-Con is still making its home in San Diego.

“There are a bunch of us here who are always at the front of the line for preview night. It’s like family,” said 61-year-old Con veteran Leannah Shank of Carlsbad, who snagged a spot near the front of the entrance line by arriving at the Convention Center just before 3 a.m. Wednesday morning. “There is a sense of community here that is so profound. It would hurt if it were to go somewhere else.”

There are millions of reasons why San Diego wanted to keep Comic-Con to itself. There is the estimated $163 million the convention delivers to the local coffers. There are the many big stars — Justin Timberlake! The “Glee” kids! That Spielberg guy! — who make appearances here, not to mention the many more journalists who come to write about them.

Then there is the estimated impact of the 130,000-plus attendees tweeting all their friends about the hot celebrities, the cool breezes and overall awesomeness of spending the weekend at the center of the entertainment universe.

Inside the convention center, the line of attendees waiting to pick up their badges stretched down the long hall of the Sails Pavilion. It would be the first of many lines in their near future, which could be why some people brought lawn chairs and others curled up on the carpet for a quick nap.

But whether they were hipster girls in furry hats pecking at their iPads or antsy kids in Crocs sipping at their juice boxes, the fans had turned the Convention Center into the best little clubhouse ever.

“There is an intimacy to San Diego, and it’s such a great place where it’s hosted,” said Lisa Gregorian, the chief marketing officer for the Warner Bros. television group, and the woman behind the giant freebie bags that have become the must-have Comic-Con accessory.

“There is something special about that place. It feels intimate, even though there are thousands of people there.”

And in the middle of that first-day crowd, Andy Martinez of Las Vegas was contemplating the idea of Comic-Con without San Diego, and he didn’t like it.

“I have been coming here since 1993, and that would be very disappointing,” said Martinez, who was attending with his wife and three sons. “We would probably still make it, but we wouldn’t be happy about it.”