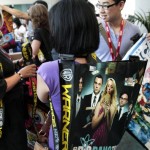 By Karla Peterson, Union Tribune reporter Batman is watching you from Petco Park. Spider-Man is hanging out at the Hard Rock Hotel. There is a huge inflatable Smurf at the foot of Park Boulevard. Less than a year after Comic-Con International announced that the 41-year-old entertainment convention would be staying here through at least 2015, the Con has taken over San … END_OF_DOCUMENT_TOKEN_TO_BE_REPLACED