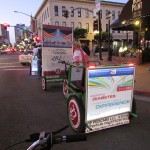 Giant tricycles might not seem formidable to some, but for 15 pedicab companies operating in San Diego, they’re big business.

One such company, VIP PEDICABS, began with a single bike owned by Ali Horuz. Six years later, manager and owner Horuz oversees over 60 drivers during the peak summer season. He describes his fleet of pedicabs as the newest on the road, diligently maintained to eliminate potential mechanical or safety problems. A typical day finds Horuz’s staff transporting groups from hotels to restaurants, and back and forth between event locations, mostly downtown but sometimes as far as Pacific Beach—delivering brides on time to their weddings and recently, as many as 220 people at once to a golf event.

Advertising also proves a popular option. Says Horuz: “We are the only company that has a backlit pedicab advertising panel and can provide large-scale advertising programs to local and visiting convention companies.” That’s high visibility with dozens of pedicabs operating in summer; clients have included Showtime, Focus Features and The CW Television Network.