Below are the August 2019 sales and marketing highlights from various San Diego Tourism Authority departments.

SDTA invested over $744,278 in advertising during the month of August, delivering more than 119.2 million gross impressions. Advertising initiatives for the month included: 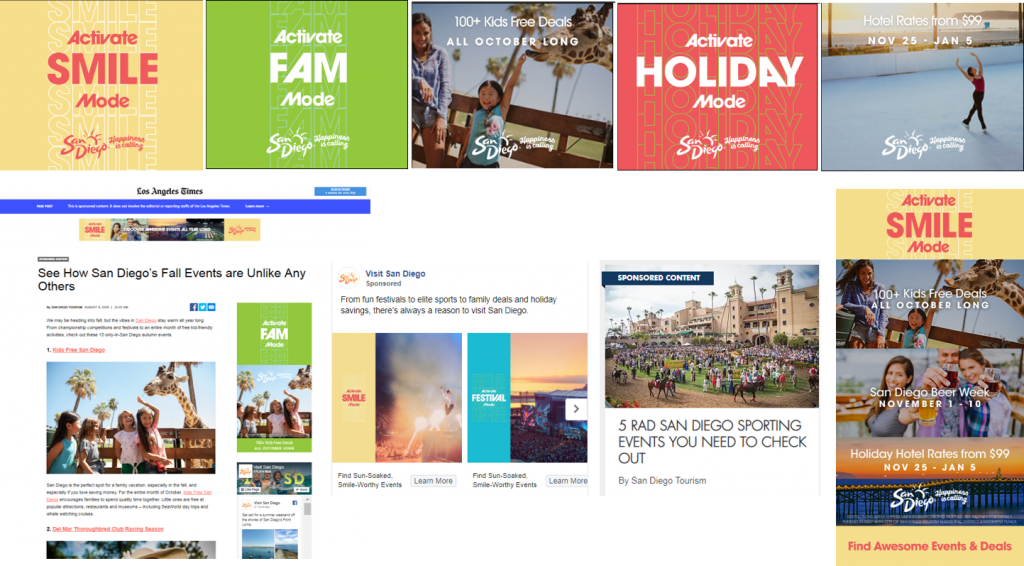 The Cultural Tourism team has been working with MeringCarson to craft the next media partnership to continue elevating Balboa Park’s brand. The next phase of marketing will include driving traffic to the well-performing Balboa Park Experience along with partnering with a high-profile media company on a story-telling initiative. The launch is anticipated to take place in spring 2020, pending alignment with the print/digital media partnership.  MeringCarson will be presenting the plan at the end of September.

The Cultural Tourism team has focused on creating a local marketing plan that better aligns local marketing with the SDTA’s national and international marketing efforts. This program of work will leverage SDTA’s relationships and assets and will support the cultural institutions in Balboa Park as well as the Explorer Pass program. The plan includes multiple media partners to help share Balboa Park’s story across various mediums such as print, digital marketing, podcasts, radio and broadcast media and include San Diego Magazine and KPBS.

The next steps for this effort include securing a broadcast media partner and raising funds to execute the plan. Ms. Davies has secured $75,000 from the Legler Benbough Foundation and is working to match those funds.

As part of expanding the Cultural Tourism team’s role, new cultural district videos are being created—highlighting the various council districts and the various cultural elements in each. Included are the best places to eat, shop as well as authentic cultural experiences. The first four videos are in post-production and cover cultural offerings in council districts 2, 4, 8 and 9. To ensure authentic representation, the Cultural Tourism team met with representatives from the City Councilmember’s staff and selected residents from each of the council districts to serve as hosts. Ms. Davies has met with representatives from City Councilmember’s offices in districts 1,3, 5, 6 and 7 to establish what to highlight and whom to feature as host. District 6 will be filmed in September with districts 5, 3 and 1 scheduled to be filmed in October. The goal is to finish all the cultural district videos by the end of 2019.

Additionally, the Cultural Tourism team has committed to cataloging San Diego’s cultural assets to use in developing content and programming to highlight the City’s unique artistic and cultural offerings. The initial step in the cataloging process is to inventory all of San Diego’s murals. The initial archive is expected to be completed by the end of September.

The team has made a concerted effort to stay engaged with the institutions in the park in various ways. Ms. Davies continues to meet regularly with park stakeholders offering assistance and collaboration. Along with various stakeholders, Ms. Davies and team continue to partner with the Balboa Park Cultural Partnership as well as the Balboa Park Online Collaborative on various projects such as the local marketing plan for Balboa Park, surveying efforts and data collection.

With the support of the SDTA’s Planning and Research team, a social media survey was put together to distribute to the institutions in the park to better understand how the SDTA can provide assistance and resources to the institutions and park as a whole. The results have been evaluated with a majority consensus requesting training, resources and a best-practices workshop.  The Cultural Tourism team is working with the Marketing Team as well as BPCP and BPOC to organize and provide requested resources to the Balboa Park institutions.

Additionally, the Cultural Tourism team continues to manage the event/exhibit collection process with continued growth in institution participation since the program was instituted.

Web traffic for June included 1.9 million user sessions between the desktop and mobile websites (excluding Travel Blog). The team posted a total of 40 Tweets, 20 Facebook posts, and 48 Instagram posts and Stories posts through our social channels. There were 6 blogs and 11 consumer emails published this month.

Overall sessions to the China website (sandiego.com.cn) was 1,253. The social media team, in partnership with Hylink, published a total of 27 Weibo posts and 4 WeChat posts.

Overall traffic to the Mexico page was 1,049 unique users. The social media team, in partnership with PR Central, published a total of 6 Facebook posts and 4 Instagram posts and stories posts.

Overall traffic to the Japan page was 2,581 unique users. The social media team, in partnership with aviaREPs, published a total of 16 Facebook posts. 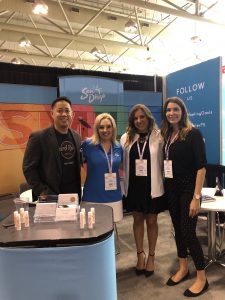 The Hotel Meetings Sales team turned it up in August, with 65 booked groups representing 26,294 new room nights for the destination.  In addition, the team attended 3 tradeshows and conducted 6 client events in key markets around the country.

Connect Marketplace continues to be a key tradeshow for San Diego, being held in Louisville, KY on August 26-28.  Three National Sales Directors attended – Rajeev Brown, Andrea O’Hara and Brianne Mouton, conducting 150 one on one appointments in the Association, Corporate and Specialty market tracks.  These appointments resulted in 35 potential future leads equating to 15,720 total room nights. Connect Marketplace hosted a total of 4,000 attendees and included 30 education sessions in addition to the marketplace appointments.

While on the road, Rajeev and Brianne also conducted a successful client event in Indianapolis, with 15 clients in attendance.  Pictured with Rajeev are the Owner and Founders of Bottom Line Travel Solutions, LLC, Cathy Garver and Anita De Cecco.

In addition to the outbound activity, locally in San Diego, the Site Experience team had a busy August, with 25 client site experiences, creating exposure to 87 hotels and 21 venues.

16 Members attended the Open Office Hours to learn how to best maximize benefits.

The team played an important role in organizing a successful Hospitality Industry Cruise in partnership with other professional associations in San Diego, and Hornblower Cruises and Events. Over 1,200 professionals from every aspect of the tourism industry attended this annual event.

In August the promotional and paid media elements of the Alipay-Brand USA program launched. The $1 million advertising program spans several online platforms and will deliver an estimated 116 million impressions, driving visitors to trip-planning, booking and merchant pages within Alipay and Fliggy through December 31, 2019. 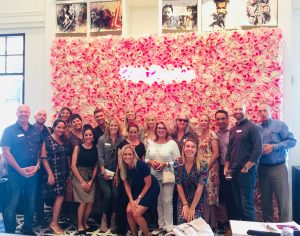 In August, the SDTA Communications team began plans for international 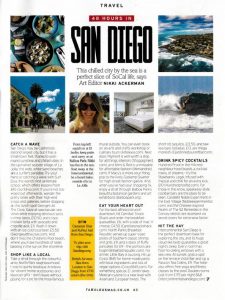 media fam tours, including an Australia fam in September and fams from the UK and Germany in November. Media hosted during August included the UK’s National Geographic Traveller magazine, which is planning an 8-10 page feature on San Diego in spring 2020. 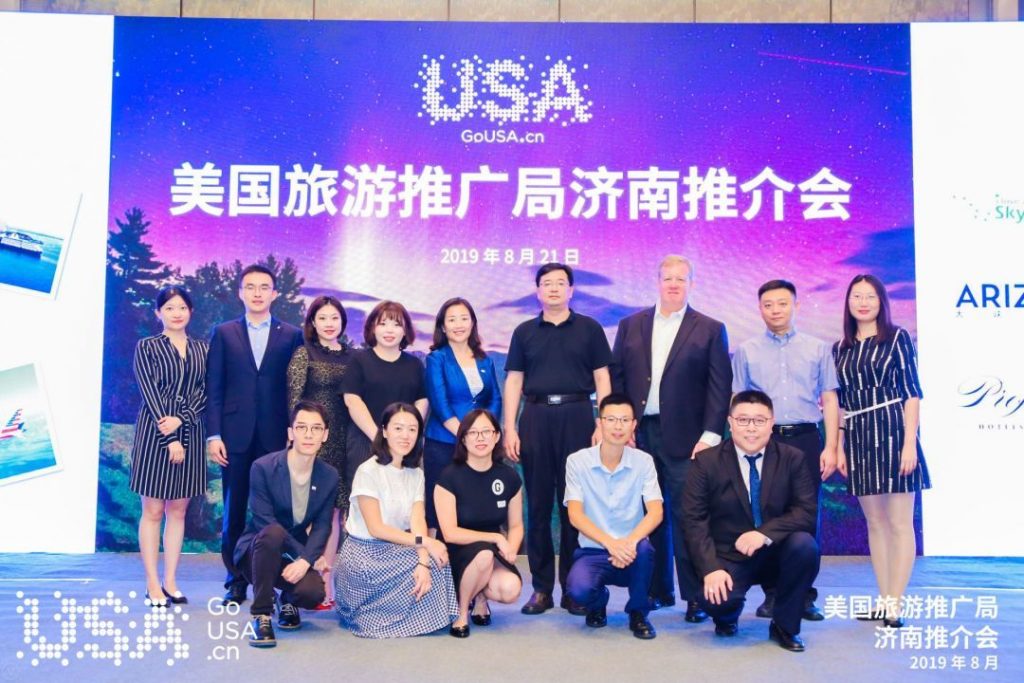 Denise Heredia, Travel Trade Representative in Mexico participated in the Travel Impressions agent training where she presented what’s new in San Diego and instructions on how to access the Specialist Program to over 40 travel agents in Mexico City.

SDTA’s Germany Representation team held a breakfast seminar for client Flamingo Fernreisen where they were able to train 7 sales staff on August 15th.

The UK Representation team trained 64 agents in August during their visits to American Holidays, American Sky and Virgin Holidays. 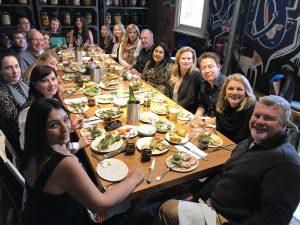 member organizations joined Riki Suzuki, Tourism Development Manager, visiting Sydney, Melbourne and Brisbane for trainings, meetings, client events and media interviews. Throughout the weeklong mission, delegates met and trained about 200 agents. The SDTA also launched an incentive program, sponsored by SDTA Members and Delta Airlines to promote the San Diego Specialist Training Program. Within a week from the launch, completions of the specialist program are up to 90 and expected to grow more as the incentive runs until the end of September.

On August 20th and 21st, Angel Lee, Travel Trade Representative in China participated in Brand USA Roadshow in Jinan. Angel gave a destination presentation to over 60 travel professionals in the region followed by the one-on-one discussions with some of them.