Below are the June 2019 sales and marketing highlights from various San Diego Tourism Authority departments.

SDTA invested over $993,934 in advertising during the month of June, delivering more than 275.2 million gross impressions. Noteworthy advertising initiatives for the month included:

The family content initiative including the co-op partnerships with the San Diego Zoo Safari Park, SeaWorld San Diego and LEGOLAND California also completed in June. SDTA’s “One Bright Idea” and “Stories from the Sock Drawer” video series included family-specific positioning featuring edutainment experiences that are rewarding for the entire family. The family content series were distributed through Facebook, YouTube Trueview and Viant, delivering 28.4 million impressions with $420,078 in media spend. 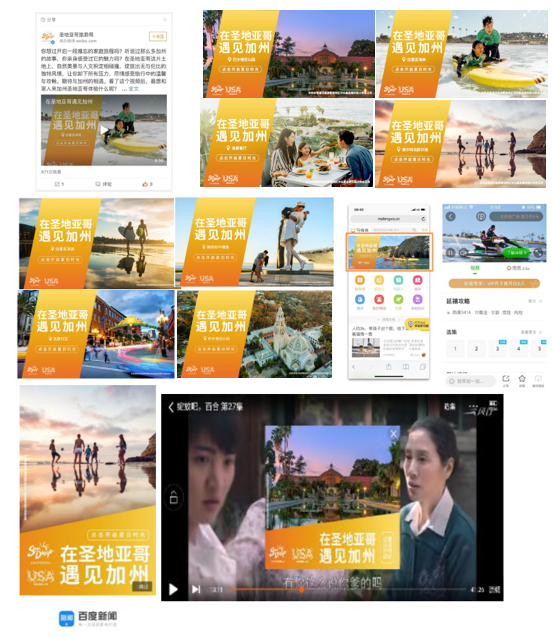 In June, SDTA also wrapped up the final phase of the Ctrip “Best of California” partnership with San Francisco Travel, the Always-On layer of the Baidu search marketing campaign, and the final two live streaming episodes on Weibo through Yizhibo.

Paid media spend for the China market during June totaled $195,154 with 55% contributed by Brand USA and affinity partners, delivering more than 57.3 million impressions.

The second flight of SDTA’s digital advertising program in Canada continued through June and will wrap up in July. Media spend during June totaled $278,901 with 19% contributed by Brand USA and affinity partners, delivering 35.8 million impressions.

To capitalize on the momentum generated from the National Geographic Partnership and maximize its budget, the Cultural Tourism team employed an engaging digital storytelling strategy detailing Balboa Park’s unique attributes while coupling it with a high-profile print component, including a two-page spread in The New York Times Magazine Travel Edition on May 19.

The digital Balboa Park Experience allows users to spin or click through 20 different experiences to highlight the breadth and depth of the park’s offerings. The development of the Experience took place throughout March and April, with the digital campaign— through such partners as Google Display Network, Sharethrough and The New York Times—officially launching on May 16. 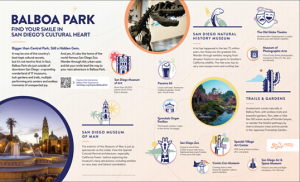 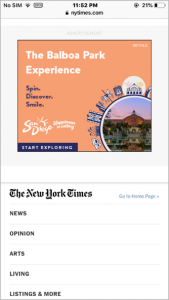 The City of San Diego’s Arts & Culture Commission contracted with the SDTA Cultural Tourism team to provide a digital marketing campaign to highlight San Diego’s three cultural districts; Balboa Park, Oceanside and Barrio Logan. The SDTA created all content in-house and used the full $20,000 to promote the cultural districts through a boosted social media campaign and a native campaign using Google Display Network. The campaign resulted in more than 4.7 million impressions, which was 58 percent higher than goal, as well as 44,000 website visits. 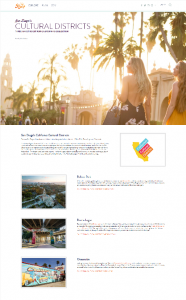 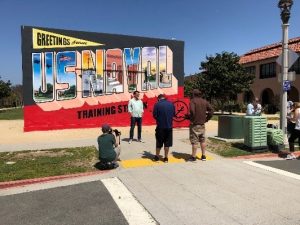 The Cultural Tourism team continues to meet regularly with institution stakeholders in an effort to understand how the SDTA can better serve the intuitions and Balboa Park as a whole. To further the mission of the park and the institutions, the team has also made an effort to meet regularly with city stakeholders with the hope of aligning similar missions with one another. This outreach has led to multiple connections furthering the mission and agenda of these stakeholders that ultimately elevates the visitor’s experience in Balboa Park. In addition, the Cultural Tourism team reached out to each of the institutions to check in on their respective compliance with the Balboa Park Brand Ambassador Guide, which was created in conjunction with the Balboa Park Cultural Partnership, and found that only four institutions have yet to implement at least some of the recommendations. Please see appendix for full report. 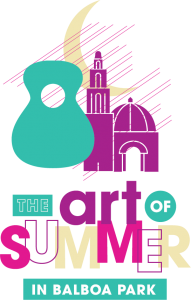 In collaboration with the Balboa Park Cultural Partnership (BPCP) and the Balboa Park Online Collaborative (BPOC), the SDTA’s in-house team developed the theme and imagery for the 2019 Balboa Park Summer Campaign: The Art of Summer.

Launched in June, the BPCP and the BPOC created a dedicated summer page using these graphic assets and are developing a digital campaign to drive people to the information. In addition, the SDTA has updated its summer programming page and will use its website, blog and other owned channels to help drive traffic to the dedicated summer page on balboapark.org.

Web traffic for June included 1.9 million user sessions (excluding Travel Blog). The team posted a total of 57 Tweets, 26 Facebook posts, and 39 Instagram posts and Stories posts through our social channels. There were 13 blogs and 11 consumer emails published this month. 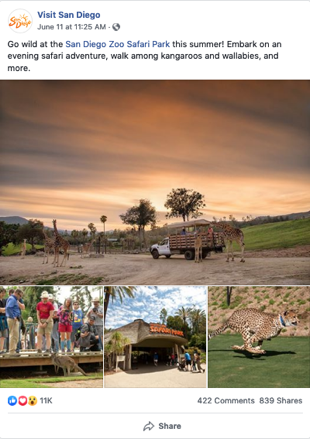 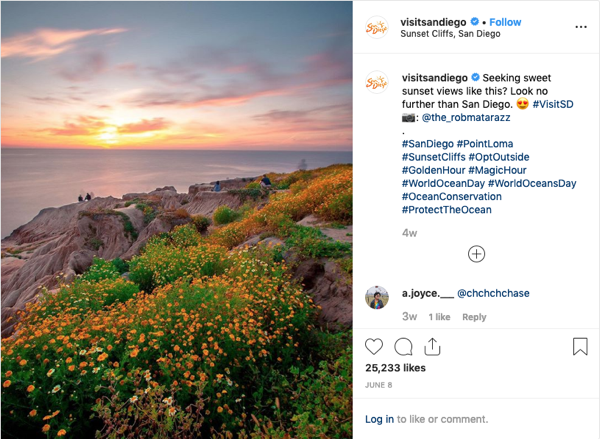 Overall sessions to the China website (sandiego.com.cn) was 193,729. The social media team, in partnership with Hylink, published a total of 28 Weibo posts and 4 WeChat posts.

Overall traffic to the Mexico (sandiego.org/mexico) page was 804 unique users. The social media team, in partnership with PR Central, published a total of 9 Facebook posts and 8 Instagram posts and Stories posts. 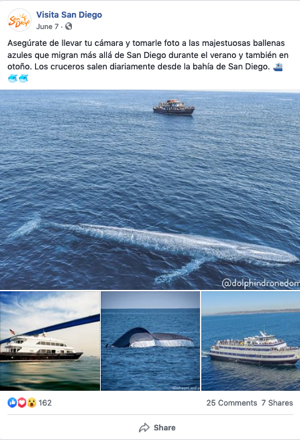 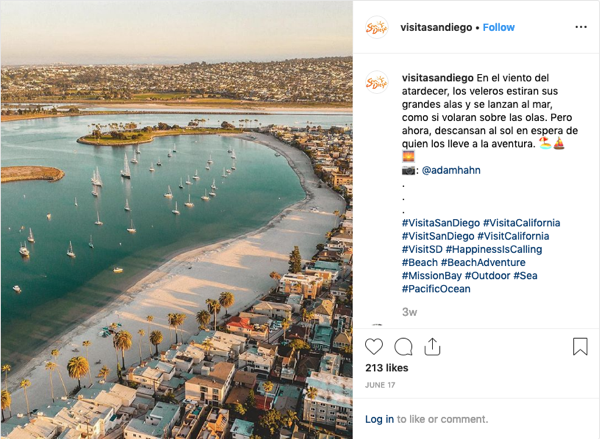 Overall traffic to the Japan page (sandiego.org/Japan) was 2,319 unique users. The social media team, in partnership with aviaREPs, published a total of 15 Facebook posts. 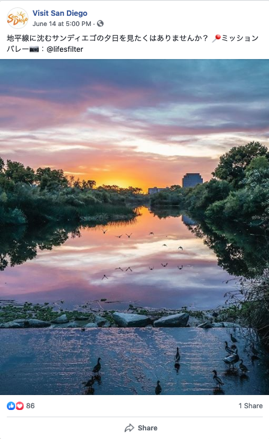 13 Members attended the Open Office Hours to learn how to best maximize benefits.

On June 26 the team in collaboration with Marketing Services held another Social Media Workshop, sponsored by USD Continuing & Professional Education. Over 75 Members attended the session.

Member outreach
In June the team visited, met or attended events with these Members: 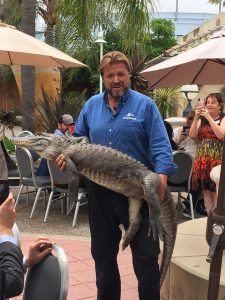 Through our on-going Customer Acquisition program, the hotel sales team had an incredible month, generating 19 group leads in June, representing 14,383 room nights.  These leads were generated from our M & I Worldwide, Connect, NHS Global, and Strategic Site Selection FAM’s this past year.  In total, the team has generated 249 leads, booking 88 programs (55,933 RN’s) within the Customer Acquisition program.  This program is our proactive sales efforts designed to bring clients with targeted group business opportunities to San Diego or conducting in market events in key cities around the country.

Finishing out the year, the sales and events team conducted 3 Arizona client events (52 clients in attendance), while traveling to Toronto for MPI WEC and Detroit for SGMP NEC.  Between the events and tradeshows, 7 group leads have been generated, with more soon on the way. 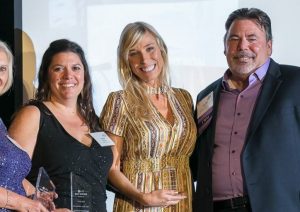 Congratulations to Julie Hauger, Events Manager who was recognized twice at MPI’s 40th annual awards dinner on June 20th.  First, she won the President’s Award for her tremendous contribution to the chapter.  No doubt her positive attitude, execution of great events and dedication are a few of the many reasons why Julie received the top award of the night.  Julie was also a significant contributor to their GMID committee which won for the best performance of the year. 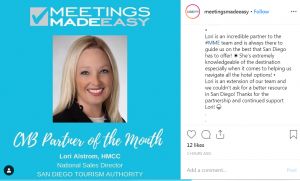 of the Month” from Meetings Made Easy, a prominent hotel site selection company.  Lori’s destination expertise and consultative sales skills helped her earn this great honor.

Congratulations Julie and Lori, on your well-deserved recognition!

Over the next few months, we will have 7 classes for sales associates to choose from, where we expect to have over 200 graduates. As a reminder, this certification program is designed specifically for Hotel Sales Managers, Directors of Sales & Marketing, and General Managers. It provides attendees with actionable strategies for selling their property, neighborhood, and the destination to improve hotel conversion rates.

The Site Experience team had another steady month, with 15 client site experiences, creating exposure to 47 hotels and 5 venues.

In June, the Communications team traveled to Anaheim to participate in IPW 2019.  International PR Manager Joe Timko participated in the Media Marketplace and held deskside meetings with 20 international media representing Germany, Switzerland, Mexico, Canada, the UK, Brazil, and the Netherlands. 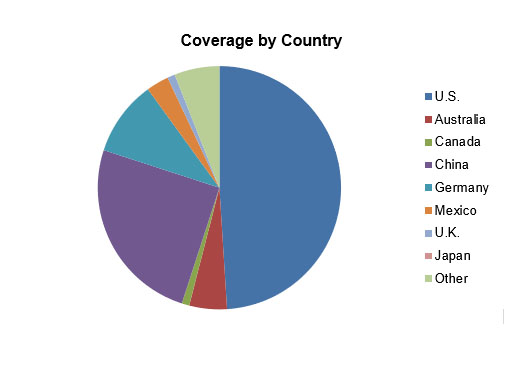 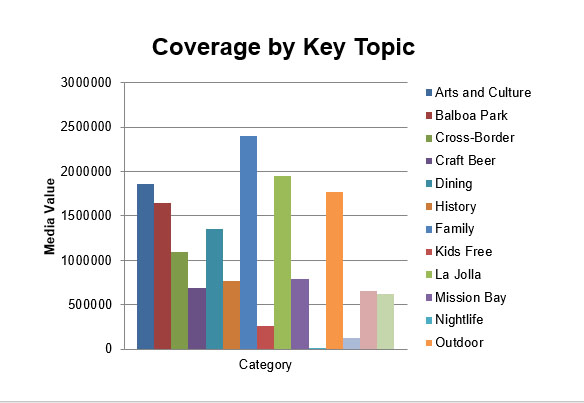 The entire SDTA sales team (including reps from Mexico, China and Japan) attended the IPW tradeshow in Anaheim in early June. Due to the show’s proximity to San Diego, there was a large effort to have our destination stand out at the show.  Beyond the 160 1-on-1 appointments held during the show, our destination also showcased ourselves with a large branded presence on the tradeshow floor, a video advertising wall in the lobby of the convention center, our own dedicated San Diego party with nearly 300 guests and participation in 2 major Visit California initiatives – a beach party plus 5 days of major activations in the plaza outside the convention center doors. Pre & Post IPW FAMs were also held and in total we saw nearly 100 trade clients in-market before or after the show.  All-in-all this year’s IPW was certainly the most exposure San Diego has seen since we began participating in IPW over 35 years ago. 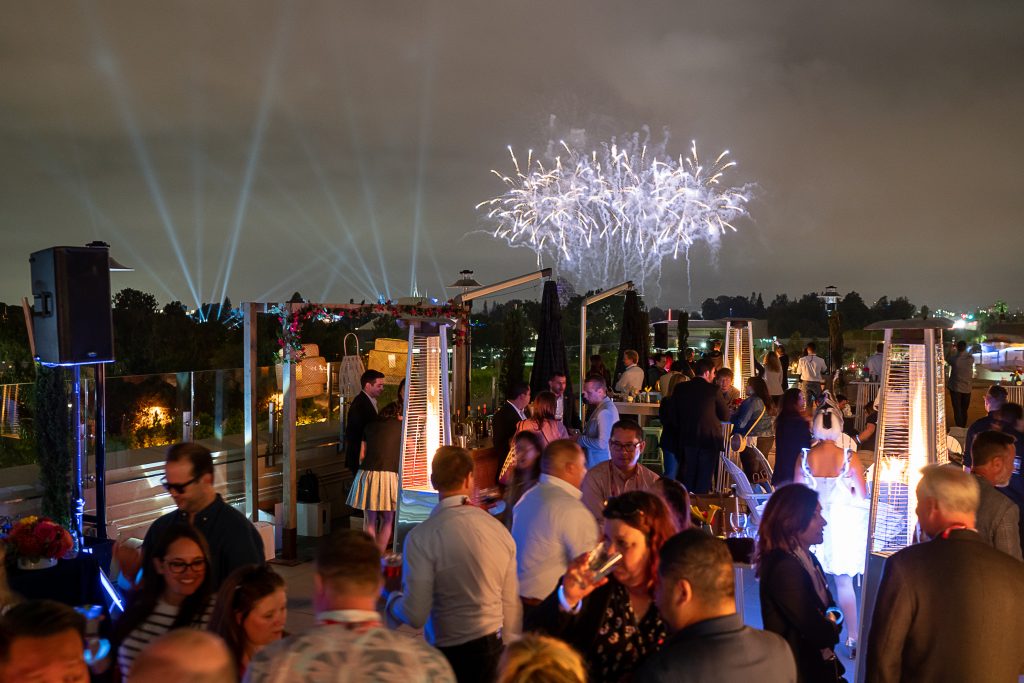 On June 20th, SDTA hosted a luncheon in, and invited the members of Japanese Tour Operator Association known as “Agent Kai”. 12 San Diego partners joined Riki Suzuki, Tourism Development Manager, in Torrance for this opportunity to network with key Japanese operators based in the LA area. The event was well attended with 24 clients to whom Riki provided the updated information of San Diego through the presentation during a luncheon. 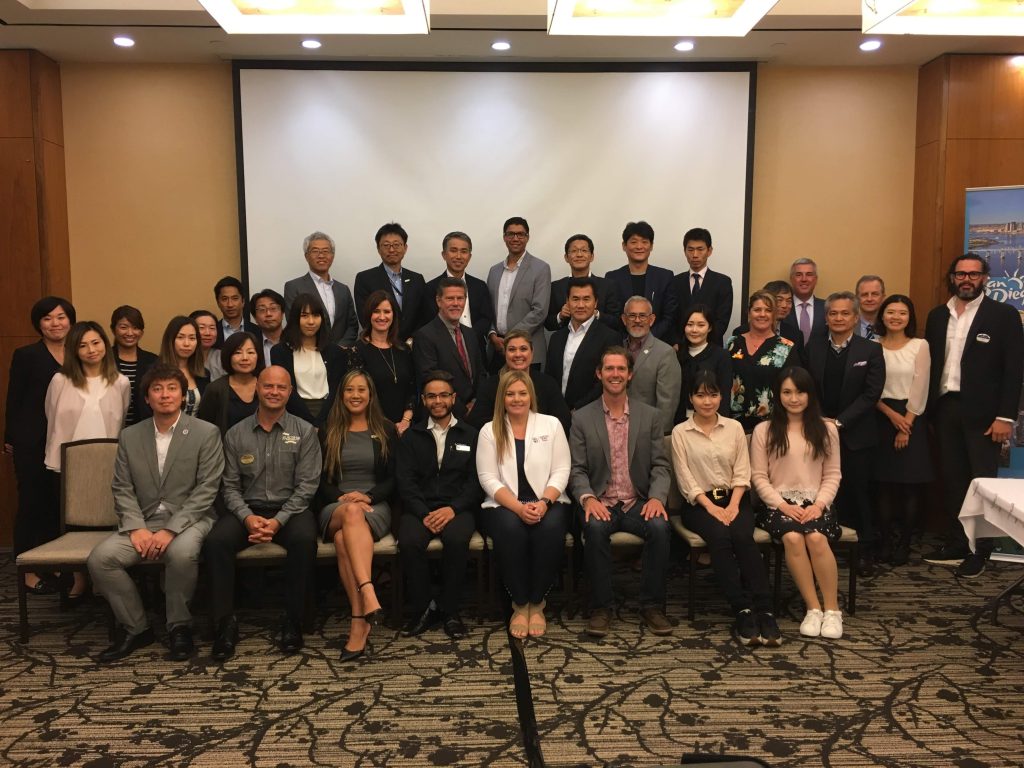 On June 27th and 28th, Angel Lee, Travel Trade Representative in Beijing, participated in Club California Product Development Series in Beijing. 11 key tour operators, wholesalers and OTAs in the region joined the session where Angel delivered the destination presentation and met with each of them on One-on-one meetings. Also, this final Club CA session for FY19 included a special brunch meeting with 10 members of the California Advisory Board. The aim was to build closer relationships and enhance understanding of the impact of the current China-U.S. trade tension on selling California tour products. 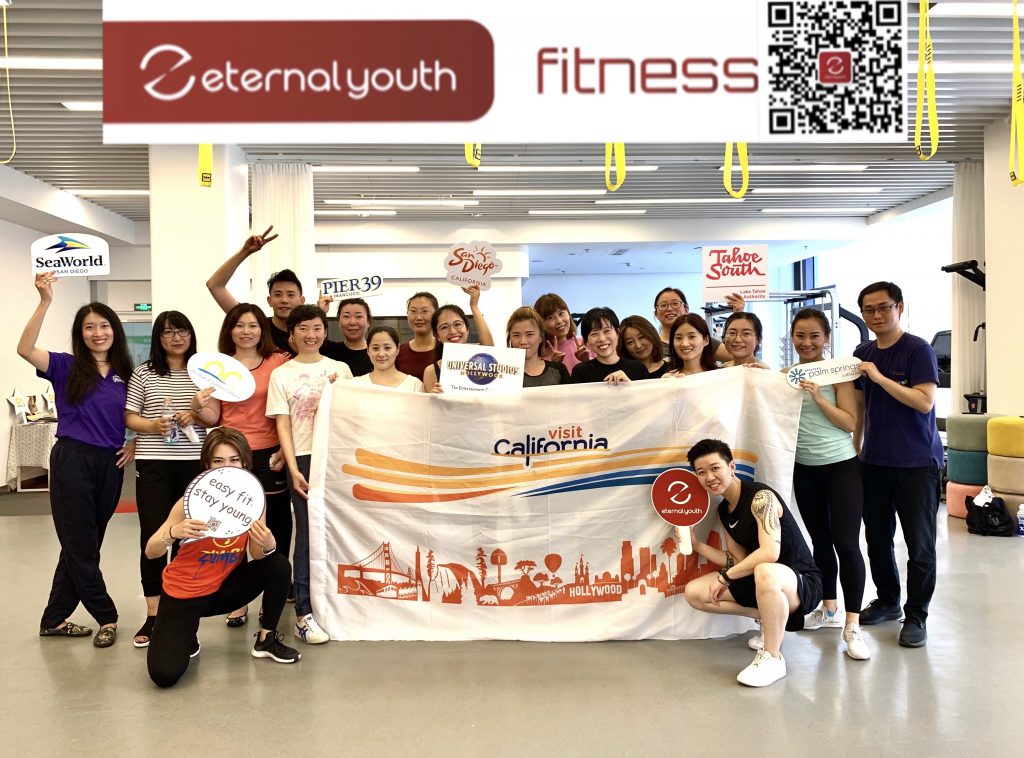 Denise Heredia, Travel Trade Representative in Mexico participated in the annual Best of the Best event organized by Travel Impressions in Quintana Roo.  More than 200 travel agents from the top feeder markets throughout Mexico were trained on how to sell San Diego.