Below are the January 2019 sales & marketing highlights from various departments from the San Diego Tourism Authority.

January marked the launch of the SDTA’s winter/spring advertising program and the new, refreshed brand campaign called, “Something to Smile About”. The campaign includes a range of visual treatments showcasing positivity—and smiles—in the environment as well as a variety of copy constructs including “I 😊 SD” and “Find Your (insert adjective) Smile” executions that provide flexibility across high-level brand communications and deeper experiential storytelling. Three new television commercials were produced:

All commercials are music-driven and feature a range of vignettes in the same style as our previous commercials.

The “Something to Smile About” television and digital video programs continue to serve as the foundation of the brand awareness advertising layer leading up to the spring and summer travel season. 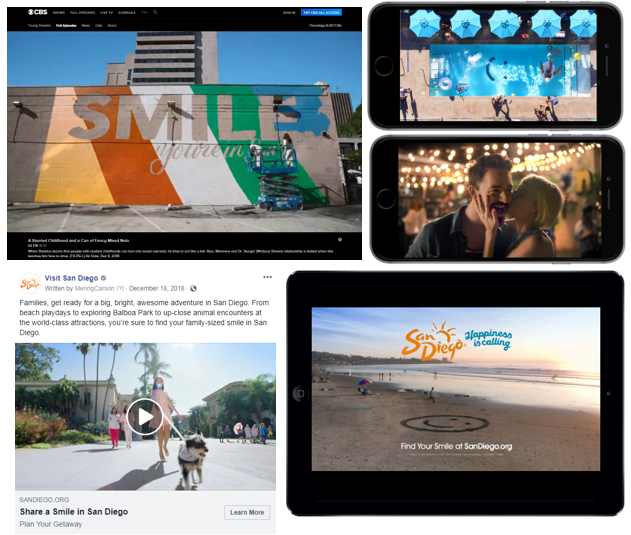 The “Something to Smile About” campaign creative was rotated into SDTA’s national foundational digital pull-through campaign, which launched in November with Sojern, Adara, Quantcast, Google Display Network, Expedia and Priceline and will continue through May.

And in an effort to increase hotel demand through maximizing the length of stay, SDTA also launched a new messaging strategy in January within the pull-through program called “Stay Another Night”. The campaign will focus on mid- and lower-funnel media tactics targeted to consumers that have already shown intent to travel to San Diego either through search behavior or strong engagement with other campaign layers and will prompt them to stay longer through messaging that hits on their key motivators: (1) travel + hotel discounts that promote longer stays and (2) content communicating can’t-miss experiences and multi-day itineraries that show visitors how to maximize their vacation time in San Diego. 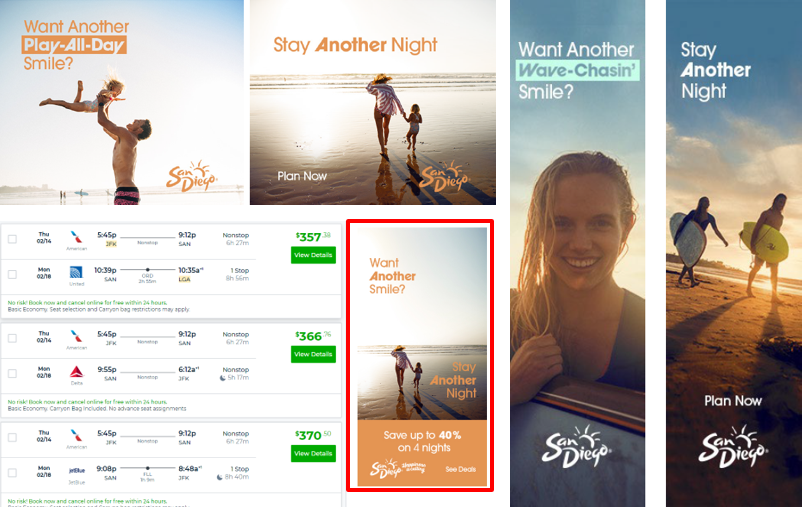 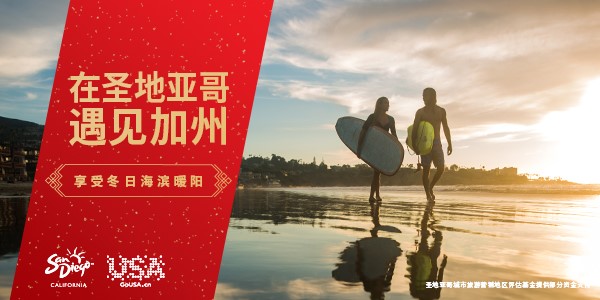 CANADA
The “Something to Smile About” creative was also integrated into SDTA’s advertising program of work in Canada including national cable television, digital and online travel agency programs. January marked the end of the first of two media flights in Canada. The second flight will launch in May. In total, $363,528 was spent in Canada during January with 18.32% contributed by Brand USA and affinity partners, delivering 33.5 million impressions. 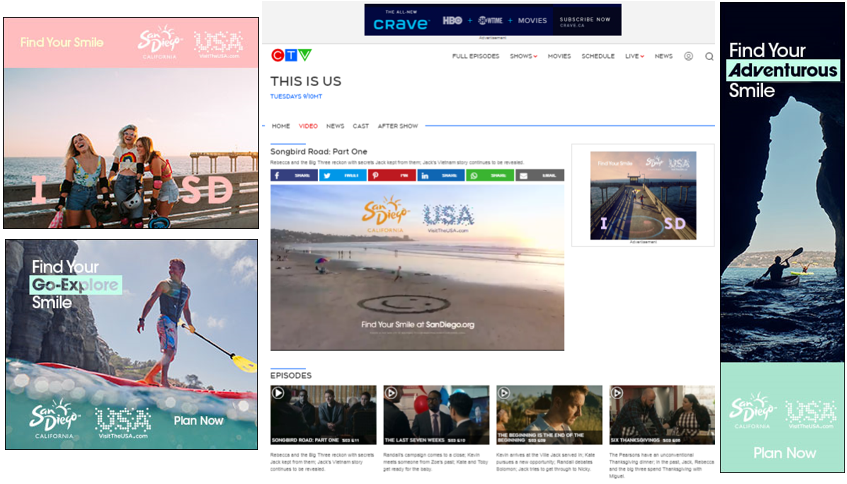 UNITED KINGDOM
The $1.1 million consumer direct advertising program in the United Kingdom launched in January and will continue through March, with 25 percent of total media spend ($309,919) contributed by Brand USA and affinity partner uplift funds. In total, the program is estimated to deliver 112.1 million impressions.

Digital advertising continues to serve as the foundational layer in the United Kingdom. Digital video, display, native, social and search marketing is running on YouTube Trueview, Google Display Network, AVID, TripAdvisor and Facebook. Complementing the digital program is out-of-home advertising including digital boards and video screens in high traffic underground stations such as Waterloo, King’s Cross, Victoria and London Bridge. The out-of-home units ran for four weeks at the beginning of the flight, January 14 – February 10.

In January, $224,677 was spent in the United Kingdom with approximately 56.8% contributed by Brand USA and affinity partners delivering just over 32 million impressions. 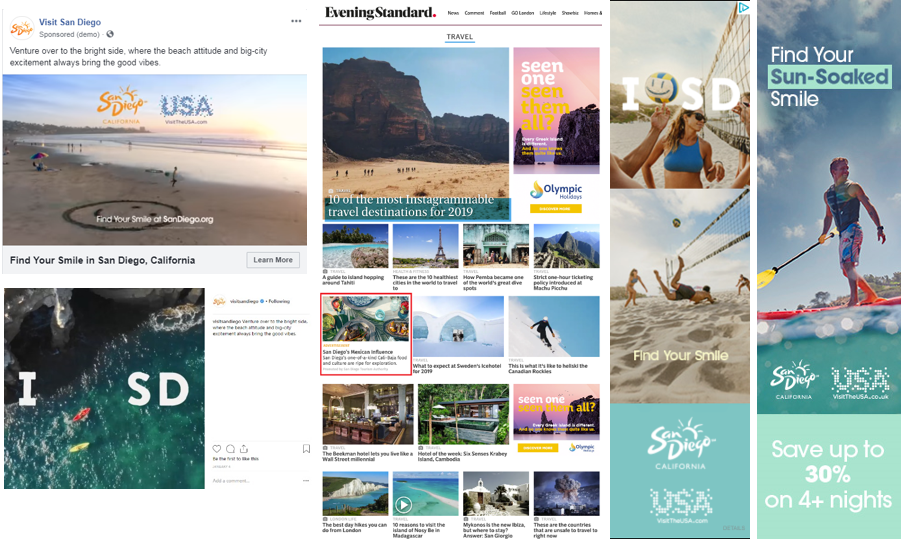 MEXICO
To build on the foundational trade and public relations efforts in Mexico, SDTA launched its first consumer direct advertising campaign in the Mexico market. The $500,000 national digital campaign targeted to affluent households will run January through March and is estimated to deliver 88 million impressions across Facebook, Instagram, YouTube and TripAdvisor. The “Something to Smile About” campaign was localized for the Mexico with in-language video and digital creative that appeals to the family travel mindset.

In January, $120,000 was spent in Mexico with 16.67% contributed by Brand USA and affinity partners delivering 24.1 million impressions. 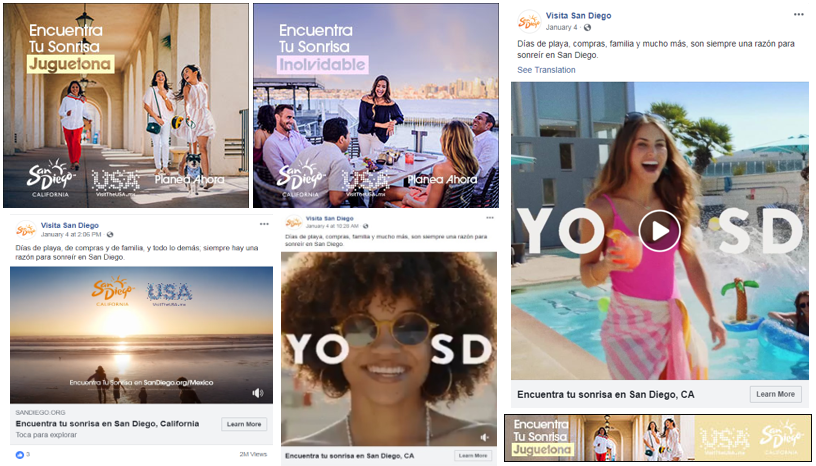 SDTA partnered with Best Day, one of the largest online travel agencies in Mexico, to drive awareness and inspiration for the Cali-Baja Experiencia, a unique two-nation vacation campaign featuring the San Diego and Northern Baja regions.  The $50,000 Cali-Baja Experiencia campaign launched in January will continue through March, complementing SDTA’s consumer direct advertising campaign in key markets including Mexico City, Guadalajara, Monterrey and Leon.

The co-branded digital creative promoting the mega-region will run on the Best Day website, Google Display Network, and dedicated email blasts – all driving back to a custom microsite that includes hotel and activity packages,, itineraries and top attractions for San Diego and the main cities in Baja Norte (Tijuana, Tecate, Rosarito and Ensenada). To complement the digital program, SDTA launched an out-of-home layer which includes video creative in top trafficked mall kiosks displaying San Diego’s “Speaking of San Diego” Spanish video along with the Cali-Baja experiencia creative. 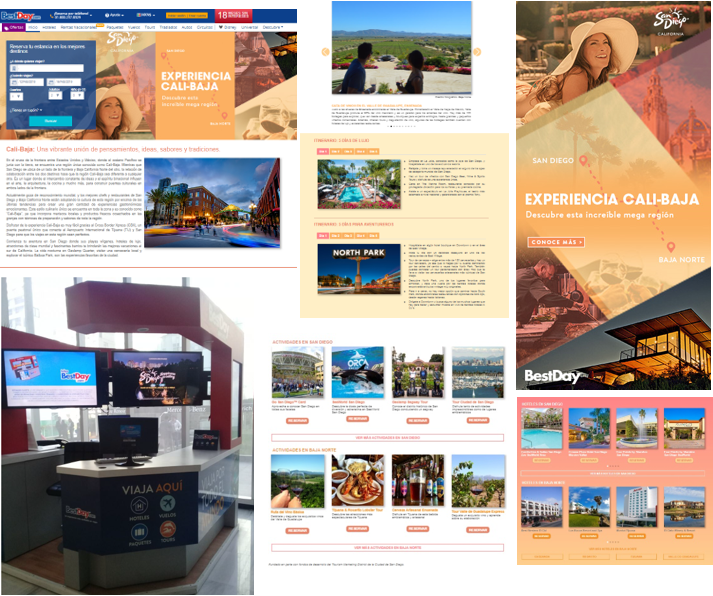 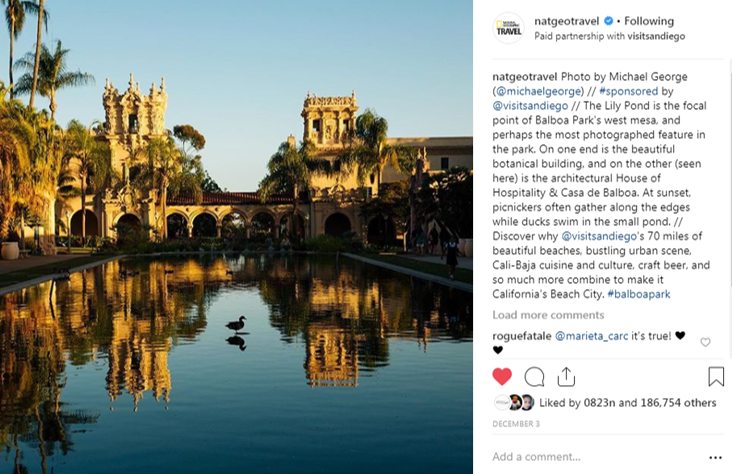 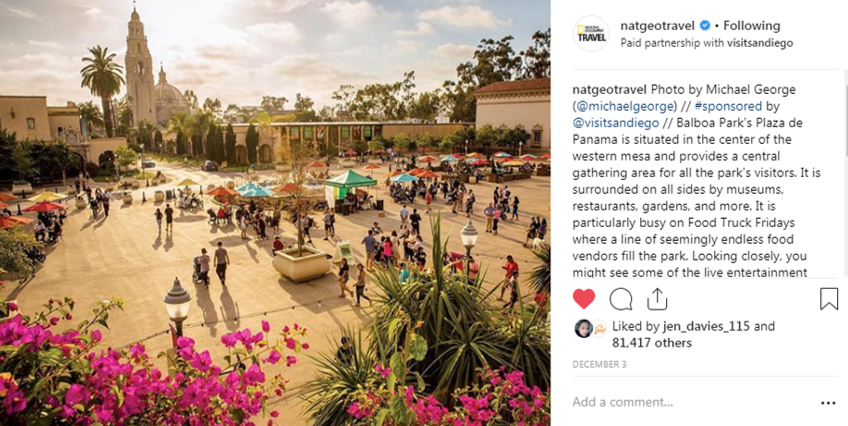 Web traffic for January included 1.2 million user sessions between the desktop and mobile websites (excluding Travel Blog). The team posted a total of 149 Tweets, 25 Facebook posts, 19 Instagram posts, and 4 Instagram Stories through social channels. There were 9 blogs and 8 consumer emails published this month. 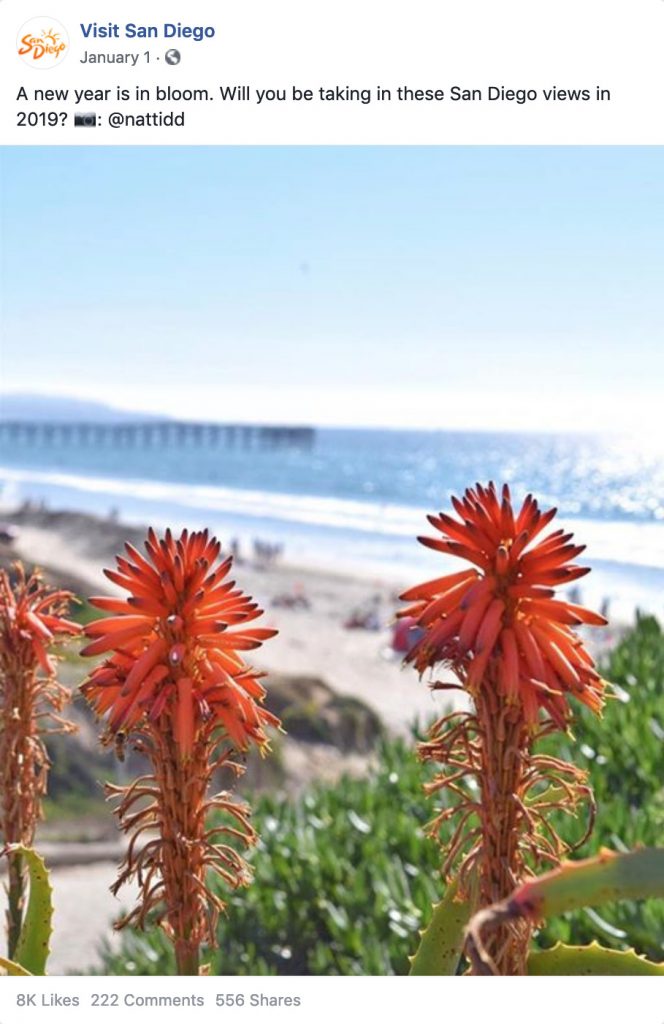 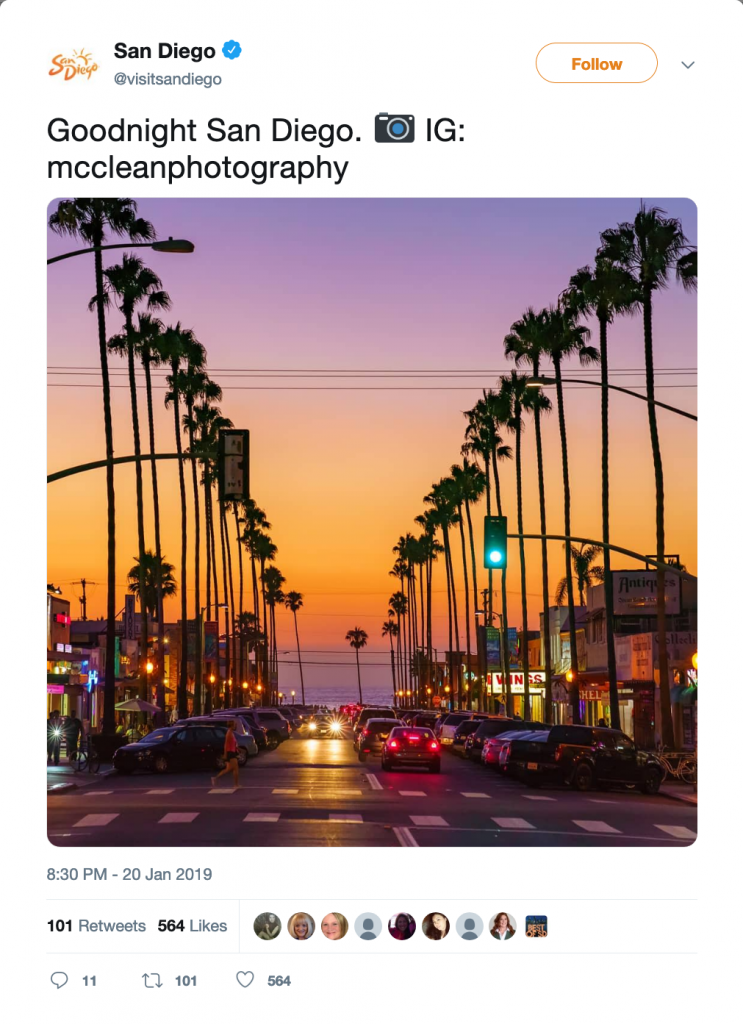 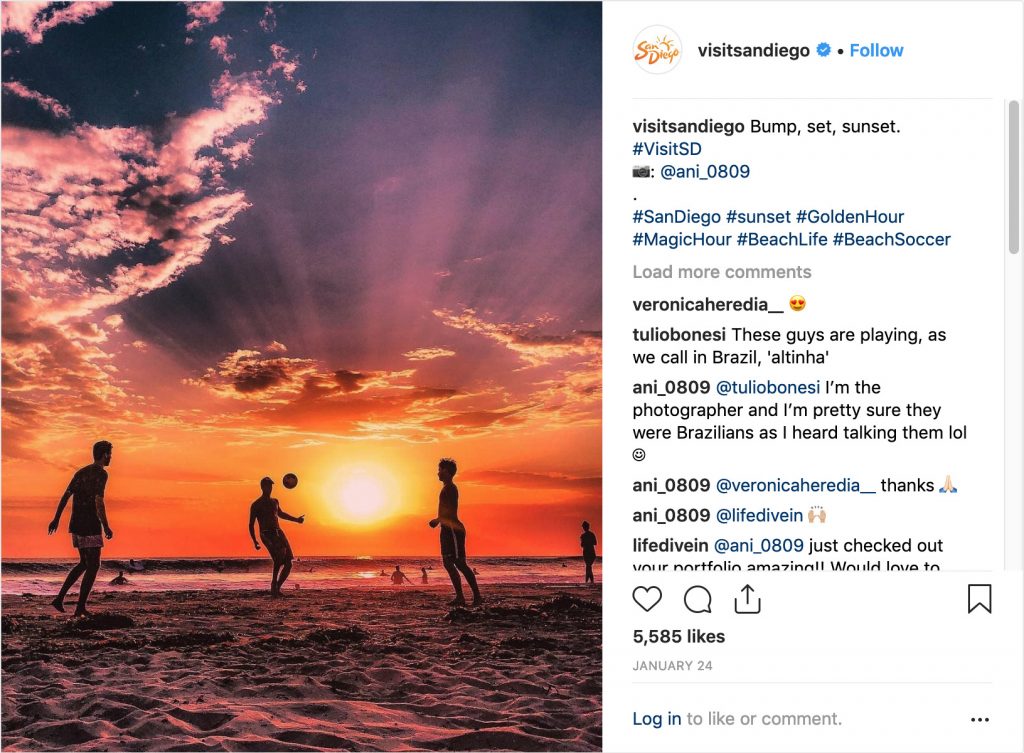 Overall sessions to the China website in January (sandiego.com.cn) was 85,670. The social media team, in partnership with Hylink, published a total of 20 Weibo posts, and 4 WeChat posts.

Overall traffic to the Mexico page in January was 29,104 unique users. The social media team, in partnership with PR Central, published a total of 13 Facebook posts and 9 Instagram posts.

Overall traffic to the Japan page was 2,438 unique users. The social media team, in partnership with aviaREPs, published a total of 18 Facebook posts. 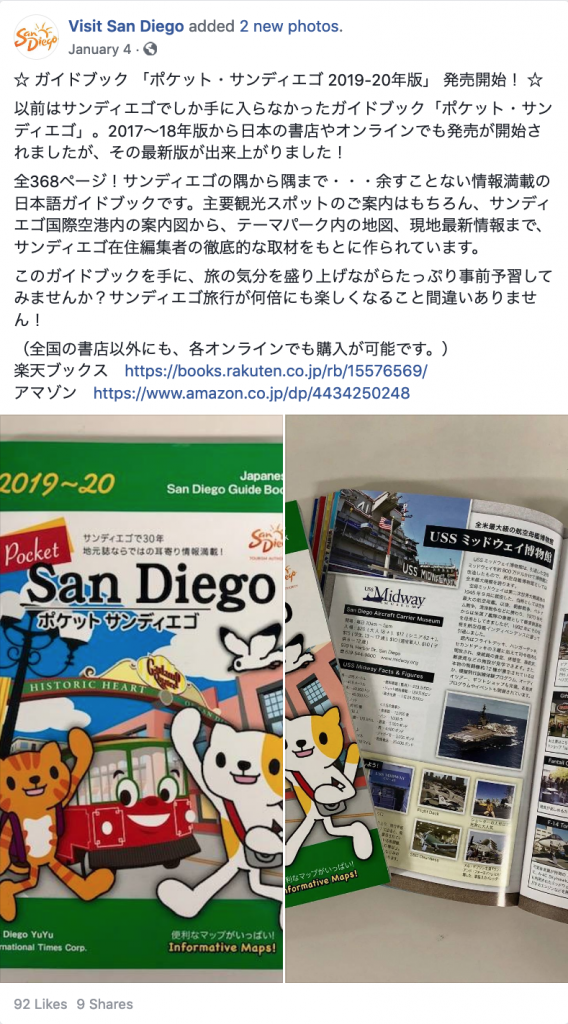 LinkedIn grew by 0.6% from last month to 7,351 followers, earning more than 2,673 impressions. Year-over-Year the LinkedIn Audience grew by 20%. 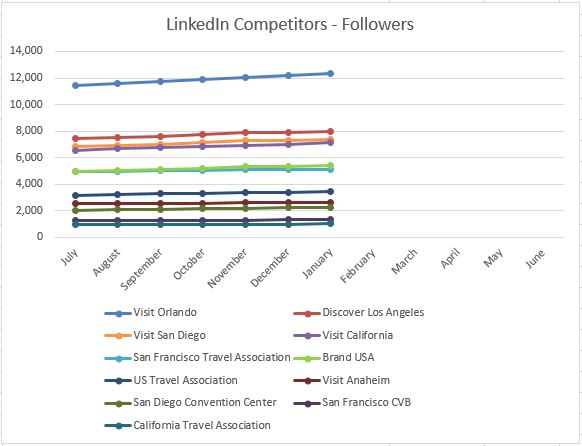 @SDTAConnect Twitter base grew by 8.8% YoY to 3,925 followers. There were 12 tweets during the month. 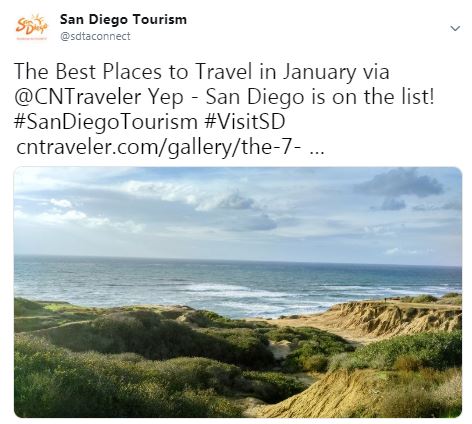 The B2B Account earned over 26,000 impressions during the month of January.

6 Members attended the Open Office Hours to learn how to best maximize benefits.

In January the team visited, met or attended events with these Members:

The Hotel Meetings Sales team kicked off the calendar year booking 59 meetings, representing 28,461 room nights in the month of January.  Fiscal year to date, the team has converted 408 bookings and 221,684 total room nights for the destination.

In January, the sales and events team attended two of the largest industry tradeshows with PCMA Convene in Pittsburgh, PA and RCMA Emerge in Greensboro, NC.  Through both shows, 9 group leads were generated, representing 11,434 room nights.  In addition, Ernie Rossow, National Sales Director, conducted sales calls in Arizona with key meeting planners from Premier Event Resources, Superior Meetings, Plexus, ASLM, The Scarritt Group, HPN, and the headquarter office of HelmsBriscoe.  Thus far 3 leads have been generated with more on the way. 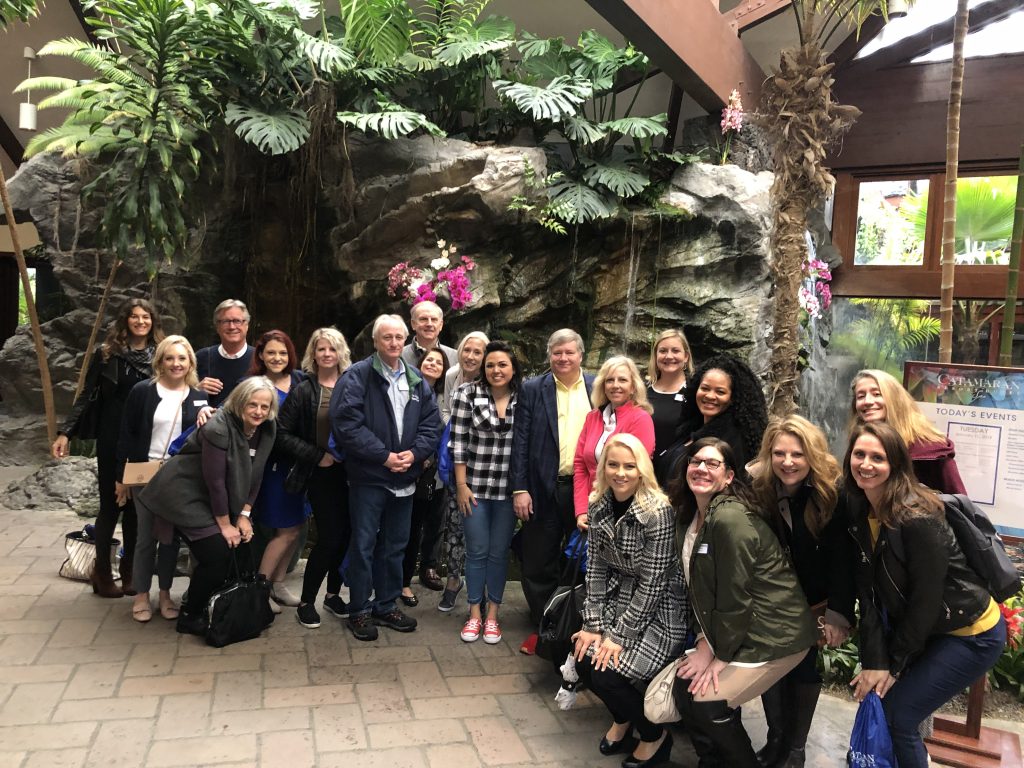 In partnership with Connect Meetings, we conducted a successful fam trip bringing 18 meeting planners that represent high-end corporate and association meetings.  These planners were exposed to 28 hotels and 3 venues, with many experiencing San Diego for the first time. Check out the post from one of the planners, Sarah Buchbinder with Meetings Made Easy… 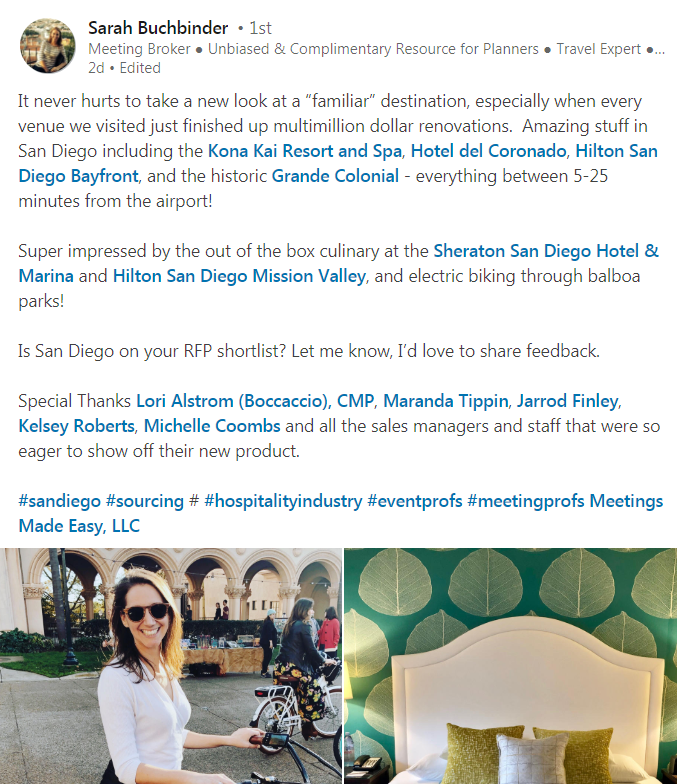 The Site Experience team had a busy month, with 15 client site experiences, creating exposure to 44 hotels.

Communications hosted a number of media from around the world, including three top Chinese media outlets and a notable KOL on a three-night visit to San Diego. Publicizing the “Best of California” in partnership with San Francisco, the group’s itinerary highlighted our city’s natural beauty, family attractions, rich history, unique food and culture, and colorful neighborhoods. 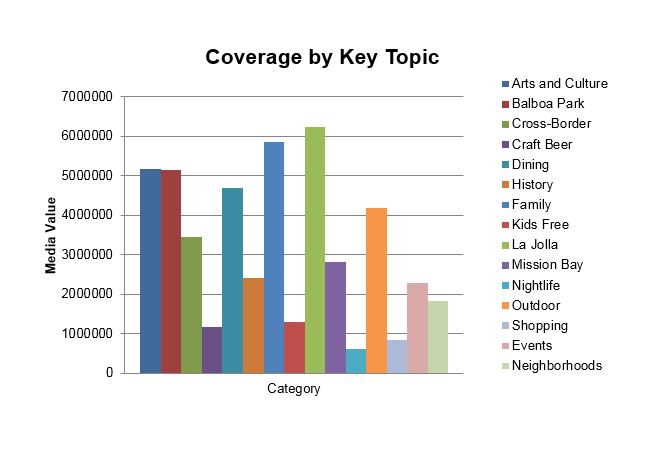 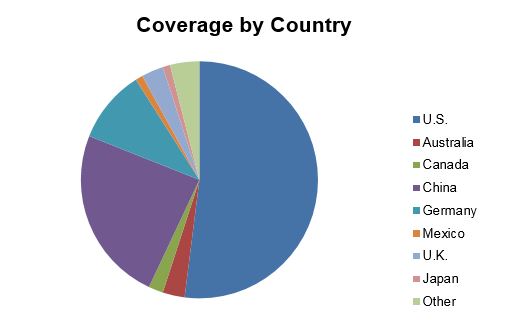 Phil Hannes, Sr. Director of International Marketing was in Mexico City with PR Central (SDTA Representation) hosting a breakfast presentation to train 90 agents from Best Day Travel who manage the shopping center travel kiosks.  This was a 2-hour training session on how to sell San Diego to support the Cali-Baja Experience campaign currently featured in Mexico. 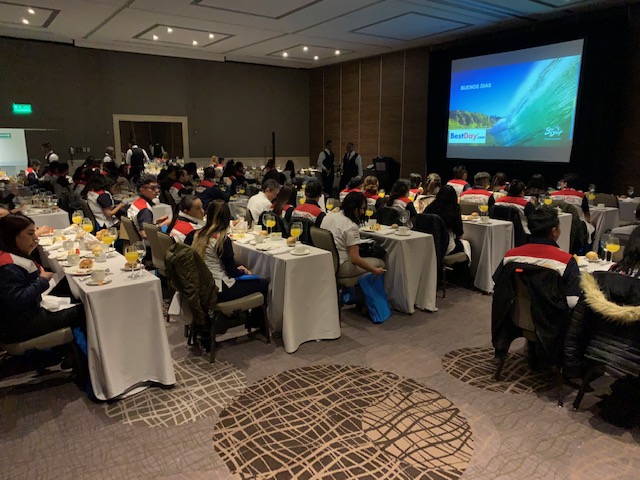 Angel Lee, Travel Trade Representative in Beijing, participated in Club California Product Development Series in Beijing from January 9th to 10th. Ten key tour operators, wholesalers and OTAs in the region joined the sessions where Angel delivered the destination presentations and met with each of them on One-on-one meetings.

Tomoe Matsunaga, Travel Trade Representative in Tokyo, participated in the Club California Nagoya event on January 25th. The event welcomed over 30 travel trade professionals, where Tomoe gave a presentation to promote San Diego and network with the attendees. 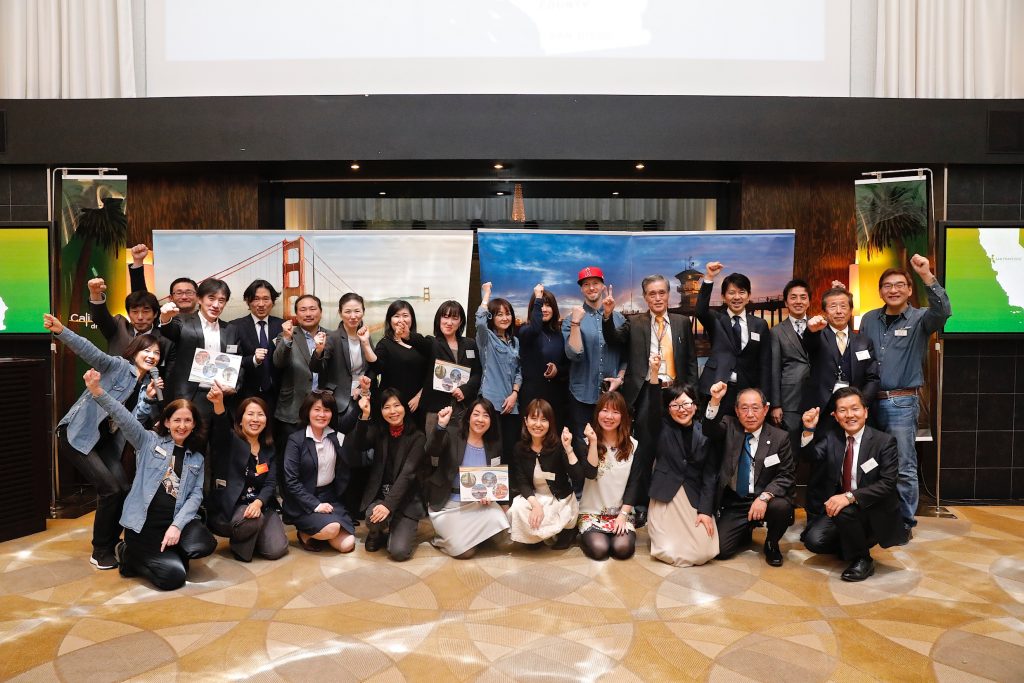 Riki Suzuki, Tourism Development Manager, invited the Ctrip market manager to come to San Diego to meet with SDTA member hotels. A free workshop was organized for members to learn about the Ctrip, the largest OTA in China, and how to work with them effectively. Following the workshop, SDTA also organized one-on-one meetings for the members with Ctrip .

San Diego was the Featured Destination at the Visit USA Switzerland show in Zurich on January 30th. The SDTA, along with the San Diego International Airport and Edelweiss Airlines headlined the event that saw over 400 travel agents from across Switzerland attend.  Tourism Development Director Benjamin Eastman showcased the destination during a 30-minute stage presentation, as well as in small group workshops for an additional 15-minutes of destination insight – providing attendees with a multitude of information about the destination, the regional non-stop flights their clients can use, etc.  Joining the SDTA were representatives of 5 hotels and 2 attraction/activities – and there was brochure & video distribution from an additional 6 members. 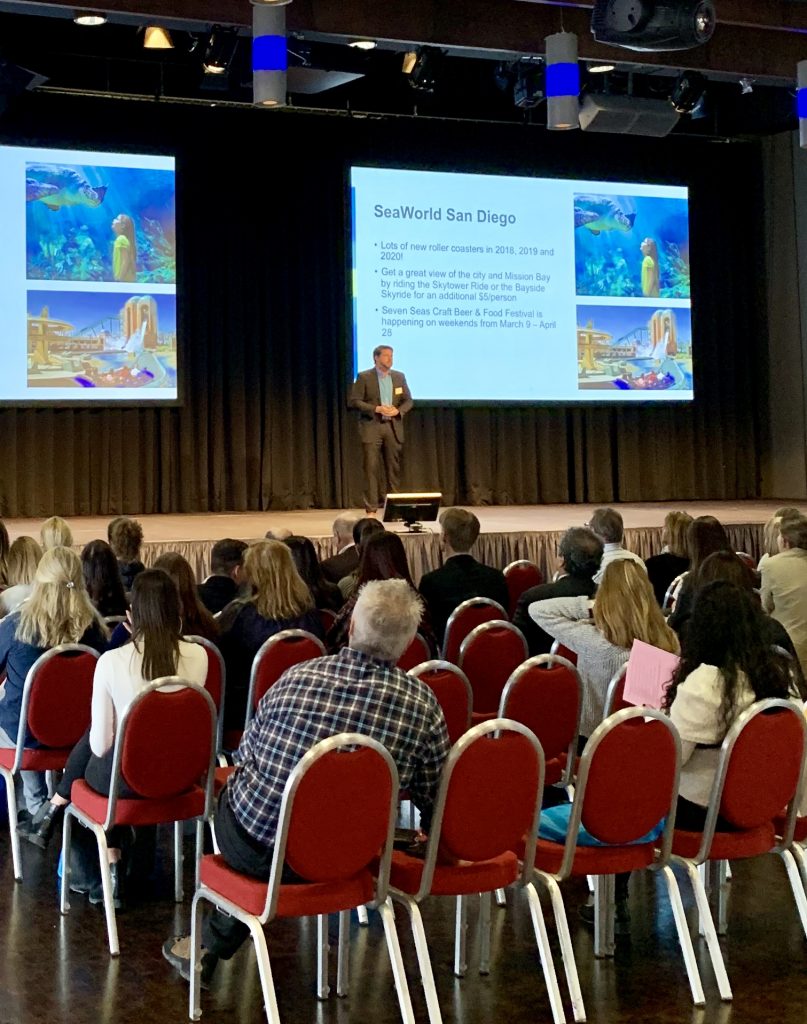 During the month of January, SDTA hosted 5 agents from Flight Centre Vancouver and 3 from Sun Fun Tours Canada in preparation of bringing a group to San Diego at the end of the month for two days to experience Balboa Park, USS Midway, and other local attractions.