Below are the October 2018 sales & marketing highlights from various departments from the San Diego Tourism Authority.

The Awesome All Year campaign wrapped up in October, delivering 27.3 million impressions with $436,672 in media spend in Los Angeles, Phoenix and Las Vegas. The digital out-of-home placements and paid social showcased the variety of San Diego’s fall events to stimulate immediate interest and drive consideration to visit San Diego during the fall.

In order to create additional exposure and reach for the destination, SDTA negotiated brand advertising placements to complement the custom elements of the program. National television and digital display placements launched in October in the United States and will follow in November in Canada and January in the United Kingdom.

In October, SDTA launched phase two of the San Diego-San Francisco “Best of California” co-op campaign running on Ctrip. Joint destination advertising executions from phase one are replaced with individual destination promotion under “Best of California” umbrella positioning during phase two but joint destination product is still promoted. Total campaign spend of the month of October was $58,426 with 16% contributed by BrandUSA and affinity partners and a total estimated 10.7 million impressions.

SDTA once again partnered with Brand USA to participate in their custom Single’s Day promotion on Fliggy. Similar to Black Friday in the U.S., Singles Day (November 11) is the world’s largest e-commerce event created by Alibaba. San Diego and San Francisco also partnered up within this program to run the “Best of California” campaign and joint destination product. The digital portion of the campaign launched in October and will run through November.

SDTA spend for October was $36,000 with an estimated total of 12.7 million impressions.

SDTA’s consumer direct advertising program in Germany launched in late October with digital out-of-home city column and video info screen placements in the Frankfurt market. Out-of-home will run through mid-December and will be complemented with a robust digital program running November through mid-January featuring video and display units. The total Germany media investment of $600,000 (including $100,000 in partner contribution from Brand USA) is expected to deliver almost 116 million impressions throughout the flight.

Web traffic for September included 897,997 user sessions between the desktop and mobile websites (excluding Travel Blog). The team posted a total of 104 Tweets, 24 Facebook posts, and 17 Instagram posts, and 7 Instagram Stories through our social channels. There were 8 blogs and 6 consumer emails published this month. 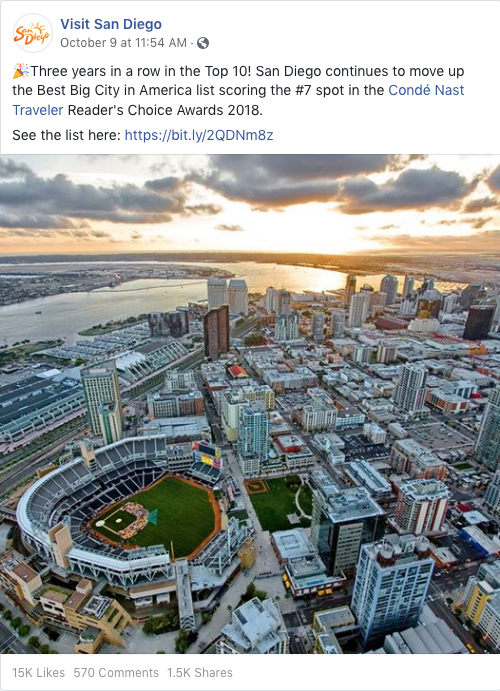 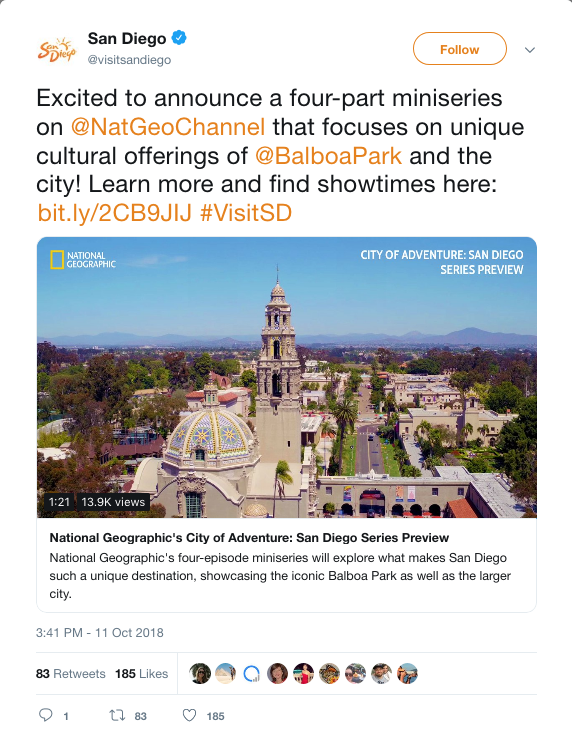 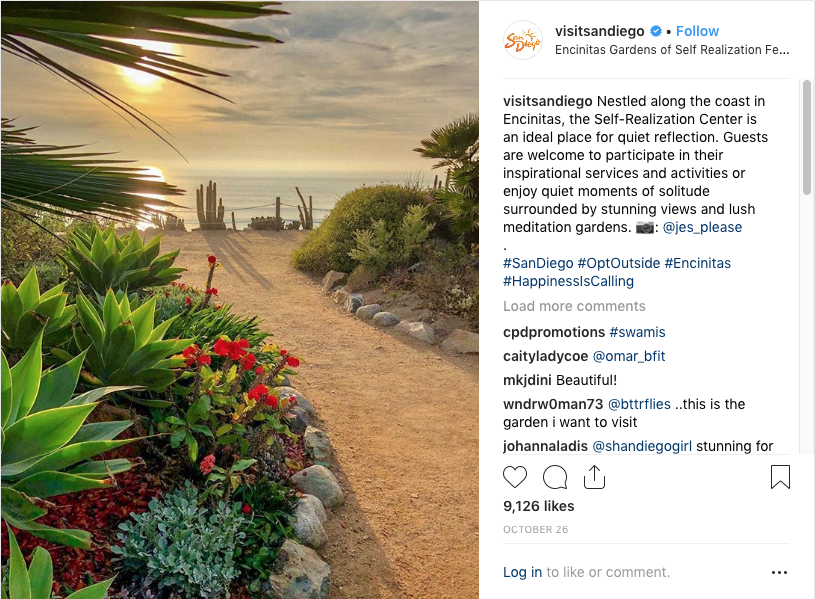 Overall traffic to the China website (sandiego.com.cn) was 2,655. The social media team, in partnership with Hylink, published a total of 31 Weibo posts and 4 WeChat posts.

Overall traffic to the Mexico page was 1,447 unique users. The social media team, in partnership with PR Central, published a total of 7 Facebook posts and 5 Instagram posts.

Overall traffic to the Japan page was 2,324 unique users. The social media team, in partnership with aviaREPs, published a total of 17 Facebook posts. 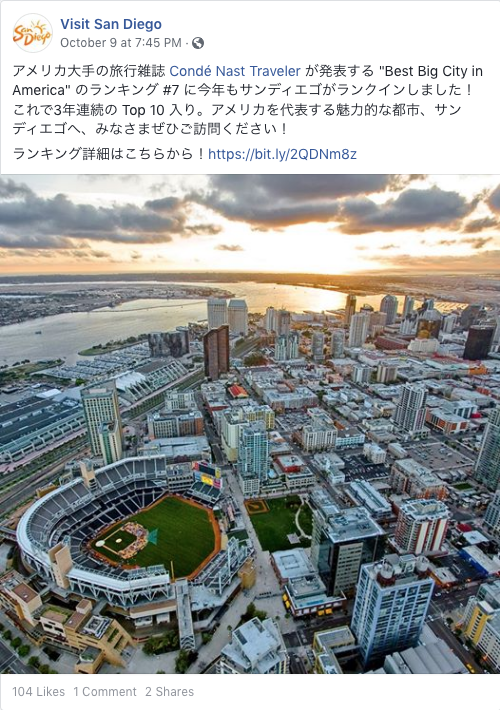 @SDTAConnect Twitter base grew by 10 YoY to 3,877 followers. There were 35 tweets during the month.

This month, the tweet with the most exposure was coverage of the world premiere of National Geographic’s four-part miniseries on Balboa Park. 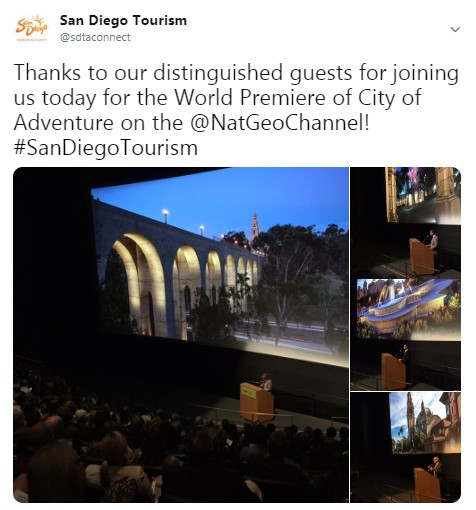 The tweet with the most engagement showcased a series of photos from National Geographic promoting the upcoming mini-series. 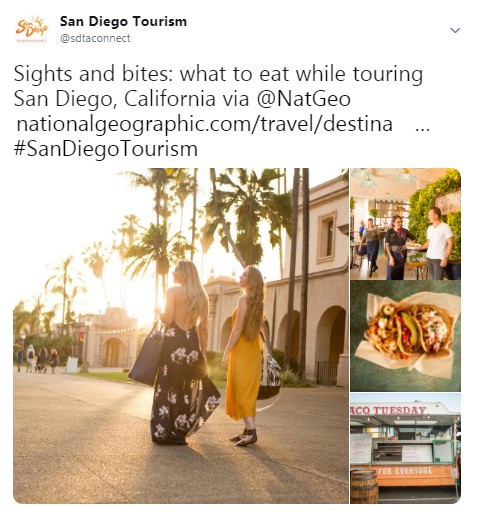 The B2B Account earned nearly 23,000 impressions during the month of October and increased by 10% YoY.

The team was proud to present Members our 2018 Fall Sales & Marketing Workshop. Over 500 Members registered for the educational and networking event. The team also secured over $27,000 in sponsorship to make sure the event was offered to Members at no cost.

Member outreach
In October the team visited, met or attended events with these Members:

The Hotel Meetings Sales team had another strong month in October, booking 51 meetings, representing 27,612 room nights.  Fiscal year to date, the team has converted 204 bookings and 105,874 total room nights for the destination.

Annually, October brings us one of the more successful trade shows in IMEX America in Las Vegas.  Over 6,300 meeting planners and influencers attend from 63 countries around the world.  This year, 18 hotel partners and members joined within our San Diego booth conducting 414 one on one appointments with clients over the course of 3 days.  In addition, we conducted 9 group presentations to 85 meeting planners for added San Diego exposure.

Also in October, Ernie Rossow, National Sales Director was joined by 9 hotel partners to host 2 successful client events in Denver.  44 clients were in attendance at the two events with key clients in attendance from Kinsley Meetings, Global Cynergies and the ITA Group amongst a multitude of other high-end corporate clients.

The Site Experience team had a great October, with 13 client site experiences, creating exposure to 54 hotels and 4 venues.

The Site Experience Awards recognize excellence in the tourism/hospitality industry in San Diego. The honor represents the highest level of professionalism, customer experience, and results in bringing new business to the destination. This award is presented not only quarterly to a salesperson and a sales team within the San Diego region but also annually at our October Sales and Marketing Workshop. 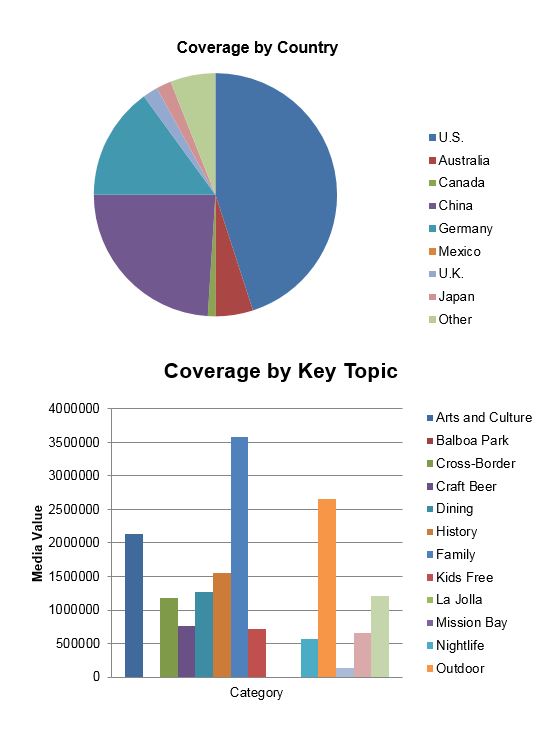 In early October, the UK Office participated in the Visit USA UK Roadshow where they met and trained agents on the destination in Manchester, Birmingham & London.  In all, they met with nearly 300 agents during the roadshow.

Benjamin Eastman joined the Visit California Canada Sales Mission in early October where he attended events in Toronto, Montreal, Calgary & Vancouver. Benjamin was able to network and train nearly 300 agents over the 10 events held during the week.

Denise Heredia, Travel Trade Representative in Mexico participated in the CCRA Travel Network event in Piso 51 where she presented what’s new in San Diego and instructions on how to access the Specialist Program to over 100 travel agents in Mexico City.

Denise Heredia, Travel Trade Representative in Mexico participated in the Brand USA Road Show covering the cities of Monterrey, Leon and Aguascalientes.  San Diego presentations and information were distributed to over 247 travel agents.

Tomoe Matsunaga, Travel Trade Representative in Tokyo, participated in the Club California Tokyo event on October 23rd. The event welcomed over 100 travel trade professionals, where Tomoe gave a presentation to promote San Diego and network with the attendees.

Tourism Development hosted 7 International Agent fams during October.  The UK Super FAM Finale brought four groups of 10 agents to San Diego for two nights with a final event at Balboa Park where Visit California staff and San Diego members participated. US Airtours brought in 7 agents from the UK for two days staying at the Catamaran Resort Hotel while learning about San Diego experiences.  15 product buyers from China were with the Galaxy Fam Group where they spent a full day experiencing the key attractions and activities in San Diego.  Two leads were generated from this group for future business.  Tourism Development team hosted the Brand USA China fam with 15 participants to experience the USS Midway, SeaWorld, San Diego Zoo, Balboa Park and Stone Brewery at Liberty Station.  Other fam groups included VCA Canada, Willy Scharnow Foundation Fam of 15 agents and TravCo.