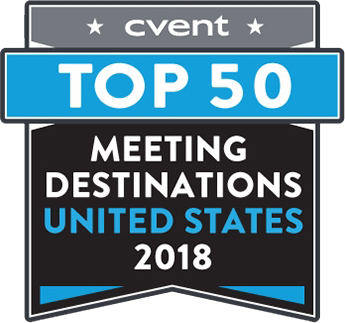 We are excited to share some great news with you. San Diego earned the No. 4 spot on the Cvent 2018 Top 50 Meeting Destinations list! As a destination, we’ve moved up one spot from last year, so let’s keep the momentum going. This industry-specific ranking is based on many factors including meeting and event booking activity as well as the number of unique venues in the destination.

Cvent evaluated more than 5,000 U.S. cities featured on the Cvent Supplier Network to compile the annual list. Activity was tracked from January 1, 2017 to December 31, 2017 and the ranking was then determined by a set of qualifying criteria consisting of:

“With meetings representing more than 13% of total travel and tourism spending and generating $845 billion in sales in the U.S. alone, they have become a major economic driver for these markets,” said Chris McAndrews, Vice President of Marketing for Cvent’s Hospitality Cloud. “The cities featured in this year’s Top Destinations lists have invested significant time, energy, and resources into building premier locations that entice organizations, large and small, to plan meetings and events in their areas.”

San Diego improved its place in the Top 5 with new inventory coming online in the coming months. Considering San Diego has significantly less meeting space at its primary convention center compared to other top destinations, it’s rewarding to see San Diego rank so highly.  This is due in part to its diverse offerings of meeting and conference hotels, award-winning convention center, unique regions, and exceptional attractions and third-party venues.

Check out unique meeting and event spaces in San Diego on the official Meeting Lists at SanDiego.org.