Below are the June 2018 sales & marketing highlights from various departments from the San Diego Tourism Authority.

The SDTA’s Foundational and “Always-On” digital content programs continued through June with distribution to national and spot market specific markets targeting Los Angeles and Phoenix. In total, the program delivered more than 25.1 million impressions during June, with $279,828 in advertising spend.

SDTA wrapped the summer consumer direct campaign in China with Ctrip, Fliggy and Baidu. Organic social campaigns continued throughout the month and will continue into FY19. SDTA’s China program for June delivered an estimated 24.8 million impressions with a total spend of $251 thousand with 72% contributed by BrandUSA and affinity partners.

SDTA’s social advertising program in Switzerland wrapped up in June. The campaign focused on generating awareness and inspiration for travel to San Diego with the Edelweiss Airlines. The total campaign spend was an estimated $30 thousand, delivering an estimated 4.2 million impressions. Sixteen percent of program spending was contributed by Brand USA uplift. 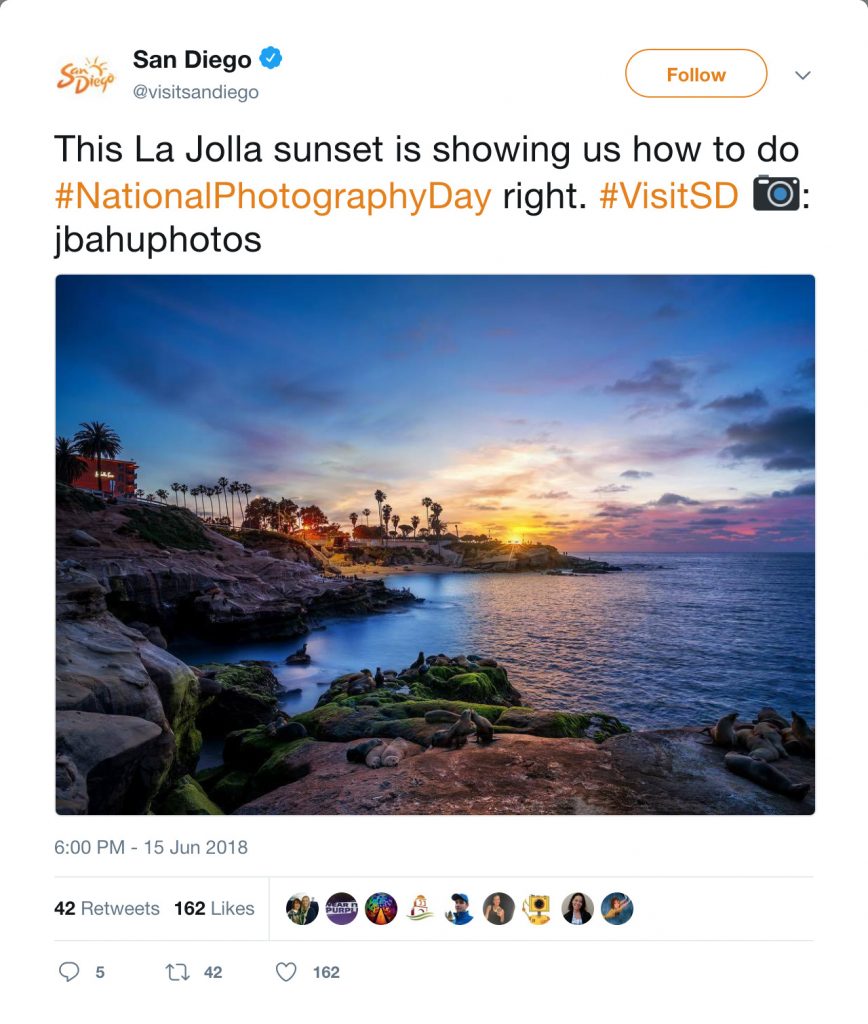 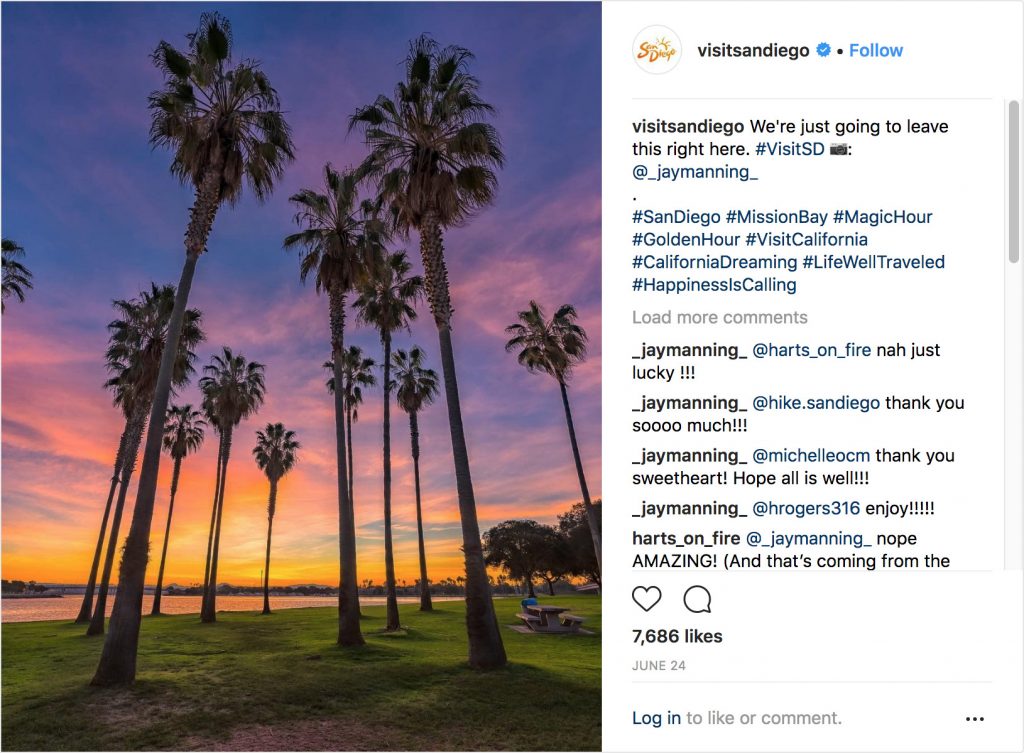 Overall traffic to the Luxury and Value pages on sandiego.org was 2,191 site visitors in May. The social media team, in partnership with Casual Fridays, launched the following campaigns: Scene in San Diego User Generated Content (All Regions), North Coastal Instagram Story.

The June B2B Postcard was delivered to 7,944 meeting planners as part of a year-long series of video emails. Each month a new video showcases San Diego icons, regions, businesses, or opportunities to inspire meeting and event planners. The open rate for the June B2B video postcard was 20% which represents over 1,572 unique meeting planners. The June video highlighted unique San Diego outdoor adventure suitable for group events, outings, and breakout sessions.

LinkedIn grew by 2 % from last month to 6,707 followers. Year-over-Year the LinkedIn Audience grew by 18%.

@SDTAConnect Twitter base grew by 1% from last month to 3,809 followers. There were 27 tweets during the month. 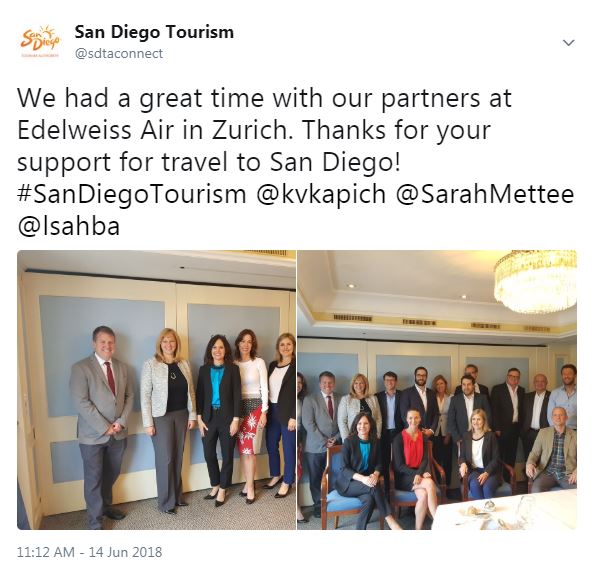 11 Members attended the Open Office Hours on the 22nd to learn how to best maximize benefits.

The team worked with the Padres and Petco Park Events to host Hospitality Industry Night on June 19th. 280 Members attended the networking event to celebrate the industry and outgoing SDTA Board Chair Dan Fullen had the honor of throwing out the ceremonial first pitch.

The Site Experience team had a busy June, with 18 client site experiences, creating exposure to 59 hotels and 10 venues.

For our fiscal year, we had a total of 232 client site experiences, resulting in 851 hotel sites and 228 venue sites.   This past year we saw hotels enjoy increased potential to secure a program with an engaged General Manager and Sales associate who built a rapport with the client and followed up following the site visit.

In addition, we conducted a Familiarization trip, June 11-14, bringing 15 clients to San Diego that had never been or has not been to San Diego in the past 5 years.  During the “Fam”, we visited and presented 17 hotels and 3 venues.

San Diego Meeting Certified has graduated five classes of hospitality professionals since the program’s February debut. This certification program is designed specifically for all Hotel Sales Managers, Directors of Sales, and General Managers. It provides you with an actionable plan for selling your property, neighborhood, and the destination to improve your hotel conversion rate. There are three remaining classes scheduled in 2018. FOR DETAILS AND TO REGISTER, CLICK HERE.

In partnership with Hainan Airlines, International PR Manager Joe Timko hosted a Chinese media FAM with three top travel media on a 5-night visit to San Diego including a day tour and overnight stay in Tijuana.  The San Diego itinerary showcased how the Tijuana airport serves as a gateway for travel into San Diego and highlighted popular family attractions, outdoor recreation, arts and culture, food, craft beer and diverse neighborhoods. 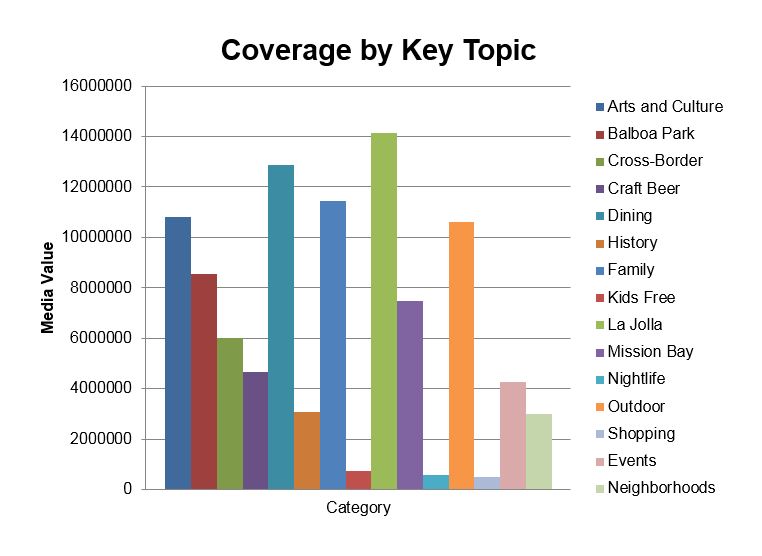 Two Club California Product Development Seminars took place in Shanghai and Beijing. Cherrie Yang and Anita Yu, Travel Trade Representative in Shanghai and Beijing, represented San Diego at each event. Both events welcomed around 10 key tour operators and wholesalers from the region where SDTA reps delivered the destination presentation and met with each of the accounts on One-on-one meetings. 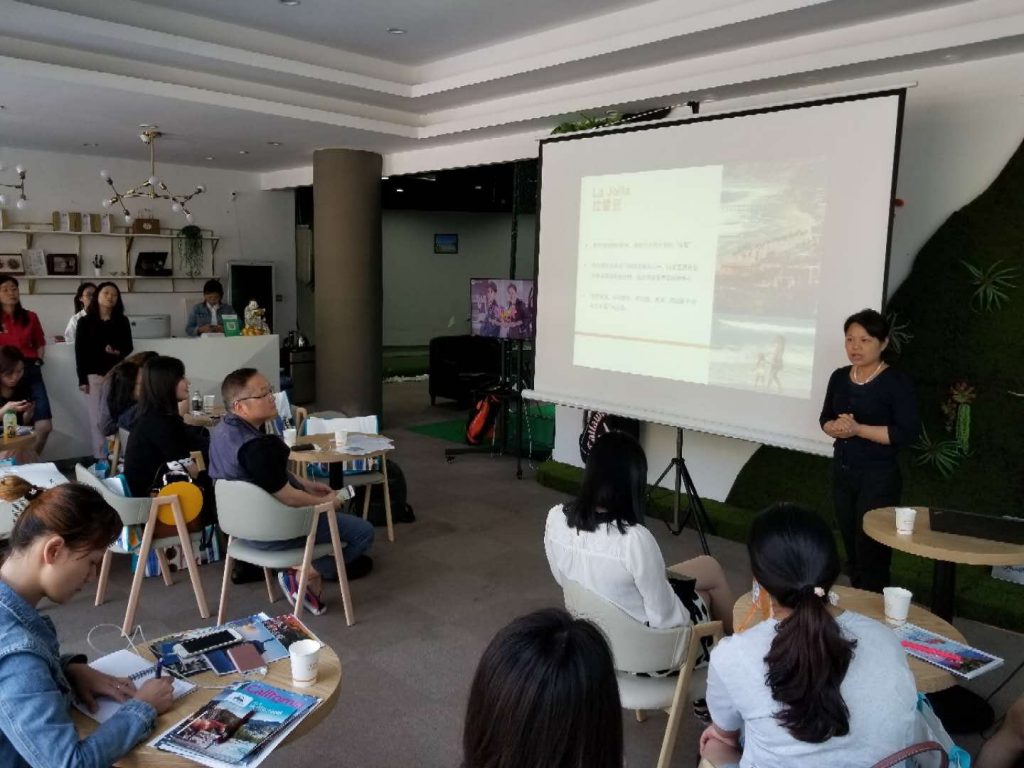 Benjamin Eastman led a group of five SDTA Members on the region’s first Germany-Switzerland Sales Mission.  In total the group visited 14 top Tour Operators in Hamburg, Hannover, Frankfurt and Zurich. The mission supported the region’s non-stop Lufthansa and Edelweiss flights and further cemented in the minds of German & Swiss operators how important it is to include multiple nights in San Diego in their clients’ itineraries. 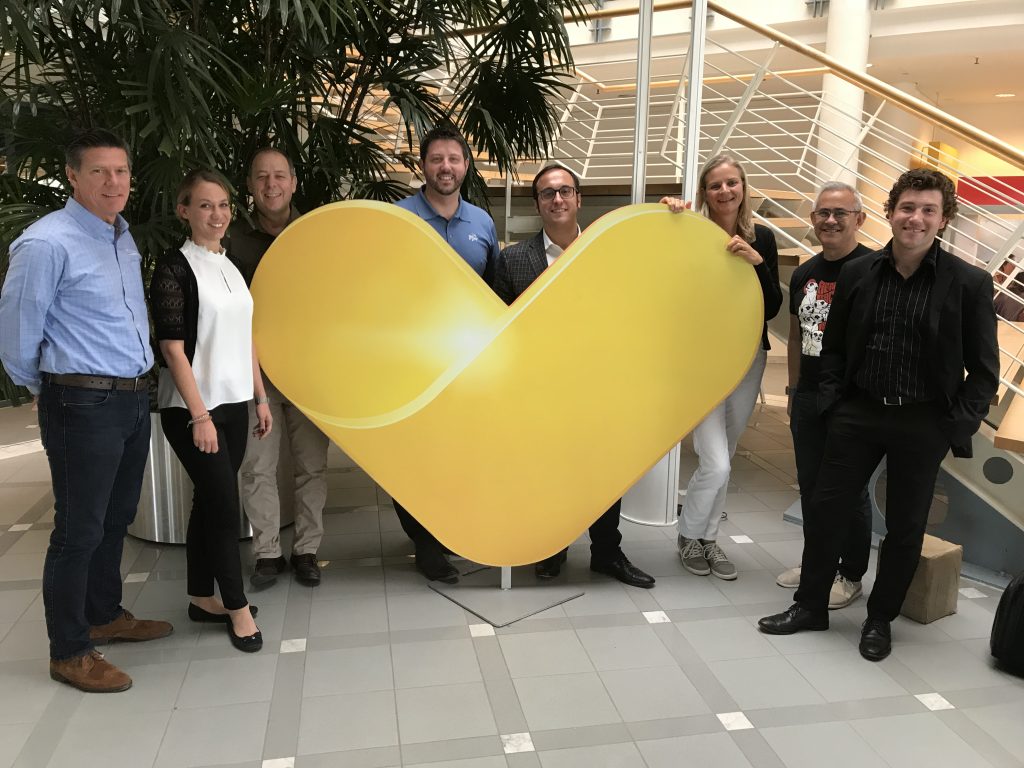 The SDTA hosted a luncheon and invited the members of Japanese Tour Operator Association known as “Agent Kai”. Thirteen San Diego partners and Phil Hannes, Sr. Director of International Marketing joined Riki Suzuki, Tourism Development Manager, in Torrance for this opportunity to network with key Japanese operators based in LA area. The event was well attended with 27 clients and Mr. Suzuki provided updated information about San Diego through a presentation during the luncheon.