Below are the March 2018 sales & marketing highlights from various departments from the San Diego Tourism Authority.

The Happiness is Calling “Summer Feeling” television and digital video program continues to be the foundation of the brand awareness layer.  The national digital video flight will continue through the end of April with Hulu, ABC, CBS, NBC Sports and YouTube Trueview. Spot market television in Seattle, Chicago, New York City, Boston, Minneapolis, Dallas continued through March while television in San Francisco and Sacramento launched in March and will run for six weeks. 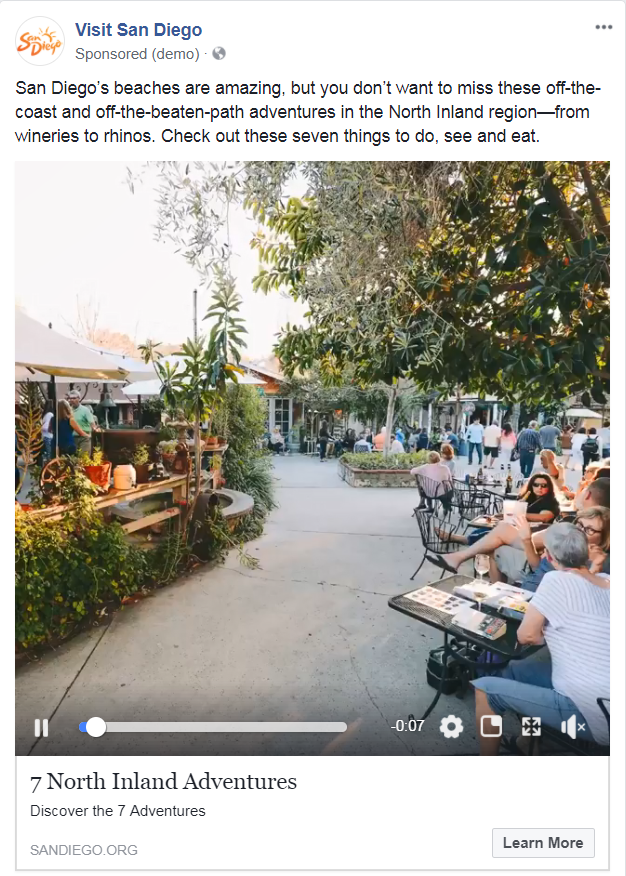 In March, SDTA wrapped up its Canada campaign with national cable television, digital video, display, native, social and search marketing media delivering an estimated 42.5 million impressions and a total of $366,055 spent. 21% of program spending was contributed by Brand USA and affinity partner uplift.

UNITED KINGDOM
In March, digital and out-of-home advertising for the United Kingdom wrapped up with a total $303k spent delivering an estimated 18.5 million impressions. 17% of program spending was contributed by Brand USA and affinity partner uplift.

SDTA’s co-op participation in Visit California’s “All Dreams Welcome” campaign wrapped up in March with a total of 6.2 million estimated impressions and a spend of $17.3k for the Germany market.

SDTA continued planning and execution for the summer 2018 campaigns with Fliggy, Ctrip and Baidu campaign flighted to launch in April. Always-on paid search and organic social campaigns continued throughout the month with an estimated 4.3 million impressions and a total spend of 22k, 4% was contributed as in-kind media value from Brand USA.

SDTA’s co-op with Visit California’s “All Dreams Welcome” campaign wrapped up in March for Germany, Mexico and Canada markets. Delivery across all markets for the month was an estimated 25 million impressions with over $44k in Visit California cooperative spending. 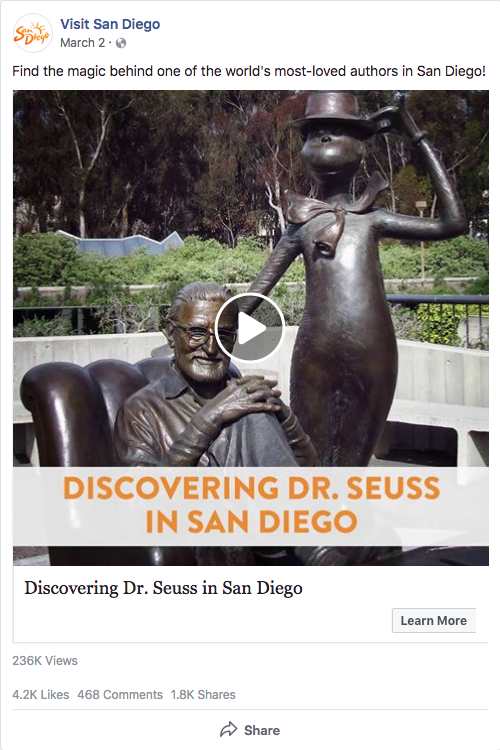 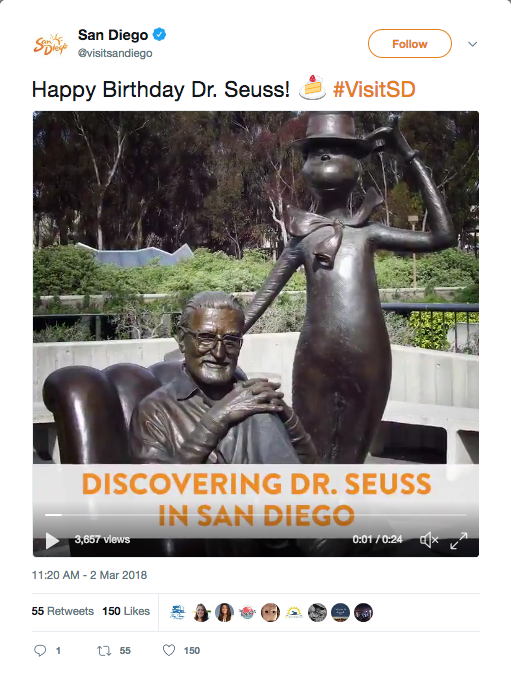 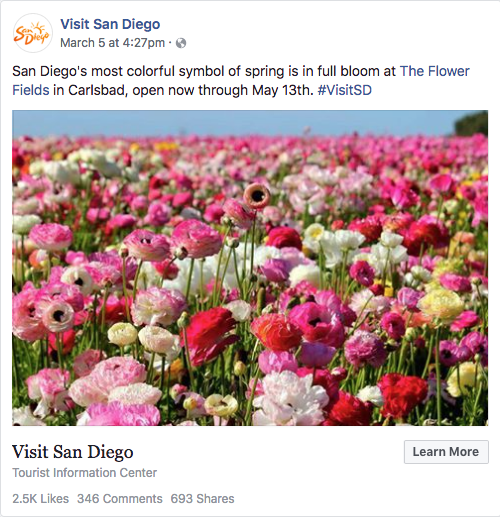 The March B2B Postcard was delivered to 8,568 meeting planners and was the eleventh in a year-long series of video emails. Each month a new video showcases San Diego icons, regions, businesses, or opportunities to inspire meeting and event planners. The open rate for the March B2B video postcard was 21.3%, which represents over 1,797 unique meeting planners. The March video showcased golf courses across the county with a message that “tee time” is a great way to reward attendees. The video featured:

@SDTAConnect Twitter base grew by 1% from last month to 3,646 followers. There were 20 tweets during the month.

This month, the tweet with the most exposure (2,686 impressions) was a story highlighting the SDTA partnership with Ensenada tourism and its bi-national partnership.  This tweet also received the most engagement with 137 interactions. 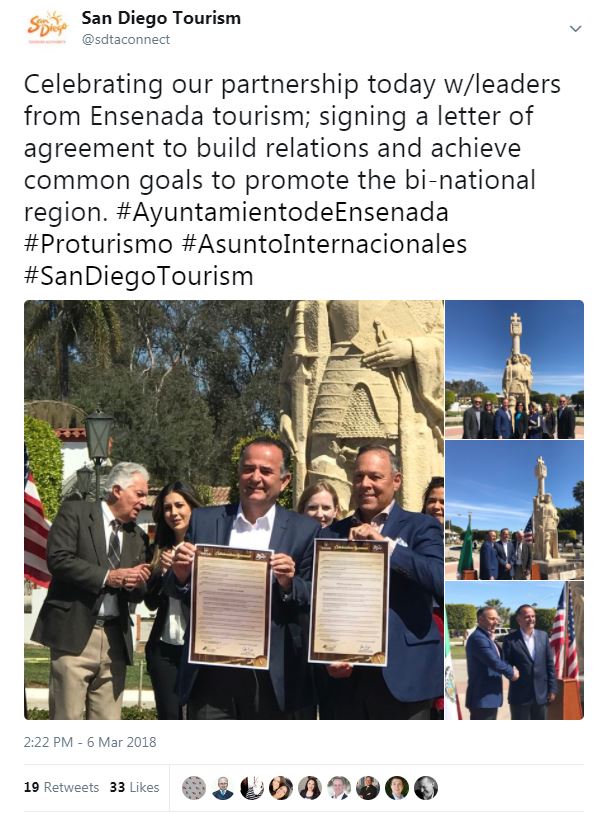 10 Members attended the Open Office Hours on the 23rd to learn how to best maximize benefits. 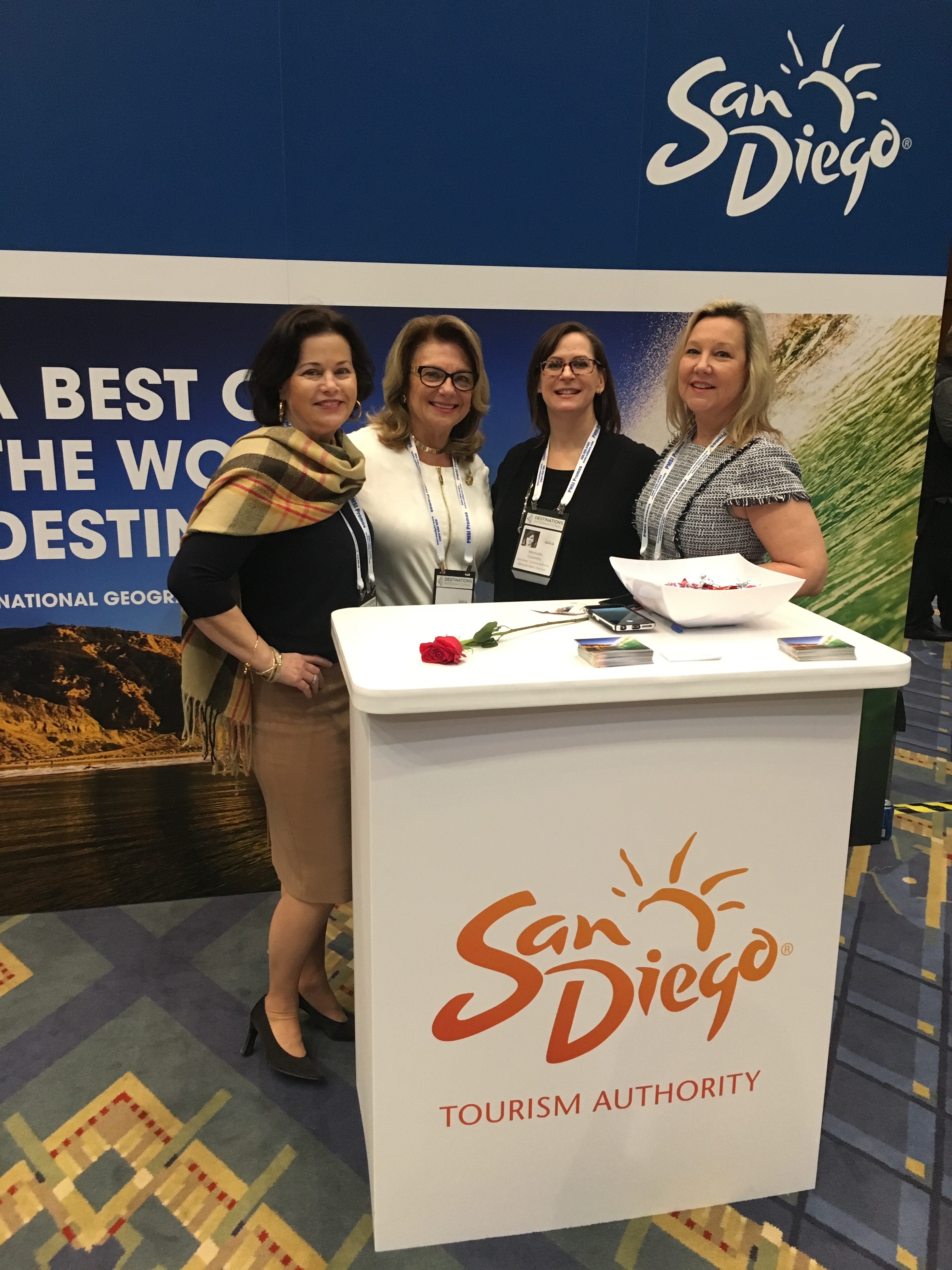 March was an incredibly busy month for our Site Experience team, with 27 client site experiences, creating exposure to 103 hotels and 18 venues.  During the month, our clients experienced some memorable sites.  One, in particular, was a site with the Institute of Navigation.  One of our Mission Bay hotels did such an incredible job with doing their homework, understanding the clients’ needs, and building a trusting relationship, the client was so impressed that she decided to book two years, worth 2,170 room nights combined.

In addition, we conducted a Familiarization trip, March 19-22, bringing 16 clients to San Diego that had never been or has not been to San Diego in the past 5 years.  During the “Fam”, we visited 23 hotels while discussing 11 potential group business opportunities.

San Diego Meeting Certified has graduated two classes of hospitality professionals since the program’s February debut. To date, a total of 54 attendees have “graduated” from the program.  This certification program is designed specifically for all Hotel Sales Managers, Directors of Sales, and General Managers. It provides you with an actionable plan for selling your property, neighborhood, and the destination to improve your hotel conversion rate. There are six remaining classes scheduled in 2018. FOR DETAILS AND TO REGISTER, CLICK HERE.

“The story selling approach was a great way to address the eventual rut that most sales people will find themselves in. I have already seen a difference in my ability to sell my property with more confidence.”

In March, public relations manager Edna Gutierrez joined Visit California on a media mission to Mexico City, which was attended by 66 media and 27 influencers. Also while in Mexico, Gutierrez met individually with seven leading media outlets, including Excelsior, Vogue Mexico, Donde Ir and Fernanda. The Communications team also joined SDTA staff who traveled to Ensenada Baja California for the signing of a letter of agreement with Ensenada tourism leaders to build relations and achieve common goals to promote the bi-national region. 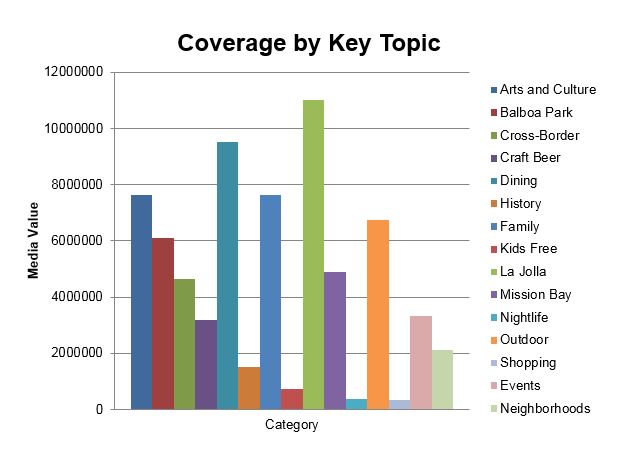 Anita Yu, Travel Trade Representative in Beijing, participated in Club California Product Development Seminar in Shenzhen. 10 key tour operators and wholesalers from Shenzhen and Guangzhou region joined the session where Anita delivered the destination presentation and met with each of them on One-on-one meetings.

SDTA co-organized a training session with Hainan Airline in Beijing to provide the information about the new PEK-TIJ-MEX route to help new product developments utilizing the flight. 25 key tour operators in Beijing attended the event and learned about travel resources in San Diego and how to use Cross Border Xpress to get to San Diego.

Phil Hannes, Sr. Director of International Marketing attended the March 22nd inaugural flight ceremony in the Tijuana Airport to welcome the first Hainan flight from Beijing to Tijuana.  71 of the 152 passengers stayed in Tijuana/San Diego while the others continued service to Mexico City. This flight will have three weekly frequencies. 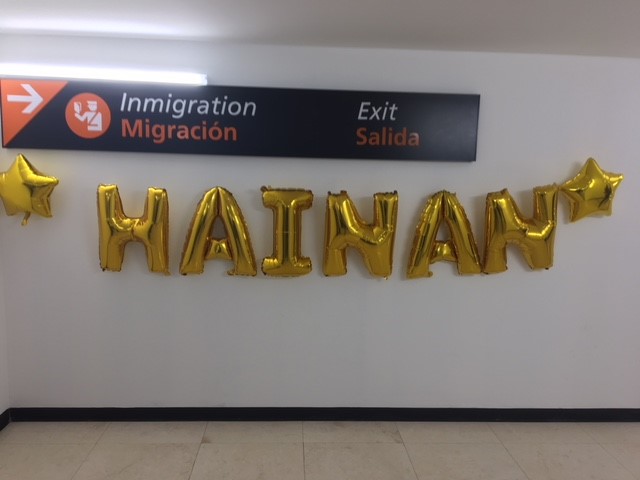 In late March Riki Suzuki, Tourism Development Manager attended the Active America China Summit in Atlanta. Riki Suzuki had 18 one-on-one meetings with tour operators from China to discuss San Diego promotions and update them on what’s new in San Diego including new direct flight via CBX by Hainan Airlines. Also, Mr. Suzuki had opportunities to network with many more accounts during the summit events.

SDTA conducted the first SDTA Japan Sales Mission in Tokyo and Osaka from March 5th to 9th. Riki Suzuki, Tourism Development Manager, and a 5-member organizations participated in the mission. San Diego delegates had opportunities to present and train over 80 travel professionals through:

Also, during the mission, San Diego was featured as the regional showcase partner at a Visit California’s event, Club California Breakfast Seminar. The team had an opportunity to have a presentation to train over 40 frontline retail agents, followed by networking time with them.

Phil Hannes attended the March 10th Inaugural ceremony to promote the COTUCO Tourism Plan for 2018 to promote the Mega-Region. Hannes participated in the ribbon cutting event followed by a San Diego welcome message and consumer trade show at the Tijuana Cultural Center.

In early March, Tourism Development Director, Benjamin Eastman, attended the ITB Tradeshow in Berlin, Germany. San Diego was a hot topic within the Visit California booth as the debutes of the new Lufthansa flight and the return of the Edelweiss flight were imminent. Benjamin had a multitude of meetings with tour operators discussing current and upcoming promotional activity for the region and heard lots of great feedback about German/Swiss room night sales to San Diego.

The staff of Black Diamond, the SDTA UK office representation conducted a training day at Barrhead Travel which is Scotland’s largest independent travel group and one of the largest in the UK.  40 agents were trained as the tour operator is planning to expand its programs with US destinations.

FAMS:  For March 2018 Tourism Development coordinated 4 site experiences including sites for PR Central the new SDTA representative firm in Mexico and Claro Sports Network. Virgin Holidays UK sent 2 product managers to pre-con San Diego before including the destination of San Diego in their FAMTASTIC program, sending 11 agents to San Diego as one of 5 destinations, prior to the entire group meeting up in Las Vegas to share pictures and experiences.  Representatives from Sweden, Mexico and Canada were also in San Diego on sites/visits.