Below are the February 2018 sales & marketing highlights from various departments from the San Diego Tourism Authority.

The Happiness is Calling “Summer Feeling” spot market television and digital video programs, which serve as the primary brand awareness advertising layer, continued in February and will extend through April. Complementing the brand program is a robust layered digital media program including but not limited to the “Always On” content initiative, search marketing, acquisition and conversion-based display campaigns with online travel agency, network and premium travel partners. In total, the domestic leisure advertising program for February delivered an estimated 181 million impressions against $3.1 million in spend. 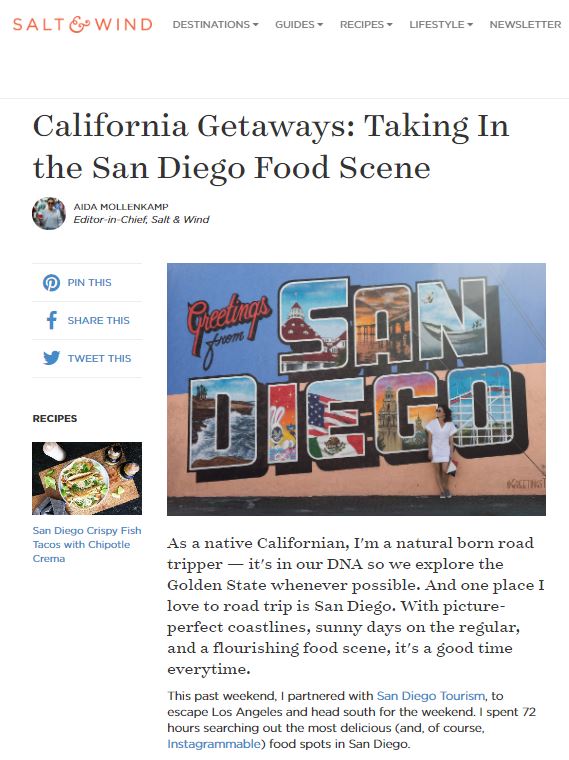 In addition to the video, social, native and influencer media distribution programs which launched in January and continue through June, custom media partnerships with premium partners BuzzFeed and Tastemade launched in February in the Los Angeles and Phoenix markets. Tastemade leveraged their Tastemaker and Destination Spotlight video franchises, and Buzzfeed leveraged their “Bring Me” series and produced a co-branded video for San Diego.

Global OTA Program
In February, in collaboration with Expedia Media Solutions, SDTA launched “Better By The Beach,” a global OTA campaign that drives awareness, inspiration, and consideration while increasing perception of San Diego as more than just a beach destination.

The custom hub was built upon the notion that travel experiences are significantly enhanced when they happen closer to the coast. On the custom “Better By The Beach” hub, users can explore the variety of experiences that San Diego has to offer and browse by region or activity type such as adventure, lifestyle, family fun, flavor and after dark. 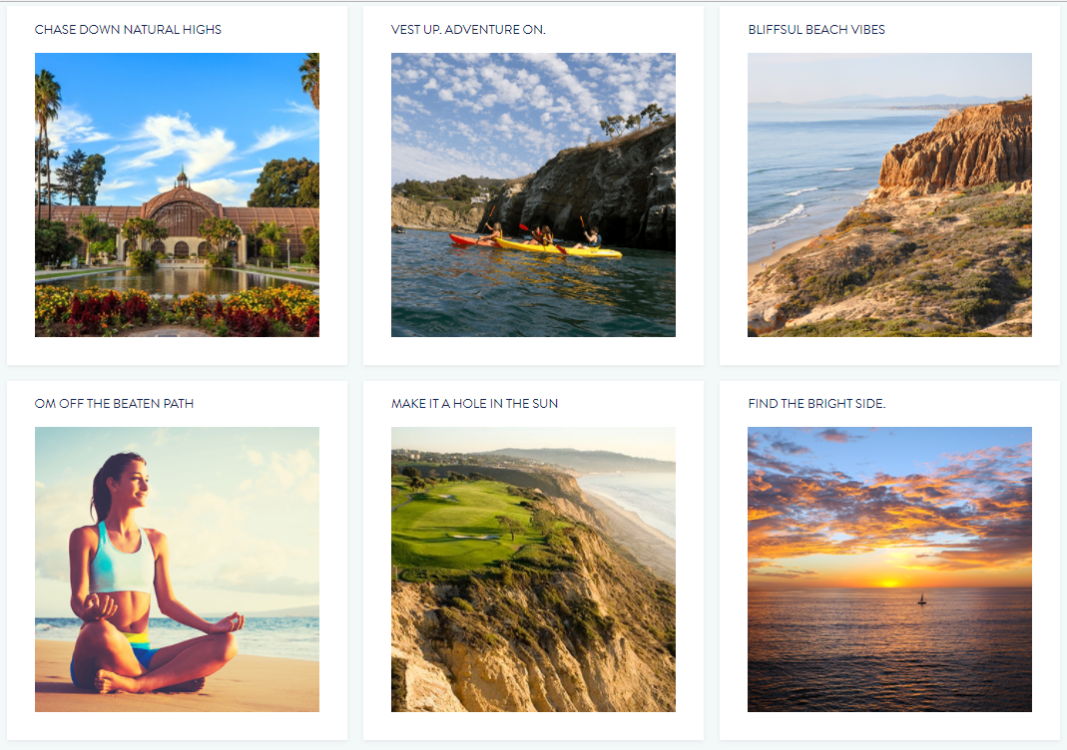 To leverage the power of social media and its role in consumer inspiration, the campaign utilizes a variety of globally-relevant trending hashtags along with a San Diego branded hashtag #BetterByTheBeach to inspire potential travelers to discover more San Diego related content on Instagram, Facebook and Twitter. The $500k campaign will run through May in the United States, Canada, United Kingdom and Germany.

Web traffic for January included 735,271 user sessions between the desktop and SDTA posted a total of 109 Tweets, 33 Facebook posts, and 21 Instagram posts through our social channels, 8 blogs, and distributed 5 consumer emails. 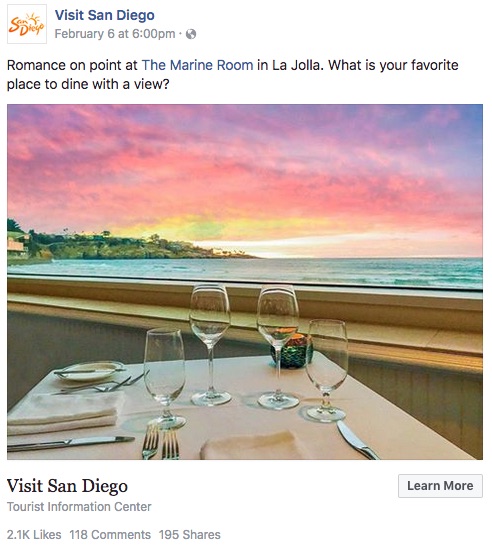 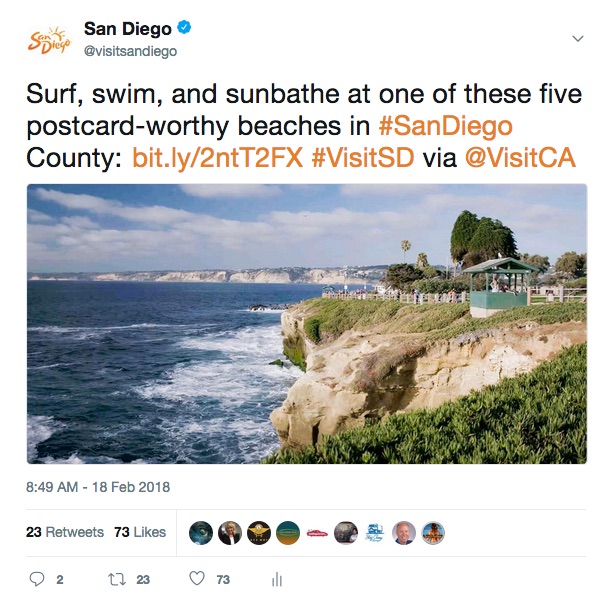 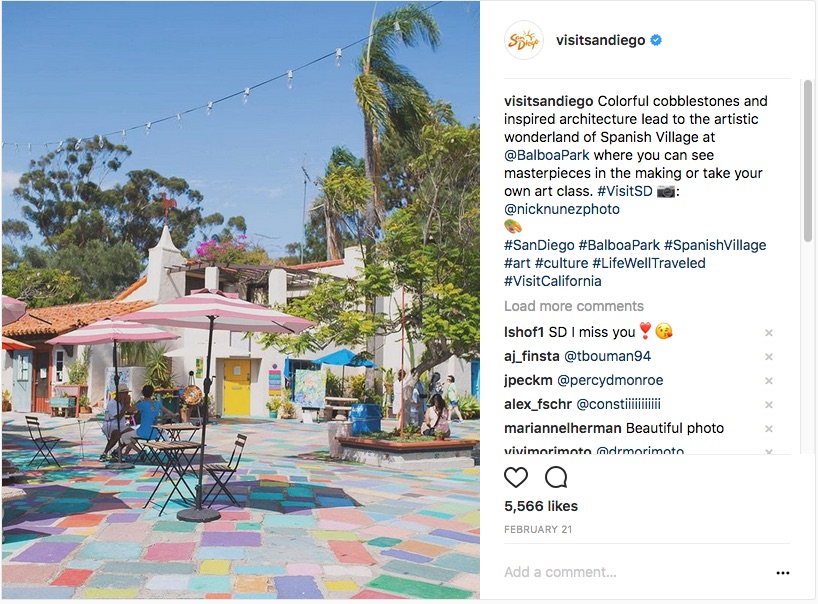 The February B2B Postcard was delivered to 8,289 meeting planners and was the tenth in a year-long series of video emails. Each month a new video showcased San Diego icons, regions, businesses, or opportunities to inspire meeting and event planners. The open rate for the February B2B video postcard was 23.8%, which represents over 1,970 unique meeting planners. The February video showcased teambuilding in the destination. The video featured:

@SDTAConnect Twitter base grew by 1% from last month to 3,626 followers. There were 20 tweets during the month.

This month, the tweet with the most exposure (4,611 impressions) was a story promoting the USS Midway Museum earning a spot on Trip Advisor’s list of most popular tour items for international travelers. 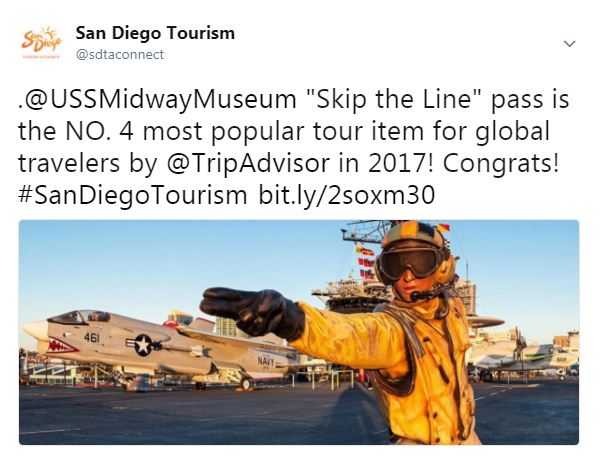 The tweet with the most engagement was the announcement of the Visit California Poppy awards – SDTA team took home the award for Best PR campaign promoting the strength of our bi-national partnership with Tijuana & Mexico’s Baja region. 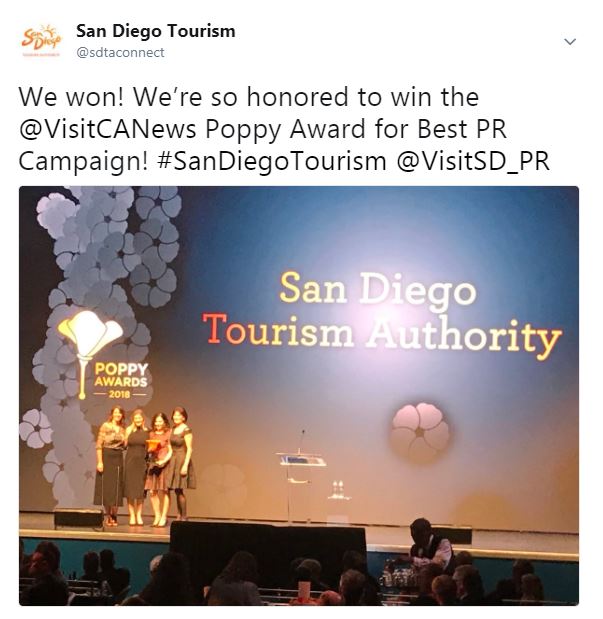 32 Members attended the Open Office Hours on the 28th to learn how to best maximize benefits.

The Hotel Meetings Sales team had another strong month, booking 62 meetings representing 25,768 room nights. This represents 12 more meetings booked compared to February of last year. Fiscal year to date, the Hotel Sales team has booked 299,206 room nights, which is 108% to goal.  These booked business opportunities represent meetings which have never been to San Diego or have not been to San Diego in the past 5 years.

In addition to the positive productivity results, the Sales and Events Teams were active with several tradeshows and events across the country.  On February 13th, Margie Sitton, along with our National Sales Directors from both the Hotel Meetings and Citywide Teams attended Destination Showcase in Washington, D.C.(below). This event lured 650 meeting planners from the DC Metro area to network and discuss business opportunities with our Sales Team. 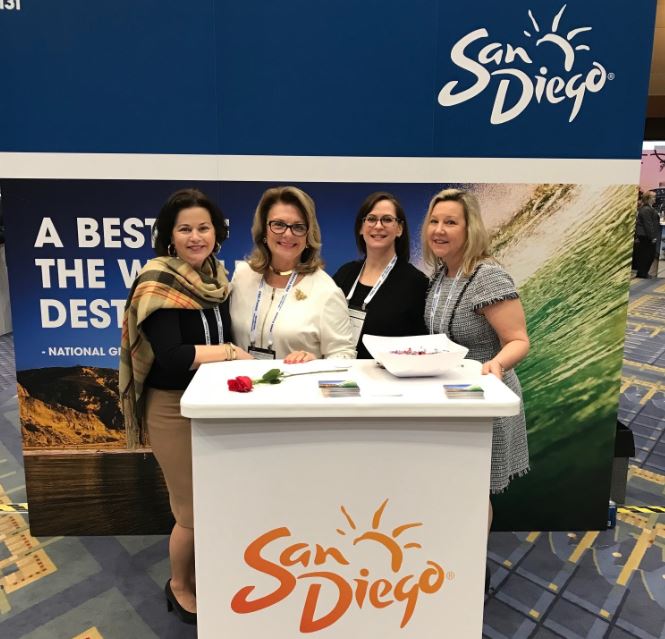 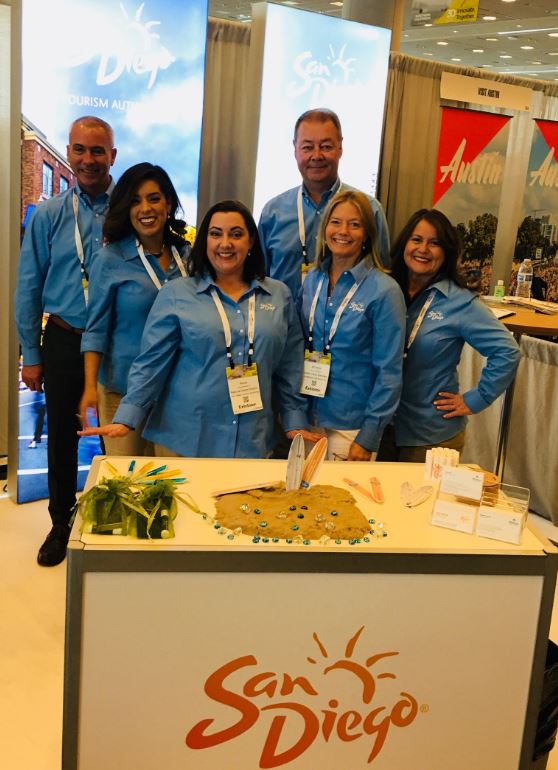 Also in February, Lori Alstrom partnered with Puesto on a “pop up” restaurant opening in New York City.  Lori invited 15 key meeting planners to the one night only event and showcased our Cali-Baja cuisine while discussing group and incentive meetings for San Diego.

February was another busy month for our Site Experience team, with 14 client site experiences, creating exposure to 54 hotels and 11 venues.  One particular hotel stood out during a recent site, with a client expressing interest in Mexican food.  The hotel personalized an authentic Baja taco bar experience, which was memorable and creative, positioning the hotel to be in the final running for an upcoming board decision.

Ted File, Director of Site Experiences, began a new Site Experience 3.0 training program! Six properties, including operation team members that are involved with sites, have completed the training in January and have already experienced recent successes with their sites. A recent comment from a Director of Sales: “the training was very helpful and informative and has invigorated our sales team!”.  If you have not yet reached out to Ted to set a date for training, please send him an email at tfile@sandiego.org.

San Diego Meeting Certified saw its first graduating class in February. This certification program is designed specifically for all Hotel Sales Managers, Directors of Sales, and General Managers. It provides you with an actionable plan for selling your property, neighborhood, and the destination to improve your hotel conversion rate. There will be eight total courses options in 2018. FOR DETAILS AND TO REGISTER, CLICK HERE.

Margie Sitton speaks with a recent graduate of the San Diego Meeting Certified program on the latest episode of Margie’s Minute. Nancy Wagner is director of sales and marketing for Hilton San Diego Misson Valley and she shares her experience on what she learned in the three-day course and why it’s so important for her entire team to become certified.

In February, Communications partnered with Brand USA to host a local media availability highlighting the SDTA’s marketing program of work in China. San Diego-based media were invited to capture the Brand USA shoot and interview Joe Terzi about marketing efforts in China.

The team also partnered with Visit California’s office in India and hosted its new California Dreamer, actor and celebrity influencer Rannvijay Singh Sangha, along with Lonely Planet Travel magazine and the Times of India, a leading media group with a combined circulation of over 24.5 million and readership of almost 74 million, on a content-capturing trip in San Diego. 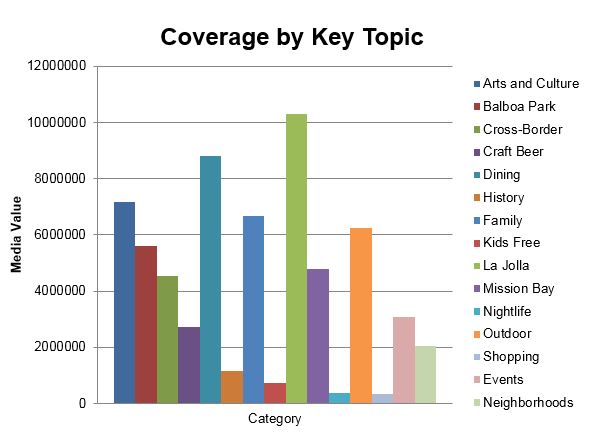 The week of February 12th, Phil also attended the America’s Routes Conference in Quito, Ecuador accompanying the San Diego International Airport team to meet with key airline industry representatives in the development of new flights into our region. 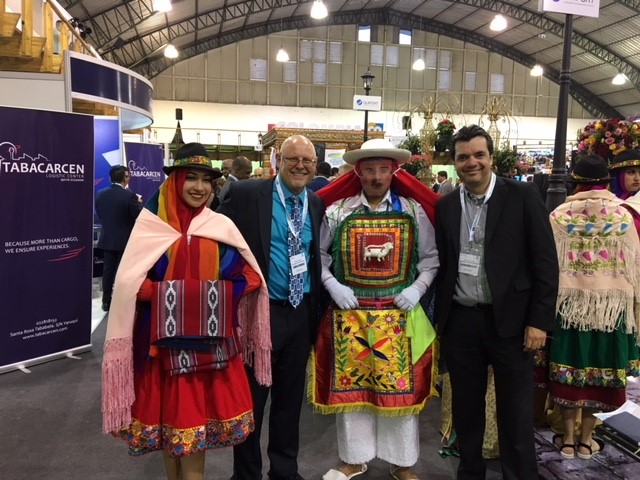 The SDTA Tourism Development team hosted the Annual Asian Client 9-course luncheon in Rosemead on February 21st with nearly 40 top Chinese, Japanese, and Korean attendees. There were 22 SDTA Members who participated and networked with clients and had the opportunity to showcase their products in a trade show format. 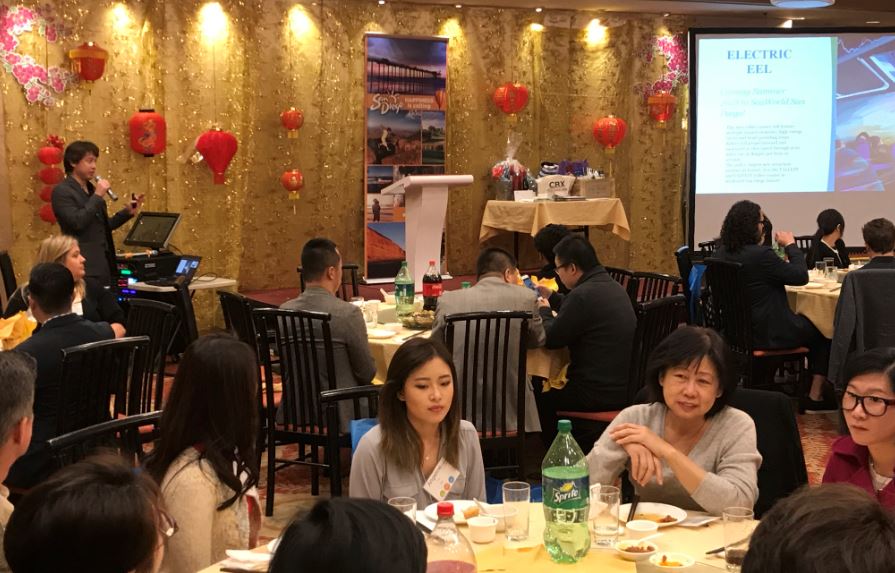 On the same evening, the Tourism Development team hosted the 22nd Annual VIP Client Dinner bringing together 28 top Receptive and Tour Operator partners from the LA region with 16 participating SDTA Members for an evening of networking and introductions.