Below are the November 2017 sales & marketing highlights from various departments from the San Diego Tourism Authority.

The Regional OTA campaign launched in November and will continue through April with Expedia Brands. The $250,000 advertising campaign is expected to deliver 8.6 million impressions to the regional hotel partners. The regional program of work was also supported with Google Pay-per-click advertising.

The digital portion of the consumer direct advertising program in Canada launched in November and will extend through March 31, 2018. SDTA’s media investment for this campaign will be extended by more than $218k in Brand USA and affinity partner uplift for a total digital media buy value just under $806k.

During November, almost $88k in media ran delivering an estimated 5.16 million impressions across the following tactics and partners: digital video with CTV, Global TV and YouTube Trueview; digital display with TripAdvisor, Sojern, and Adara; paid social video and slideshow units with Facebook and Instagram; and search marketing with Google.

CHINA
To increase awareness and interest in travel to San Diego among Chinese FIT travelers and to generate overnight hotel/motel stays for San Diego, SDTA partnered with Brand USA and their digital agency, Hylink, to launch consumer direct advertising programs in China. SDTA’s $1 million investment during FY18 will be extended by at least another $1.5 million in million through co-op with Brand USA, resulting in a paid advertising program that is estimated to deliver more than 250 million impressions.

Key strategies for FY18 include:

SDTA participated in Brand USA’s Single’s Day campaign on Fliggy, which ran October 21 – November 11, 2017. Single’s Day, the equivalent to Black Friday in the U.S., is a nationally recognized day created by Alibaba celebrating e-commerce. It has now become the number one travel campaign in China. San Diego along with 4 other U.S. destinations (Michigan, San Francisco, Las Vegas and Hawaii) participated in Brand USA’s program.

Beyond Secret Journey, San Diego was included in an integrated media campaign on Fliggy’s owned and social channels leading up to Single’s Day. In total, SDTA’s $100k investment in the program was uplifted by an additional $403k in in-kind media by Brand USA. The program delivered more than 112.7 million impressions throughout the campaign window.

During November SDTA also launched a campaign with C-trip, the largest online travel agency in China, to promote Chinese New Year travel to San Diego. Through a partnership with Brand USA, SDTA’s $206,790 media investment for this program was uplifted by an additional $494,805 in Brand USA in-kind media value. While the campaign will extend through February, SDTA spent just over $77k during November, delivering more than 3.4 million impressions. 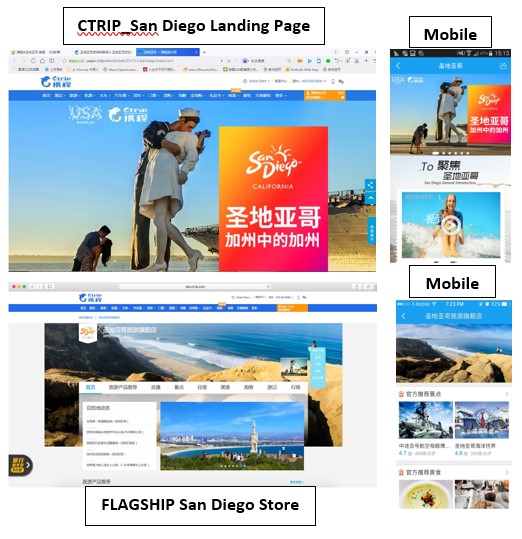 MULTI-MARKET
Through a cooperative partnership with Brand USA, San Diego Tourism Authority (SDTA) invested $105,000 during 2017 to secure an episode in the second series of the Travel Channel UK’s Olly Smith’s Ale Trails. San Diego was one of five participating destinations and the only city in the state of California that participated in the program.

The episode, which was produced earlier this year, aired on the Travel Channel in the UK on November 4 – 20. Airing in the EMEA began November 27th and will continue through December 27th. In addition to the 23-minute episode, SDTA also received a :30-sec broadcast schedule on the Travel Channel, which airs October – December, as well as paid social media promotion via VisitTheUSA’s Facebook and Instagram channels. In total, the program is expected to deliver just under 5 million impressions.

Web traffic for November included 441,709 user sessions between the desktop and mobile websites. The team posted a total of 67 Tweets, 65 Facebook posts (Including Dark Posts), 30 Instagram posts, and 6 blogs, and distributed 7 consumer email. 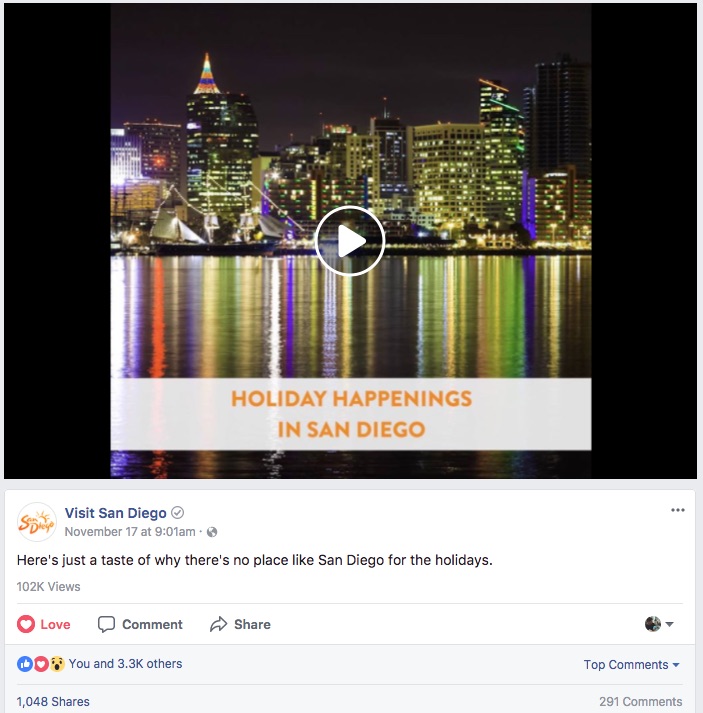 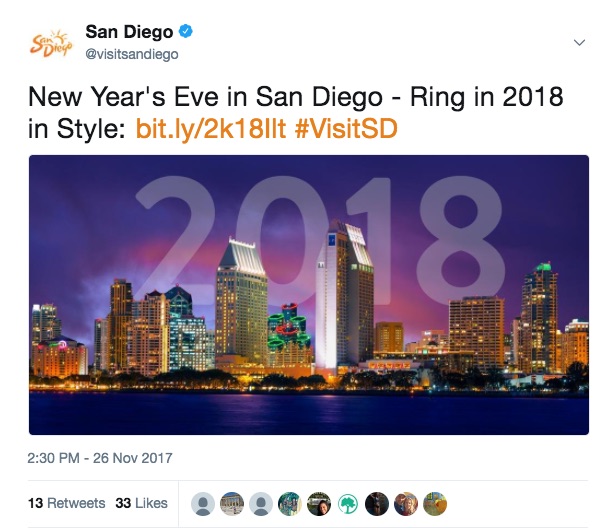 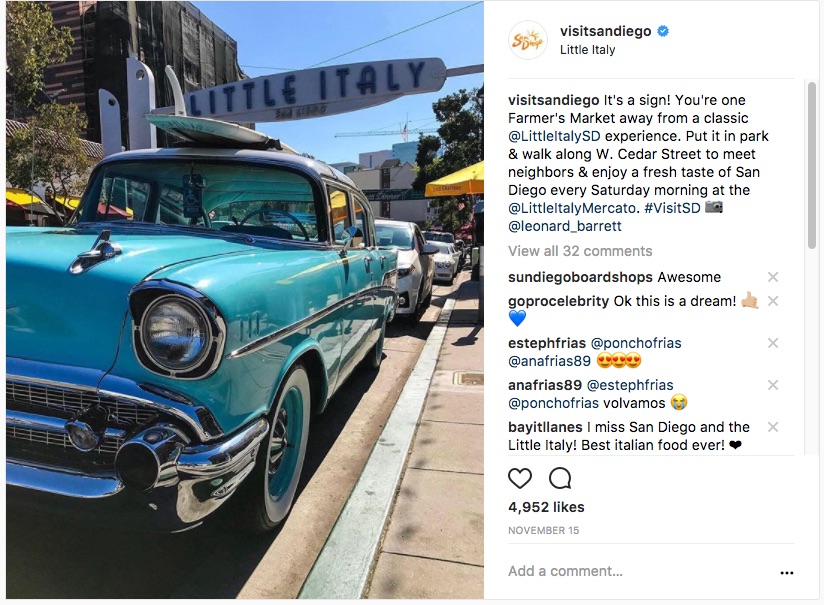 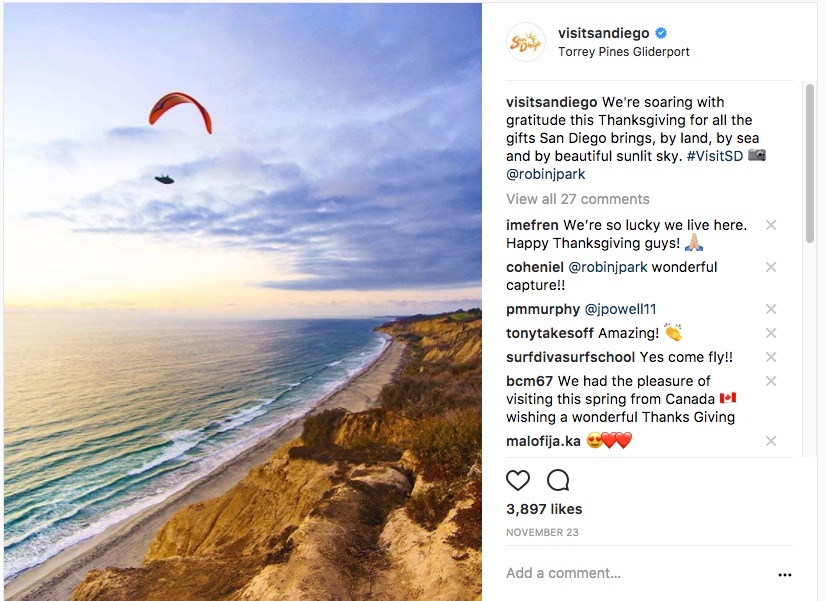 @SDTAConnect Twitter base grew by 1% from last month to 3,545 followers. There were 22 tweets during the month.

This month, the tweet with the most exposure (1,448 impressions) showcased the topping off ceremony and art installation for the new InterContinental Hotel on the Embarcadero. 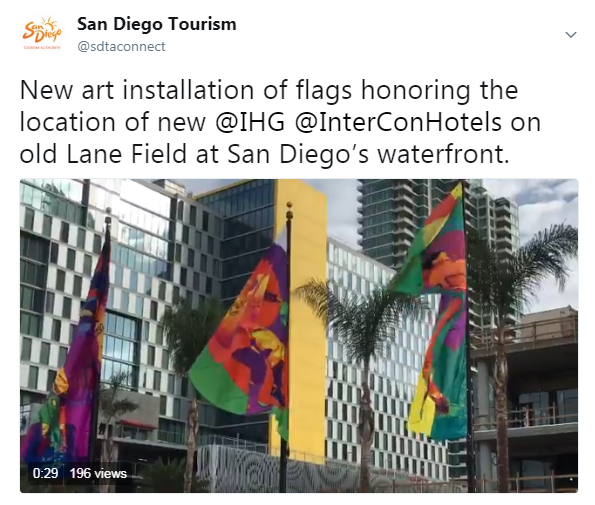 The tweet with the most engagement was a live Periscope video of the new champagne vending machine in action at the Pendry Hotel. 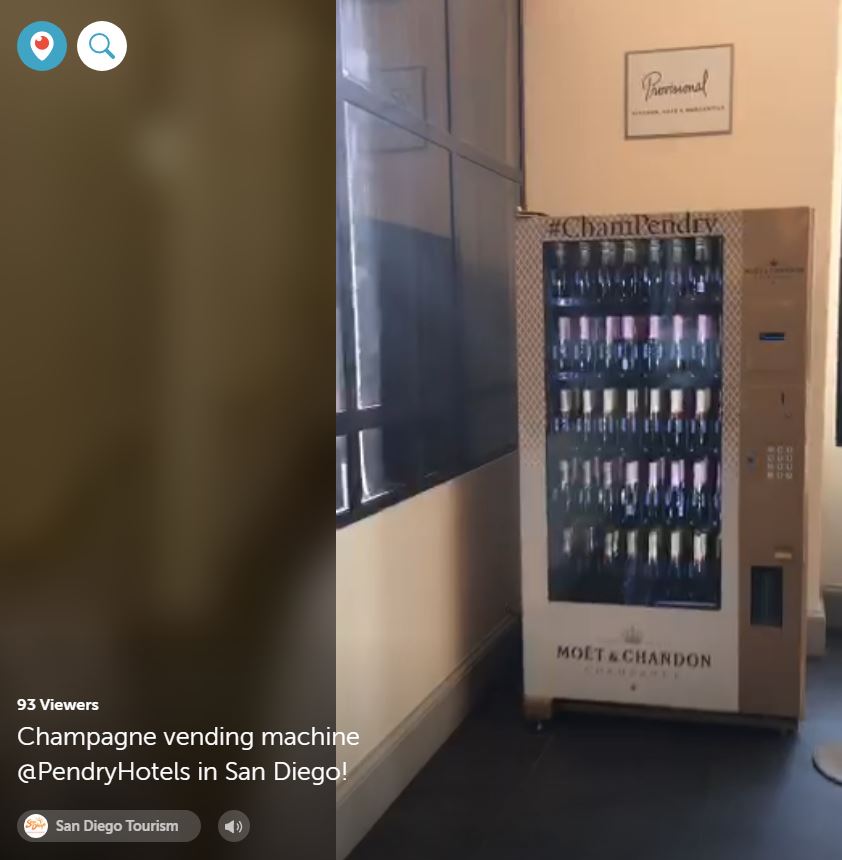 16 Members attended the Open Office Hours on the 28th to learn how to best maximize benefits and utilize the SDTA’s planning and research tools. 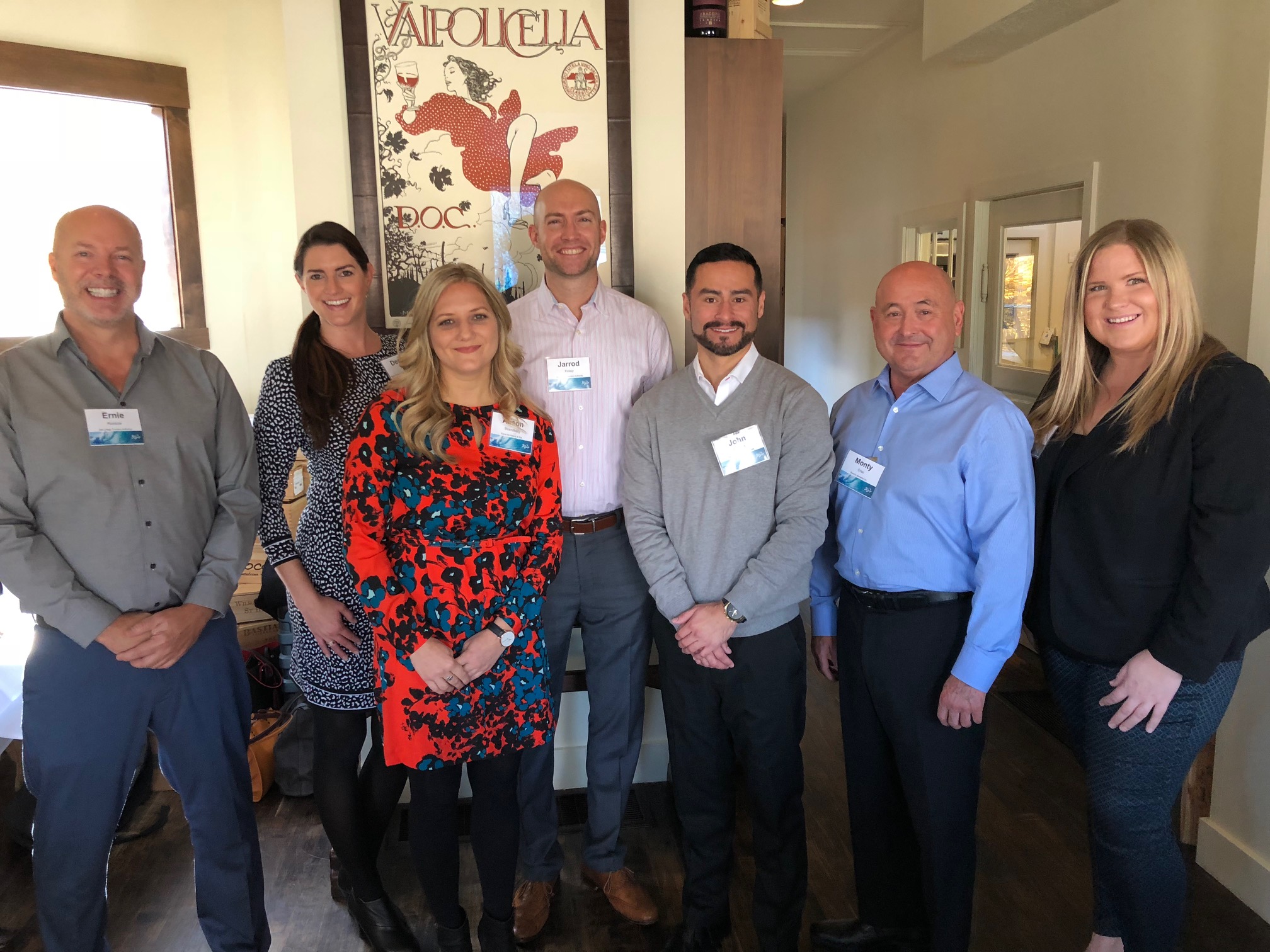 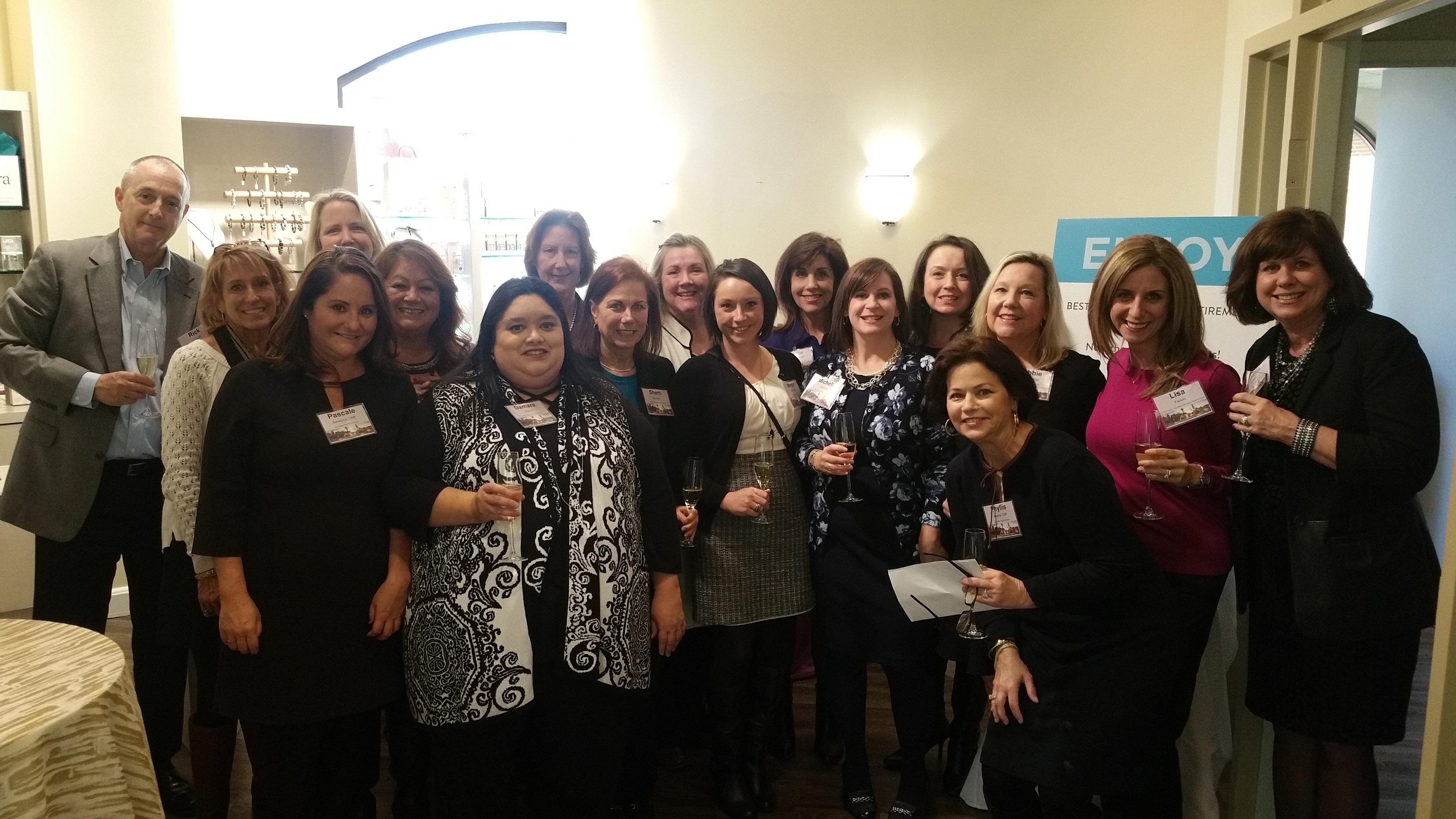 From November 29th through December 2nd, Gillian Ware attended the National Coalition of Black Meeting Planners’ Annual Meeting in Oakland, California. During the same time, Ernie Rossow attended the HPN Global Partners Annual Conference in San Francisco, California where he won the Partner of the Year award for the third time!

In November, Communications staff traveled to Seattle to participate in Visit California’s Media Boot Camp with leading media outlets and social media influencers from the Pacific Northwest region. Director of Communications Candice Eley also traveled to Memphis to speak on a panel of the Americans for the Arts National Arts Marketing Project Conference and share the SDTA’s #FindArtShareArt campaign results. 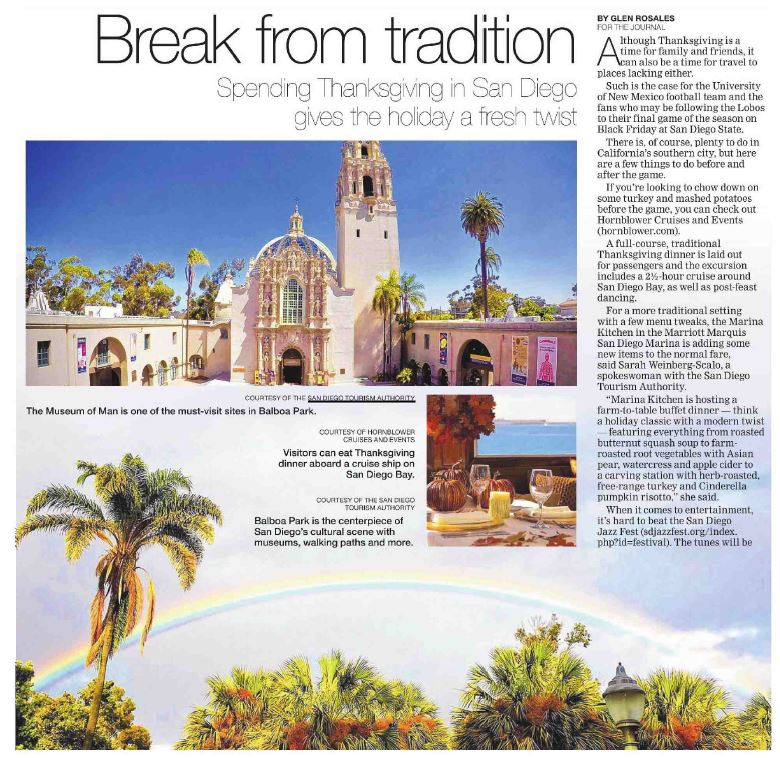 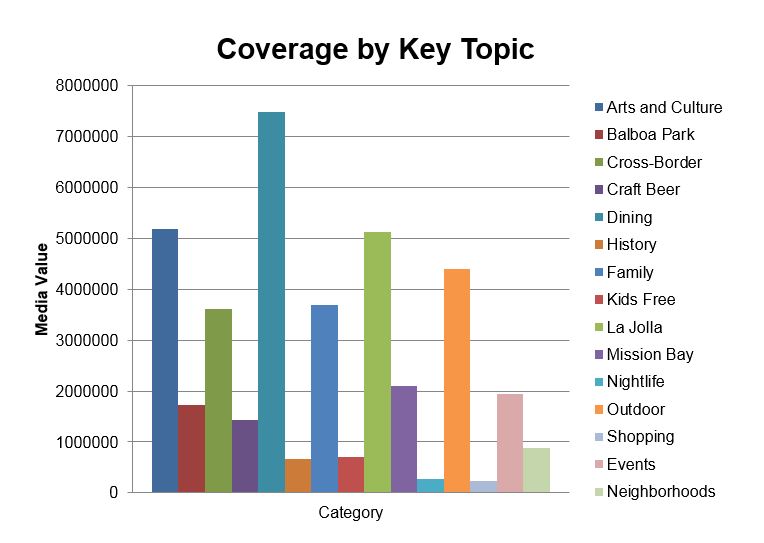 In early November, Benjamin Eastman, Director of Travel Trade, attended the World Travel Market tradeshow in London. Over the course of the 3-day trade show, Benjamin met 1-on-1 with 35 key European trade & media partners to further San Diego’s exposure in their markets and to discuss promotional opportunities.  After the tradeshow, Benjamin traveled to the cities of Chester & Cheshire in order to do training with 3 UK-based luxury travel agencies & tour operators.

We then hosted a FAM group of eight Luxury – Virtuoso travel agents from Mexico supported by Alaska Airlines and showcased many of the San Diego activities from attractions, restaurants, museums and dinner cruises.

Anita Yu, Travel Trade Representative in Beijing, participated in Club California Product Development Series Beijing on November 10th. Nine key tour operators, wholesalers, and OTAs joined the session where Anita delivered the destination presentation and met with each of them on one-on-one meetings. 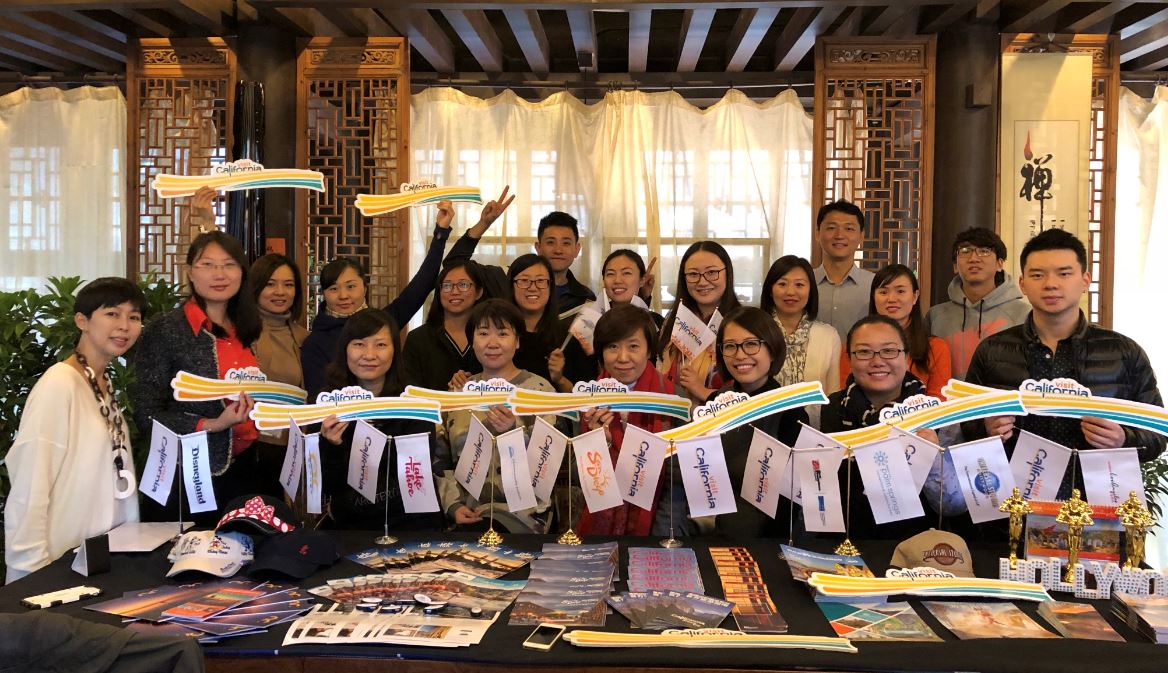 On November 24th, Tomoe Matsunaga, Travel Trade Representative in Tokyo participated in Club California Osaka event. The event welcomed 54 travel professionals in the region. Tomoe had an opportunity to give a presentation to the guests followed by a networking reception.

Yokohama City organized a consumer event in Yokohama on November 26th to celebrate the 60th anniversary of Yokohama’s sister city relationship with San Diego. SDTA Japan connected Yokohama City with Ms. Kumiko Takeda, SDTA’s Japanese Ambassador of Tourism and Friendship and Ms. Takeda appeared on a talk show to introduce San Diego and her life in San Diego. Approximately 200-300 people stopped by to see Ms. Takeda’s appearance on the talk show. SDTA Japan also had a promotional booth to provide information of San Diego at the event. 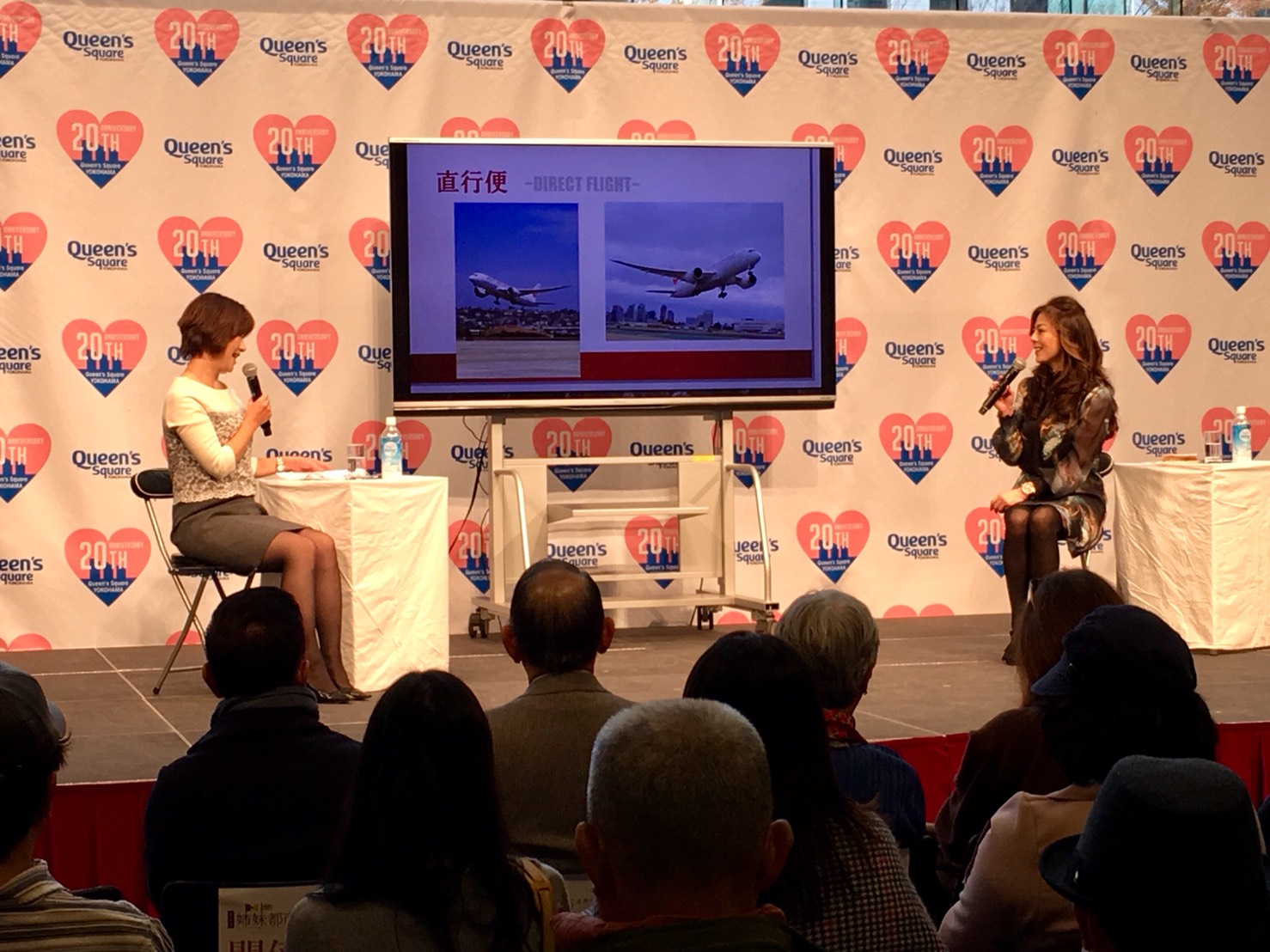 Phil Hannes and Riki Suzuki attended the Excite Holidays official USA launch event in West Hollywood.  In attendance were the Executive Directors, Global Head of Marketing, General Manager of Global Sales and other Excite Holidays staff to promote their new online wholesale program for the travel trade including their Southern California managers. 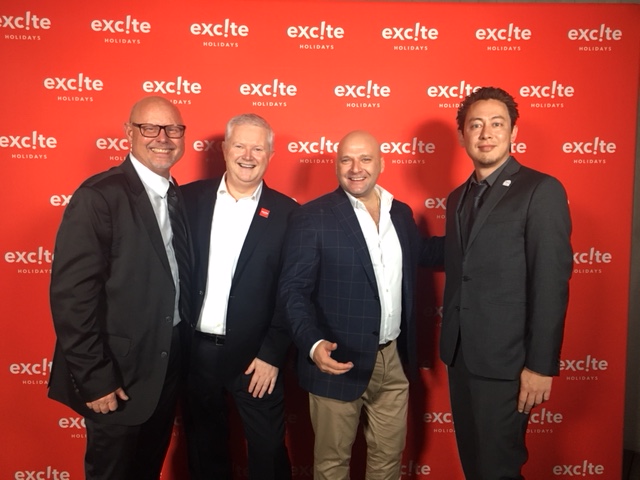 Phil Hannes, Sr. Director International Marketing and a representative from the U.S. Commercial Service hosted a group from Morocco organized by the San Diego Diplomacy Council where he provided an overview of San Diego culture and tourism best practices.