Below are the July 2017 sales & marketing highlights from various departments from the San Diego Tourism Authority. 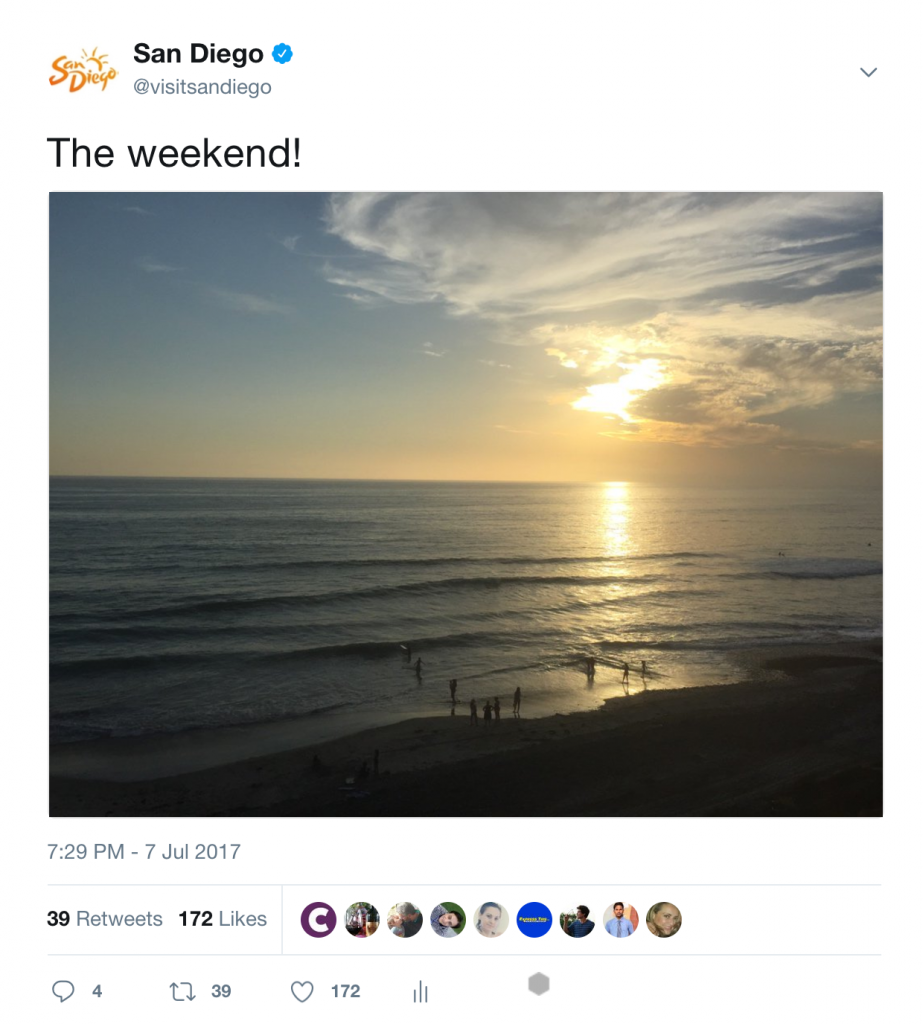 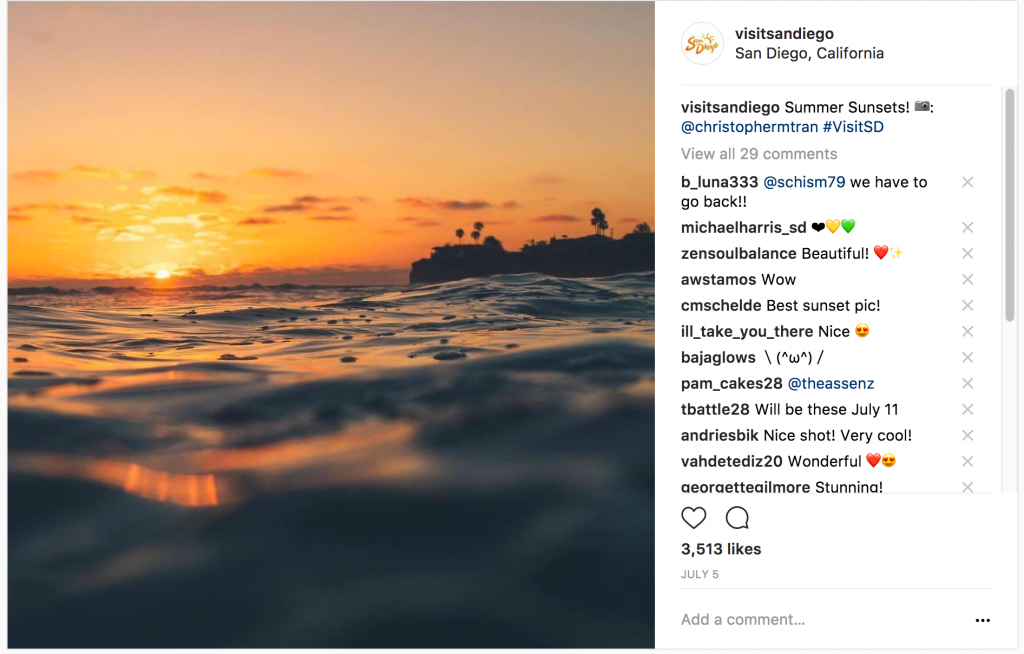 Web traffic for July included 654,443 user sessions and we posted a total of 74 Tweets, 84 Facebook posts (including ‘Dark’ advertising posts) and 19 Instagram posts through our social channels, 4 blogs, and distributed 7 consumer emails. 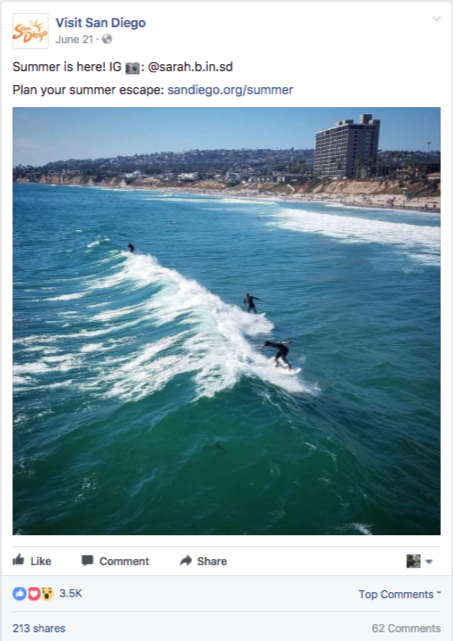 The July B2B Postcard was delivered to 6,319 meeting planners and was the fourth in a year-long series of video emails. Each month a new video will showcase a group of venues for potential meeting and event planners to consider. The open rate for the July B2B Video Postcard was 21.74%, which represents over 1,355 unique meeting planners. The July video showcased unique performing arts venues ideal for keynote speeches, presentations, and after-hours entertainment, and featured:

@SDTAConnect Twitter base grew by 2% from last month to 3,393 followers. There were 54 tweets during the month.

This month, the tweet with the most exposure (6,475 impressions) and engagement (142) was a congratulatory message about Balboa Park being named one of 14 California Cultural Districts in a new creative statewide program. 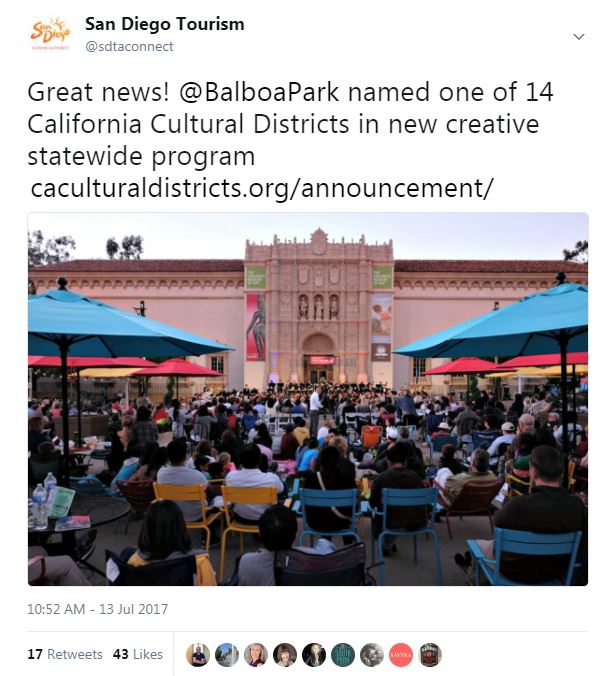 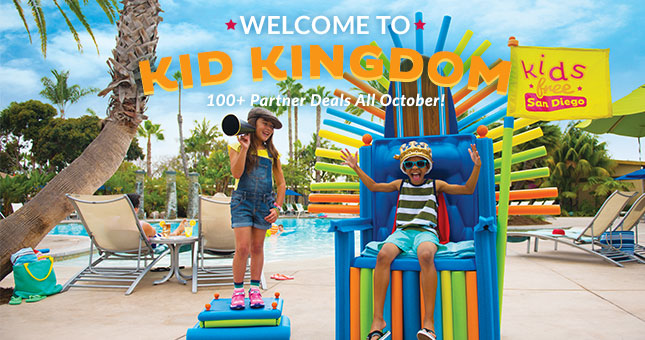 The Kids Free San Diego campaign launched at the end of July. Now in its sixth year, the destination-wide promotion brings together more than 100 SDTA member partners across hotels, attractions, museums, activities, and restaurants to inspire travel to San Diego during October. The $1.2 million campaign will run through late September; delivering an estimated 57.7 million impressions throughout California, Arizona, and Nevada. Highlights include:

28 Members attended the Open Office Hours on the 28th to learn how to best maximize benefits.

From July 11th through July 14th, Margie Sitton, Jarrod Finley, and Maranda Tippin attended the DMAI Annual Convention in Montreal, Canada. We were thrilled to celebrate Maranda as one of the winners for “30 Under 30.” This award is given to outstanding individuals who have shown a significant impact in the industry and are under 30 years of age.

From July 16th through July 18th, Michael Steffen attended the Indiana Society of Association Executives (ISAE) in Muncie, Indiana. Michael met with 42 customers made up of Association and Association Management Companies, and Fraternal and Service Groups. He received one lead for 250 room nights, with more to come.

On July 20th, Jennifer Hicks attended EMCVenues’ MEET USA Educational Event and Tradeshow in Atlanta, Georgia. EMCVenues is a third party with whom Jennifer works with frequently. She met with 46 customers and received one lead for 700 room nights for the destination, with more to come.

In July, the SDTA Communications department collaborated with the Membership team and Bay City Brewing Company to release 72 & Hoppy, a signature San Diego beer. The launch event was covered by local, national and international media. 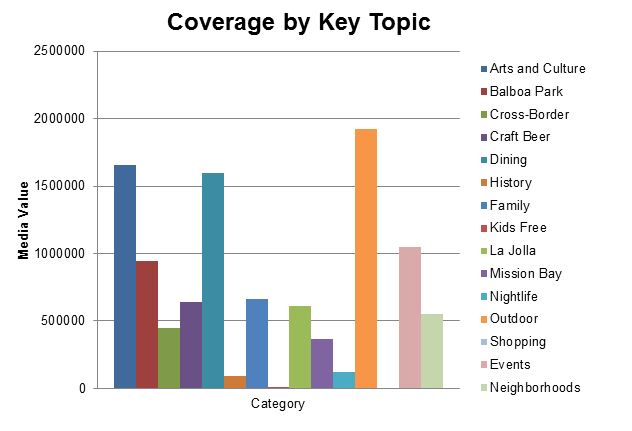 Travel Trade Director, Benjamin Eastman, participated in the Visit California UK Sales Mission to London, Manchester & Dublin. The week was packed with training and networking options with Product Managers and Travel Agents in each of the 3 cities as well as events highlighting California Beer Culture and California Innovation. In total, Benjamin met with several hundred UK clients and was able to continue to highlight the diversity of culture, cuisine, and activities in the region. 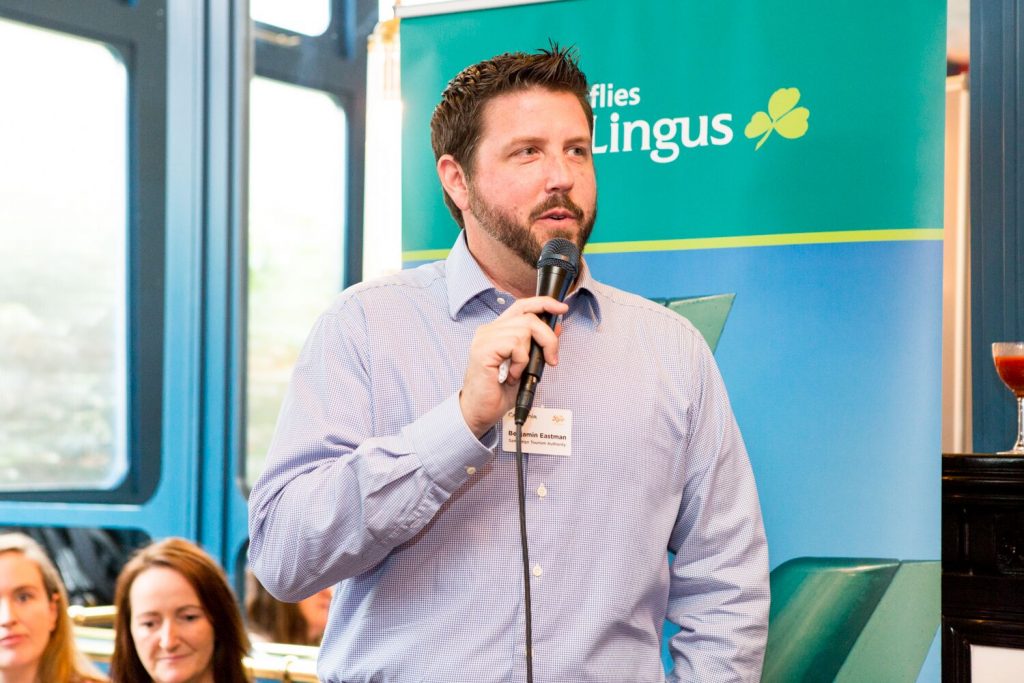