Below are the May 2017 Sales & Marketing Highlights from various departments from the San Diego Tourism Authority. 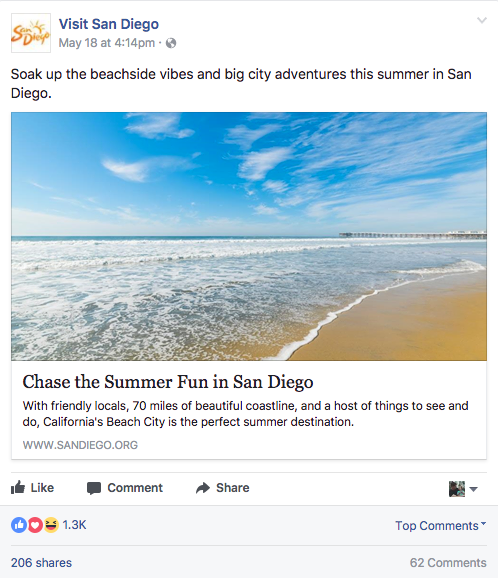 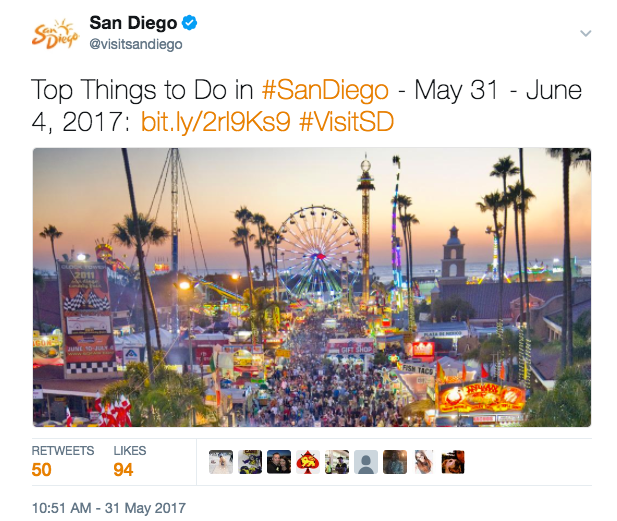 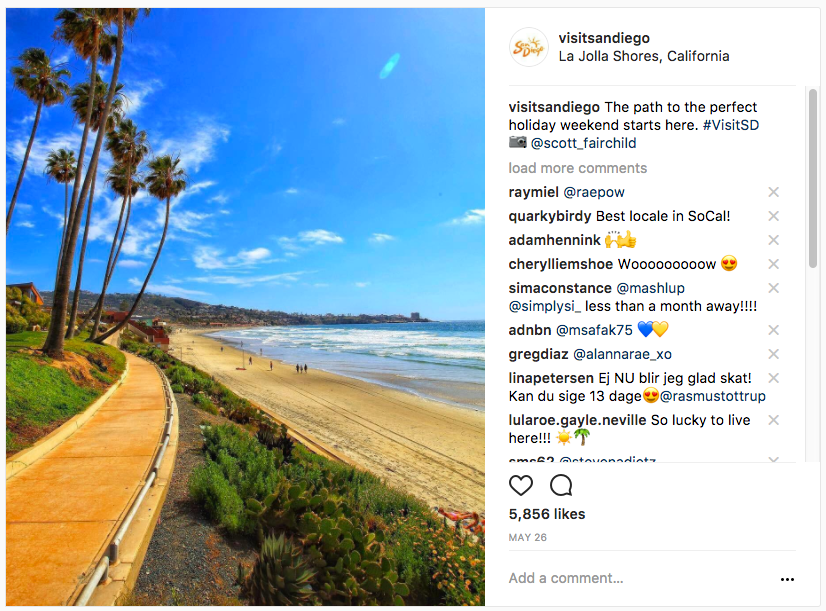 Web traffic for May included 577,874 user sessions and we posted a total of 169 Tweets, 129 Facebook posts (including ‘Dark’ advertising posts), 4 Google+ Posts (Based on trends and usage, Google+ will no longer be part of SDTA’s social media efforts and recording efforts will cease) and 23 Instagram posts through our social channels, 5 blogs, and distributed 9 consumer emails.

Total domestic Google PPC for May totaled $21,725.34 generating 2.0 million impressions and 27,089 clicks for an average click-through rate of 1.3%.  SDTA did not run International Google PPC in April.

In May we ran Google PPC specifically directing traffic to the Luxury and Value pages for regional sales and marketing. Total spending in May dedicated to these regions was $7,963.24 generating 496,725 impressions and 4,467 clicks for an average click through rate of .9%.

EMAIL:  The May B2B Postcard was delivered to approximately 6,200 meeting planners and was the second in a year-long series of video emails. Each month a new video will showcase a group of venues for potential meeting and event planners to consider. The open rate for the May B2B Video Postcard was 22%, which represents over 1,300 meeting planners. This was the second highest open rate in over two years. The May video showcased unique beer venues and included all brewery members, and featured:

Nine unique posts during May included: 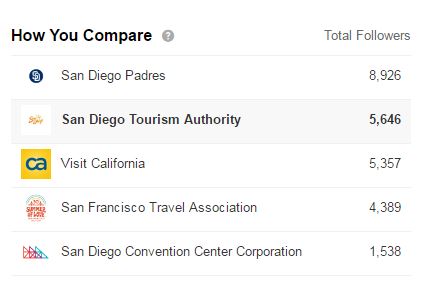 @SDTAConnect Twitter base grew by 2% from last month to 3,283 followers. There were 109 tweets during the month.

This month, the tweet with the most exposure (2,007 impressions) was a promotion of National Travel and Tourism Week – and an infographic with travel/tourism numbers in San Diego. 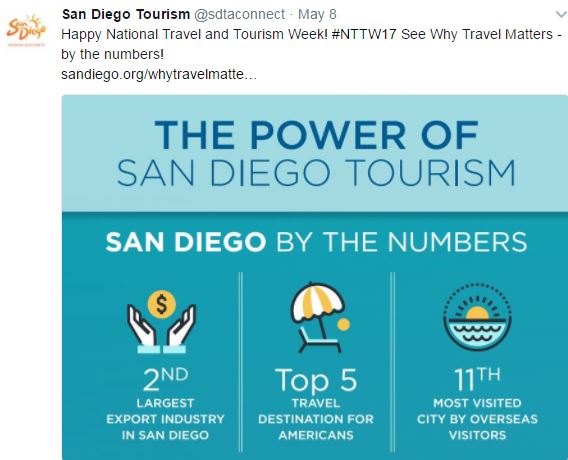 The tweet with the most engagement thanked Mayor Kevin Faulconer for speaking at our annual meeting. 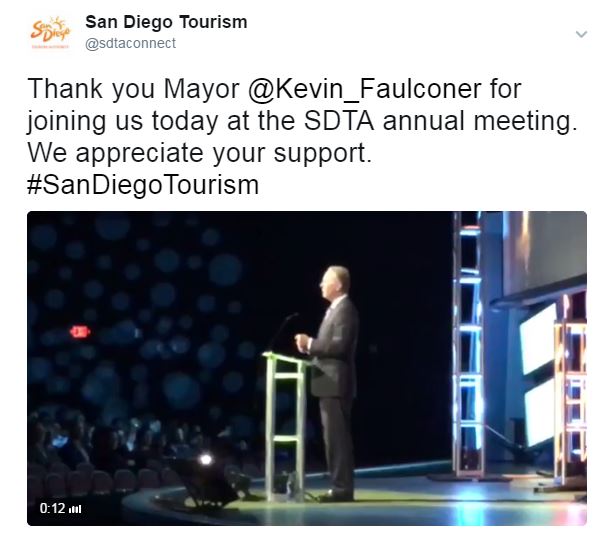 During May, as a continuation of the “Awesome All Year” campaign, spectacular out of home units were placed in Los Angeles, promoting upcoming major events. The high impact units included a hand-painted wall in Venice Beach and a barricade and wall package in Hollywood on Sunset Blvd.

8 New Members joined in May bringing in $12,250 in annual dues revenue. That included a pre-opening Membership for the new Intercontinental San Diego hotel.

30 Members attended the Open Office Hours on the May 19 to learn how to best maximize benefits.

The San Diego Brewer’s Guild board of directors approved a new joint membership plan which would create a bundled membership for SDBG breweries to become SDTA Members. The new plan will be effective July 1, 2017 bringing in nearly 100 new brewery Members and doubling the SDTA’s dues revenue in the brewery category.

The beer will be available in select bars and restaurants, as well as Bay City’s tasting room, beginning mid-June.

The 2017 SDTA Annual Meeting was held on May 10th at SeaWorld. Over 700 Members and stakeholders were in attendance. Mayor Faulconer, Chairman Ted Molter and COO Kerri Kapich addressed the state of the industry and future sales and marketing plans.

WATCH THE PREMIERE EPISODE BELOW

The Hotel Sales Team started the month off strong with the Midwest Roadshow in Minneapolis and Indianapolis from May 1st through May 4th. Andrea O’Hara, National Sales Director, along with five hotel partners began in Savage, MN hosting Altour Meetings & Incentives. SDTA hosted a successful collaboration with Northstar Meetings Group where attendees met for lunch and a presentation on San Diego and engaged in a pizza and dessert making activity. After lunch, the group made their way to Bloomington, MN to host a happy hour for HelmsBriscoe. The team traveled to Indianapolis to meet Michael Steffen, National Sales Manager to host M&I Worldwide for lunch and presentation, then hosted local clients to a happy hour also in Indianapolis. The team finished strong with another successful collaboration with Northstar Meetings Group for lunch and presentation while learning to make gnocchi. Over the four days, they met with close to 60 customers. Together Andrea and Michael received eight leads totaling 10,340 room nights for the destination.

Jennifer Hicks, National Sales Director attended the annual Retreats Resources Roadshow in Greenville, Atlanta, and Birmingham and met with 100 customers during four events. She received one lead for 1,296 room nights during the Roadshow.

The newest sales team member, Chirine Arbadji along with four hotel partners conducted several sales calls in the Dallas area and hosted GlobauxSource for lunch on May 23rd. The next day, we had our last successful collaboration for the year with Northstar Meetings Group for lunch and presentation in Plano, TX while learning to make “Beer-amisu” featuring Belching Beaver’s Milk Stout. Chirine received six leads for 4,923 room nights.

International Communications staff organized a Cali-Baja-themed media tour with top-tier publications from the United Kingdom including British Airways Highlife, Woman Magazine, and About Time magazine, and also hosted travel media outlets from Australia and Germany, Canada and Mexico. The staff also participated in Visit California’s “All Dreams are Welcome” mission held at the Tijuana International Airport and the Cross Border Xpress, providing 50 press kits to media from Canada and Mexico.

Communications coordinated the production of a series of promotional videos to be featured onboard 61 planes from the Mexican airline Interjet during July and August 2017. The videos will be seen by over 1 million travelers as part of an agreement with Cross Border Xpress. 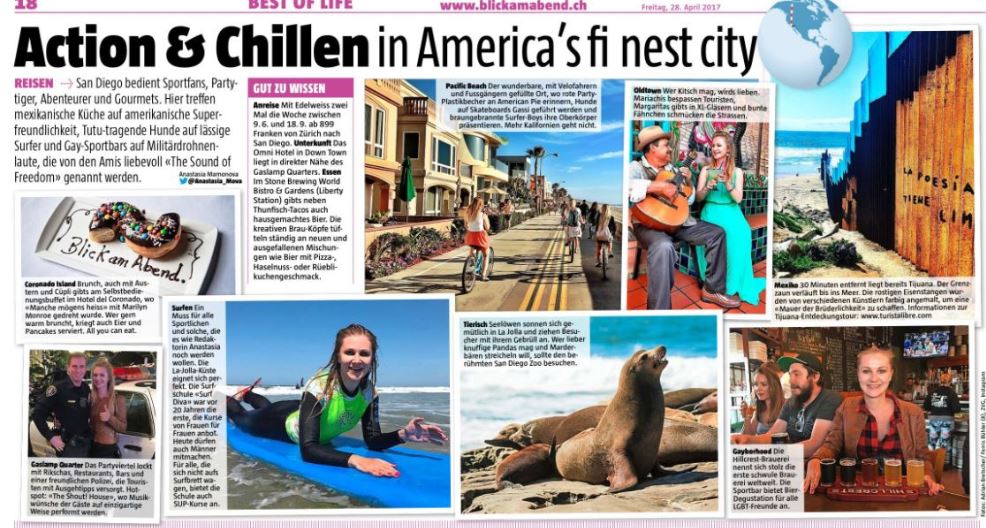 The San Diego Tourism Authority, San Diego County Regional Airport Authority, and Visit California hosted a special event to promote the new non-stop service on Edelweiss Airlines. Direct service from Zurich begins on June 9, 2017. The special event, “One Night in San Diego,” took place on May 5th at the dramatic AURA venue in Zurich, Switzerland. This exclusive event hosted more than 300 travel trade industry partners and media outlets, as well as nearly 200 consumers, and was a chance for guests to discover San Diego.

In early May, Riki Suzuki, Travel Trade Development Manager participated in the California Cup in Los Angeles/West Hollywood. He was able to network with over 40 international clients from all of San Diego’s major markets during the course of the 3-day event.

Cherrie Yang, Travel Trade Representative in Shanghai, hosted a virtual travel and tourism presentation during the Discover America Committee’s event in Taiwan. She introduced highlights of San Diego to nearly 60 attendees including tour operators, airlines representatives, and media members through the virtual presentation. The presentation was later posted on Discover America Taiwan’s website and shared with the rest of its committee members in Taiwan.

Tomoe Matsunaga, Travel Trade Representative in Tokyo, participated in the Club California Fukuoka event on May 19th. The event welcomed 26 travel trade professionals from the region, where Tomoe gave a presentation to promote San Diego and network with the attendees.

Tomoe also joined Brand USA Workshops in Nagoya and Osaka.  In each city, Tomoe had opportunities to meet one-on-one with 12 tour operators to discuss the development of San Diego tours and educate them.

Tomoe participated in the “KIX Tabihaku”, the 2nd largest trade/consumer show in Japan.  Located in Osaka, the show welcomed over 42,000 attendees over 2 days where Tomoe promoted the destination in the San Diego booth.  Tomoe also hosted a San Diego seminar at the show for over 100 consumers.

Cherrie Yang, Travel Trade Representative in Shanghai, participated in the Club California Product Development Series in Shanghai. She had an opportunity to give a destination presentation to educate and update top accounts in Shanghai.