Below are the April 2017 Sales & Marketing Highlights from various departments from the San Diego Tourism Authority. 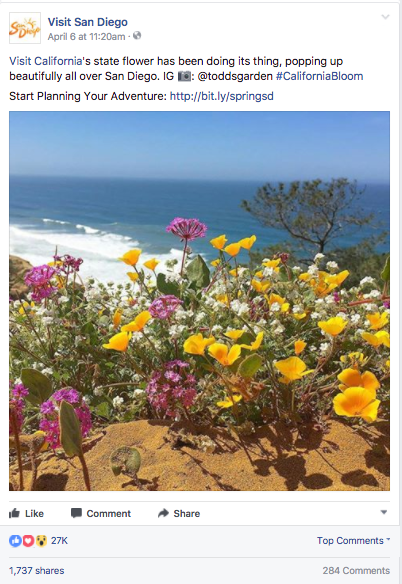 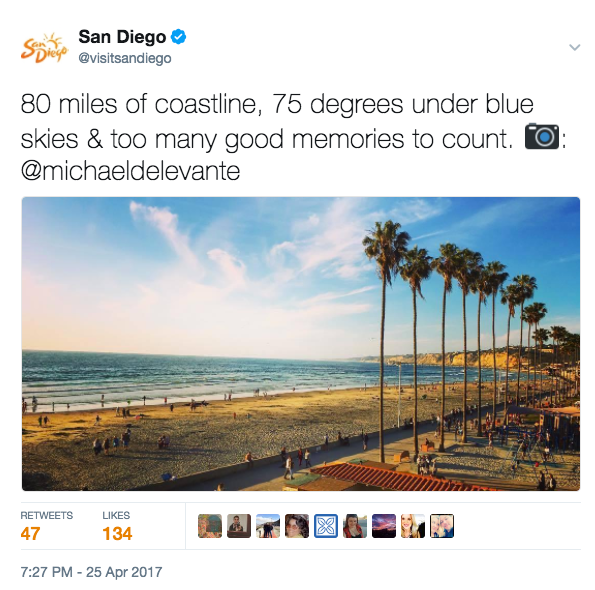 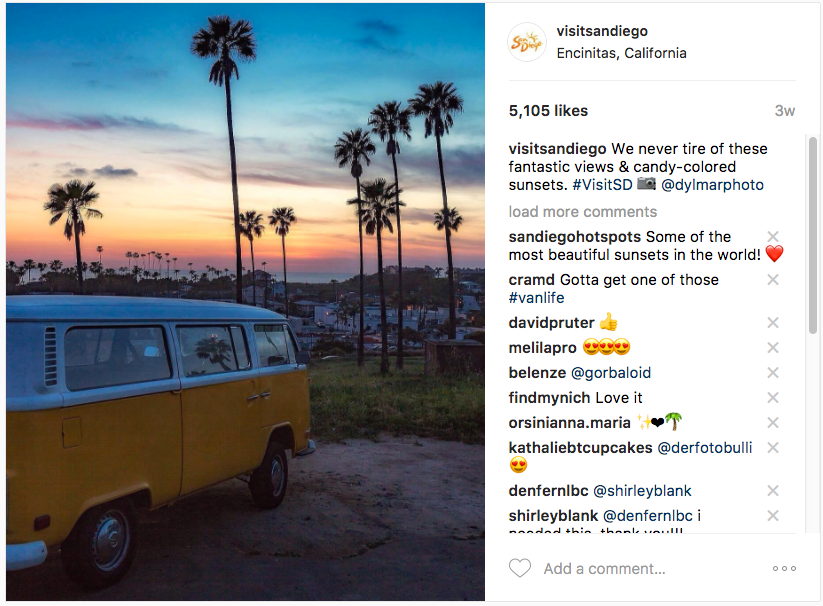 Google Plus no longer provides tracking data. We have suspended our use of the Google+ platform after reviewing analytics data and determining the return on investment does not warrant the time invested in the platform.

Web traffic for April included 589,606 user sessions and we posted a total of 153 Tweets, 95 Facebook posts (including ‘Dark’ advertising posts), 35 Google+ Posts (Based on trends and usage, Google+ will no longer be part of SDTA’s social media efforts and recording efforts will cease) and 20 Instagram posts through our social channels, 6 blogs, and distributed 8 consumer emails.

Total domestic Google PPC for April totaled $30,047.43 generating 2.6 million impressions and 27,742 clicks for an average click through rate of 1.23%.  SDTA did not run International Google PPC in April.

In April we ran Google PPC specifically directing traffic to the Luxury and Value pages for the sub regions. Total spending in April for the sub regions was $6,062.84 generating 97,407 impressions and 2,817 clicks for an average click through rate of 2.89%. 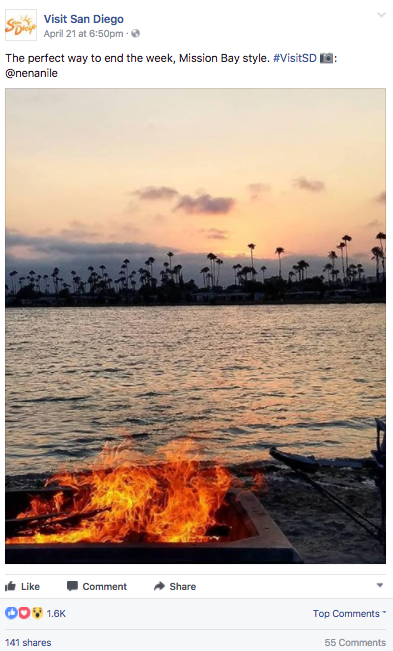 The April B2B Postcard was delivered to approximately 7,000 meeting planners and was the first in a year-long series of video emails. Each month a new video will showcase a group of venues for potential meeting and event planners to consider. The open rate for the first B2B Video Postcard was 21%, which represents over 1,430 meeting planners. This was the second highest open rate in over two years. Some highlights of the email included: 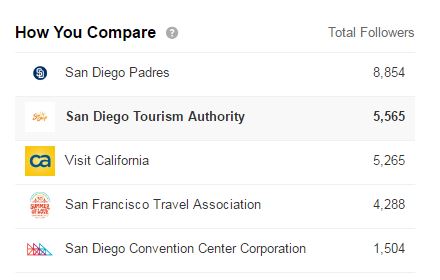 @SDTAConnect Twitter base grew by 1% from last month to 3,214 followers. There were 83 tweets during the month.

This month, the tweet with the most exposure (2,394 impressions) was the new video created by San Diego County Regional Airport Authority promoting the value and impact of travel on the destination.

The tweet with the most engagement helped promote the Gaslamp Quarter 150 celebratory events. 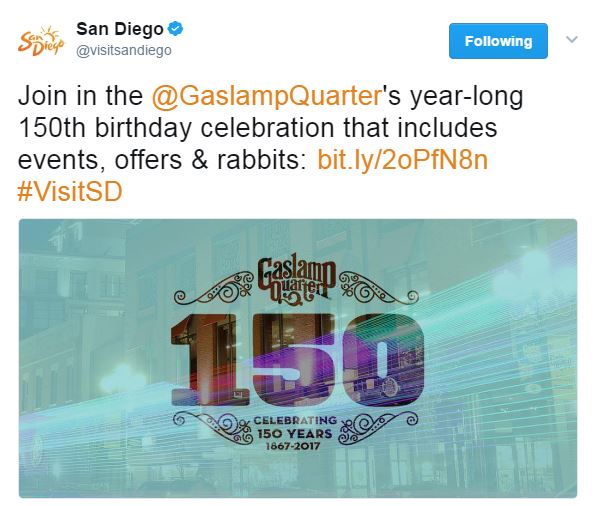 The B2B account earned over 33,400 impressions during the month of April.

During April, SDTA launched the “Awesome All Year” campaign promoting upcoming major events. The $1.4 million campaign, which runs through June, includes out-of-home in Los Angeles and Phoenix as well as national digital advertising. Paid social canvas and slideshow units are running on Facebook and Instagram and native content articles, listicles and infographics are running with Buzzfeed, Nativo and Thrillist.

April also marked the end of a majority of spring advertising program of work. Spot television in San Francisco and Sacramento continues in May, and PPC, OTA and paid social will continue through June.

18 Members attended the Open Office Hours on the 28th to learn how to best maximize benefits, and engage with the SDTA’s Communications team. 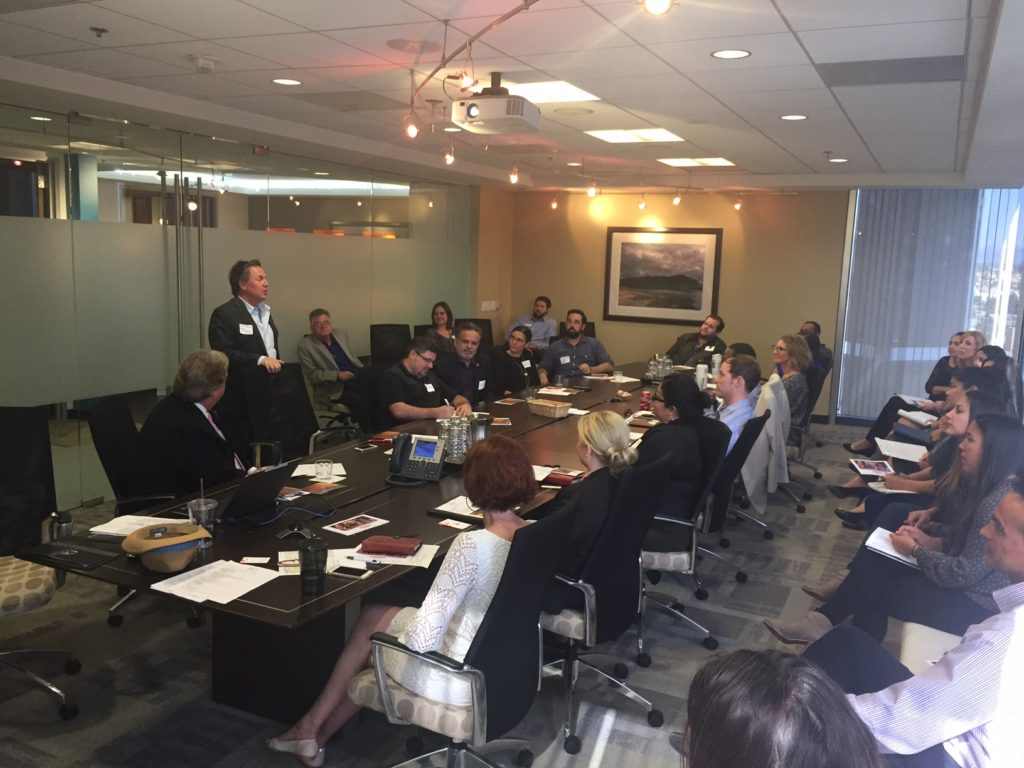 The team surpassed their annual goal of $1 million in advertising sales across the SDTA’s channels.

The SDTA also entered into a licensing program with Bay City Brewing on a collaboration brew. The team is currently working on naming and branding the beer, which should be available in early summer.

Events
Over 138 golfers registered for the annual SDTA Hospitality Open presented by GES. The event was successfully hosted at Sycuan Resort, and the event raised $10,000 for our beneficiary Alpha Project. 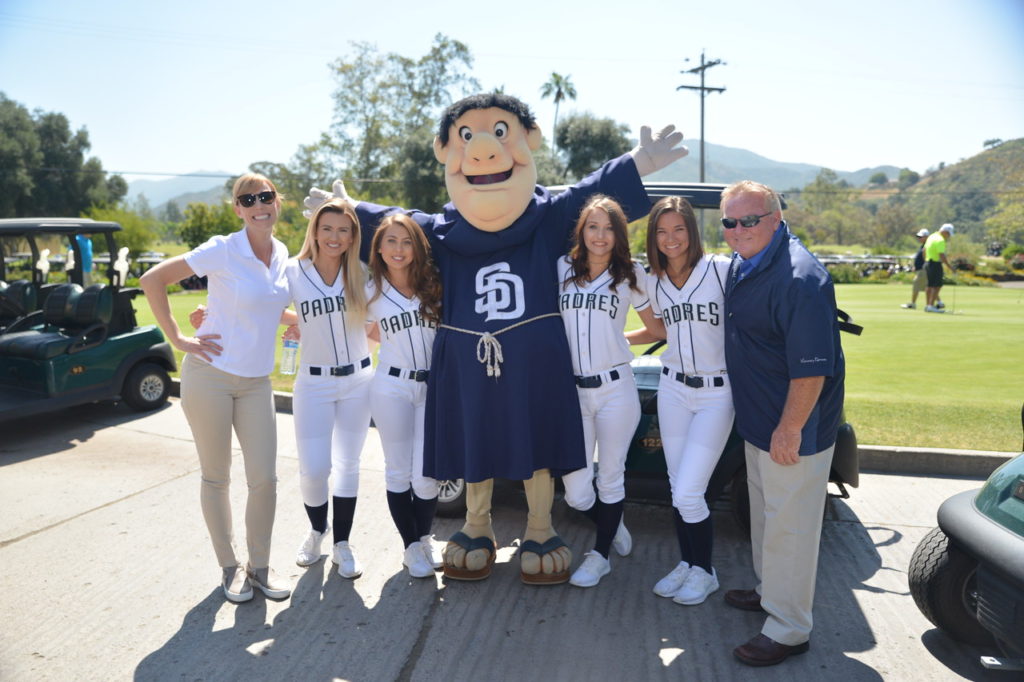 The Hotel Meetings Sales Team converted 59 bookings, generating 54,360 Room Nights in the month of April, up 54% to the same time last year.

Matt Schechter, National Sales Director for the Northeast, hosted clients during the popular Northeast Roadshow. Matt was joined by 15 hotel partners for this three-day packed schedule from April 4-6 in New York City and Philadelphia. The Roadshow started in New York City with a VIP Luncheon and presentation with top-level decision makers at the exclusive Rainbow Room. The following day, Matt and the partners hosted a lunch and reception in Philadelphia. The roadshow finished strong back in New York City where partners and customers enjoyed a unique dining experience at the Todd English Food Hall in The Plaza Hotel when Chef Todd English himself made an appearance. This three-day, four-event tour attracted close to 150 individual clients. Matt collected seven leads totaling close to 6,000 room nights, with more to come.

The Hotel Sales and Citywide Sales teams came together along with 33 member partners for the annual Chicago Cubs Hope Opener Client Event in the team’s hometown of Chicago. 155 clients attended to cheer on their 2016 World Series Champions during this exclusive rooftop event.

Jennifer Hicks, National Sales Director hosted 23 customers in Atlanta, Georgia. The two-day event started with client happy hour reception in Buckhead and finished with a successful collaboration with Northstar Meetings Group where attendees met for lunch and a presentation on San Diego, and were gathered into teams for a demonstration on how to make Ricotta toast with Avocados, a San Diego favorite. Jennifer received two leads totaling almost 300 room nights.

Members of the group and citywide hotel teams were presented a proclamation from the San Diego City Council for Global Meetings Industry Day – April 6, 2017. 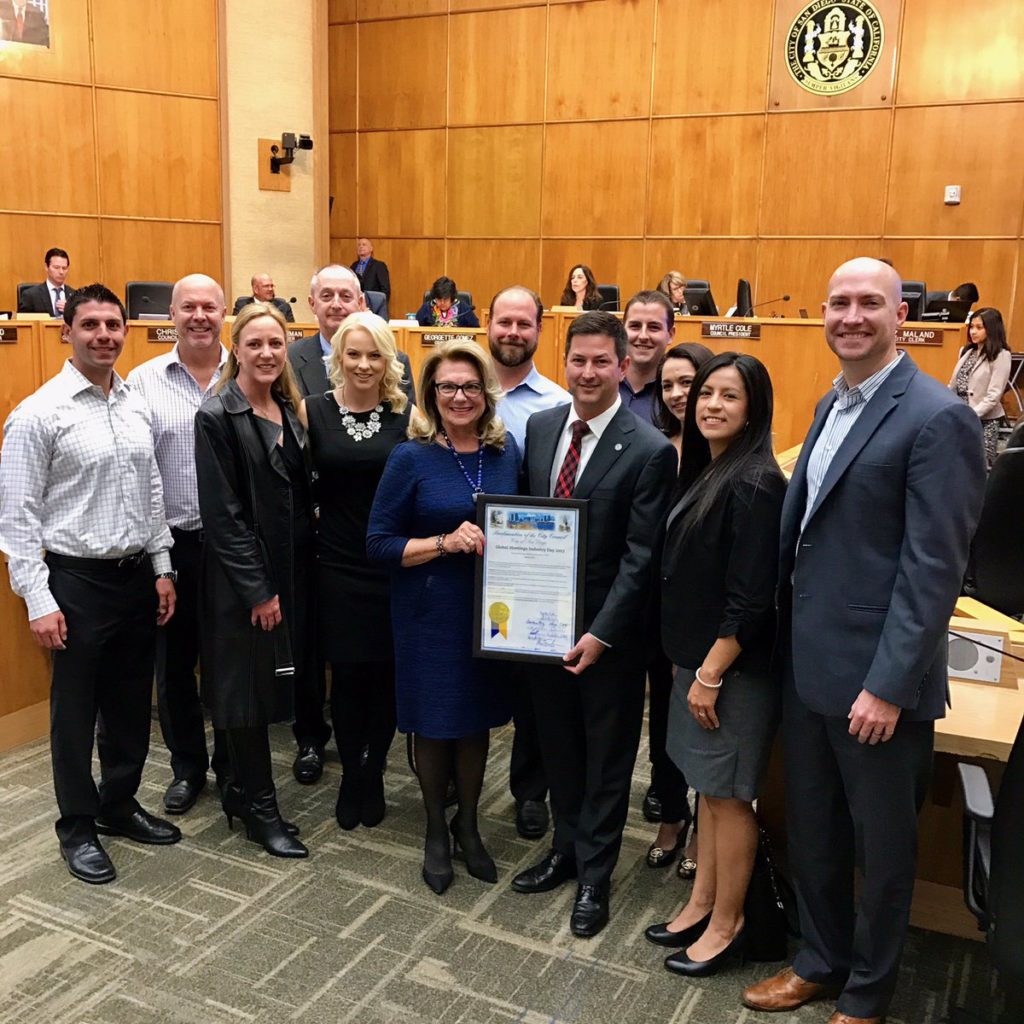 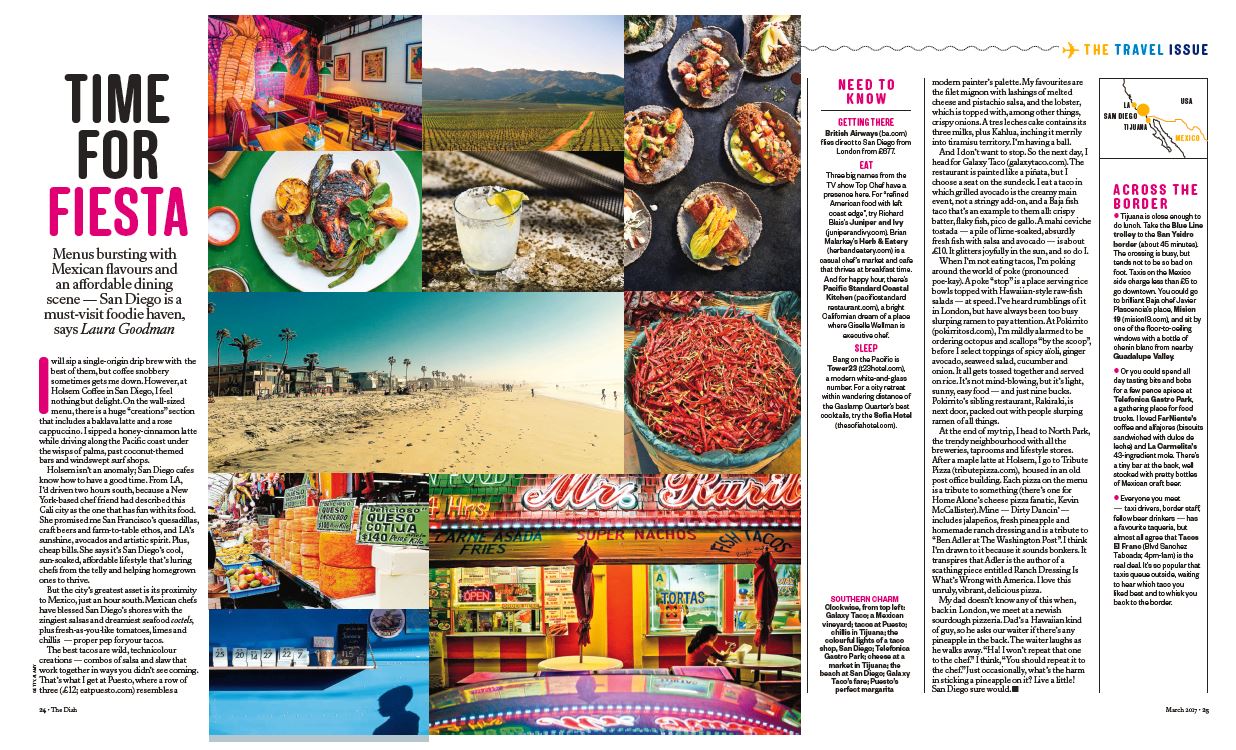 The team also hosted travel media outlets from Australia and the United Kingdom in April. 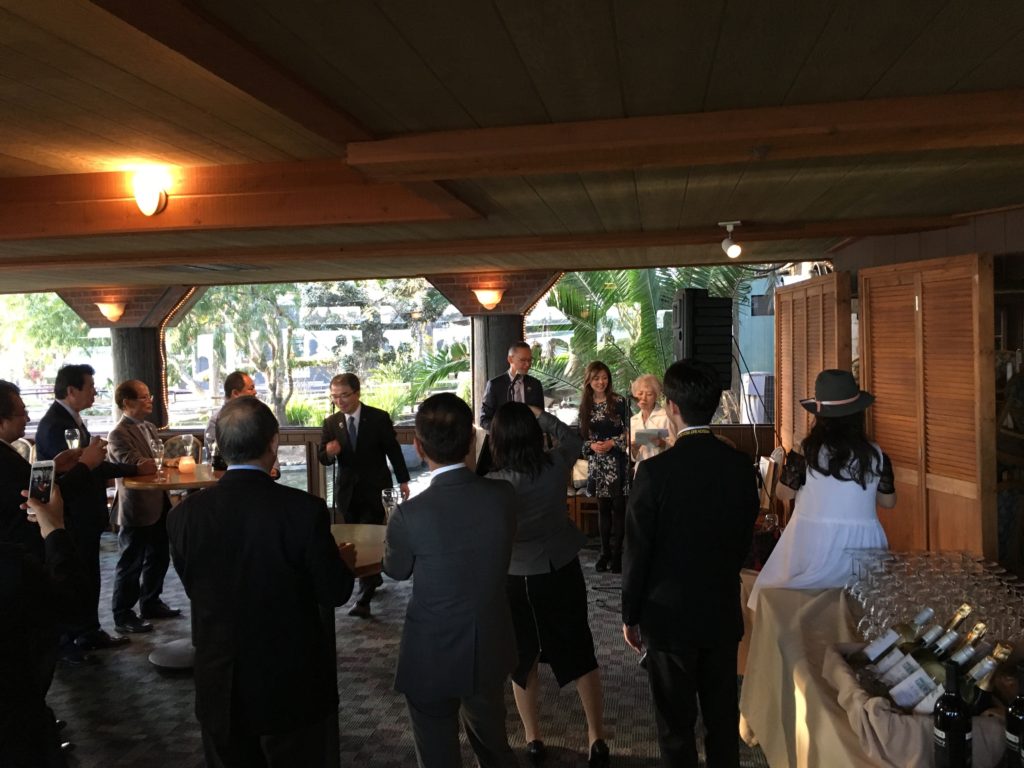 From April 8th to 14th, Riki participated in VCA China Sales Mission. During the mission, Riki visited Chengdu, Guangzhou and Hangzhou to meet one-on-one with 60 travel professionals in the region. Also he had opportunities to interact with more of the key contacts through the various events such as networking lunches, VIP dinners and agency take-overs. During the agency takeover at U-Tour office in Hangzhou, the San Diego promotion U-tour launched in late April was highlighted. 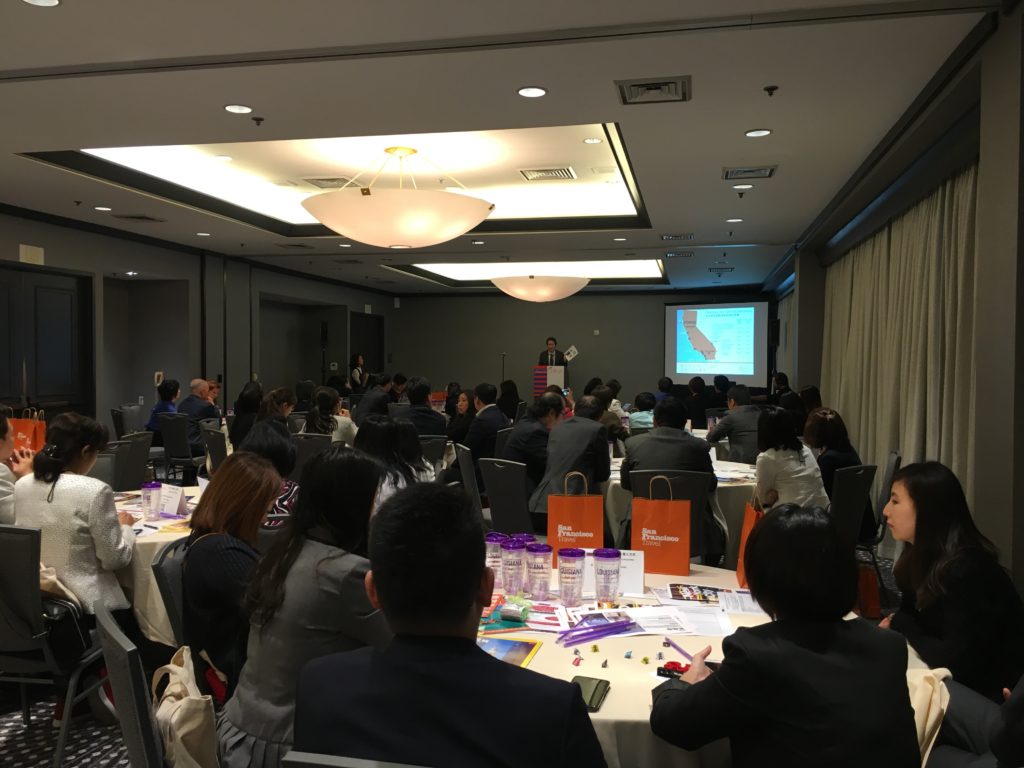 Riki also attended Active America China Summit in Portland on 24th and 25th of April. Riki had an opportunity to give a destination presentation to highlight San Diego’s offerings to about 70 Chinese tour operators attended the summit. Also, Riki had over 20 one-on-one meetings with the operators to provide more information and discuss the ways to promote San Diego products. 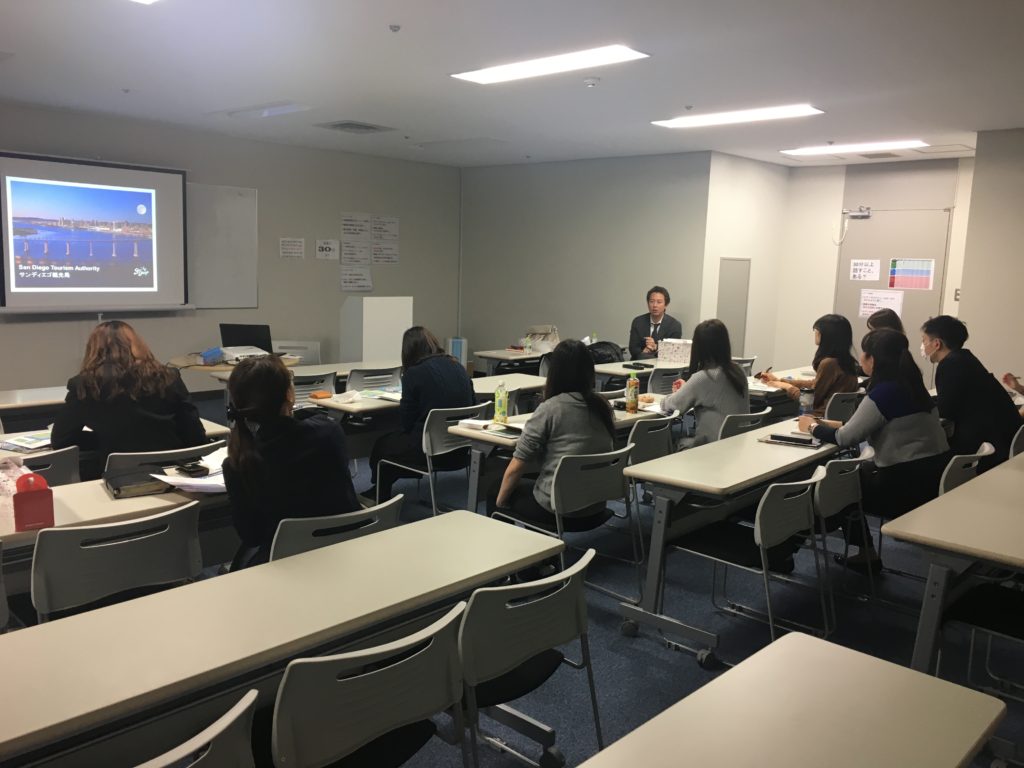 The SDTA Travel Trade team attended 3 tradeshows, three Travel Missions/Roadshows. The team also conducted six Travel Trade Familiarization tours showcasing San Diego to 107 clients. The number San Diego Specialists increased with the certification of 12 new specialists, and we are excited to proceed with a brand new platform and program for our Specialist Program.