Below are some of the sales & marketing highlights from various departments during the month of October 2016.

Web traffic for October included 599,071 user sessions between the desktop and mobile websites and we posted a total of 74 Tweets, 44 Facebook posts, 18 Google+ Posts and 19 Instagram posts through our social channels, 3 blogs, and distributed 6 consumer emails. Social Media production was lower in October because of the work required to launch the redesigned SanDiego.org. 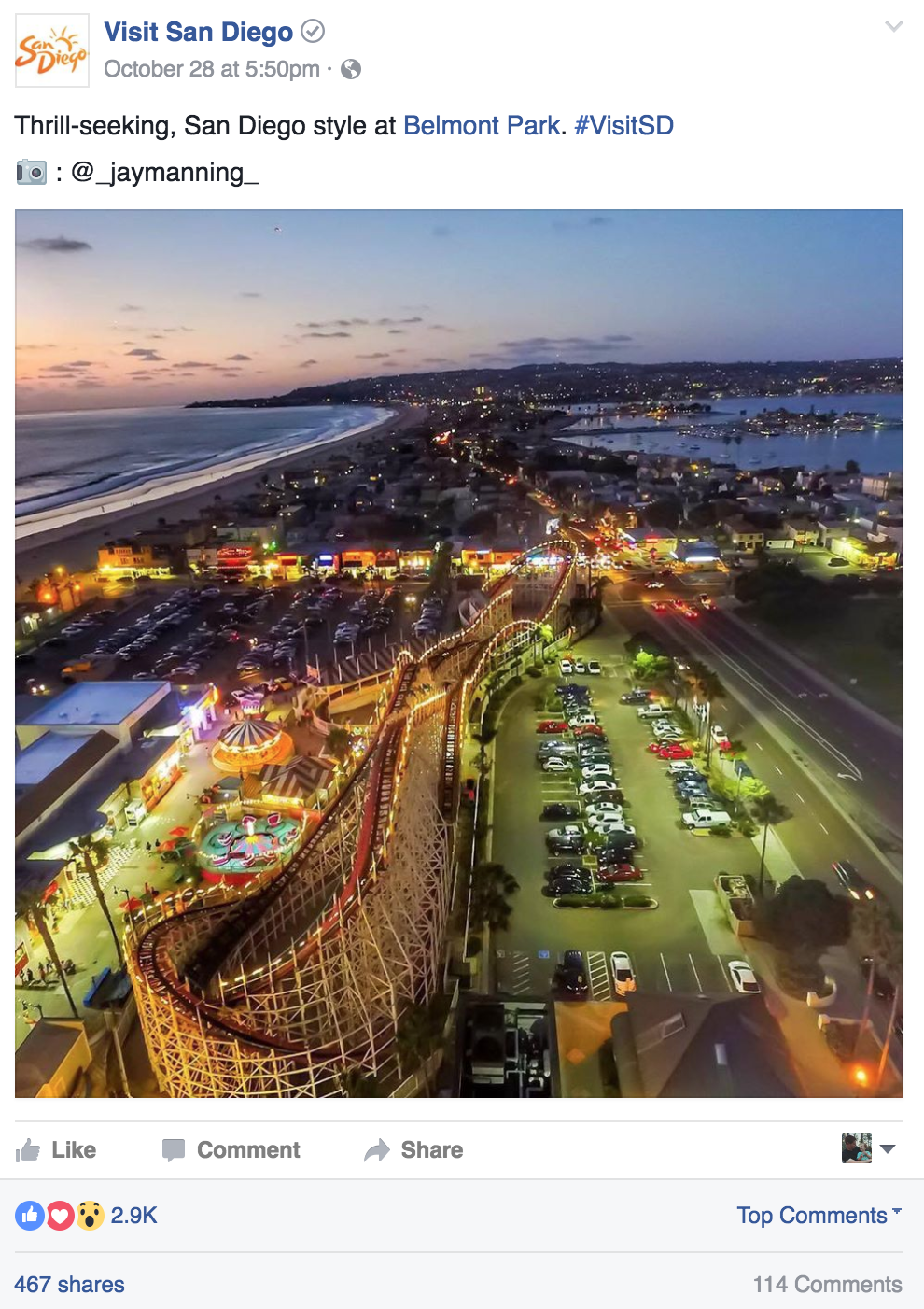 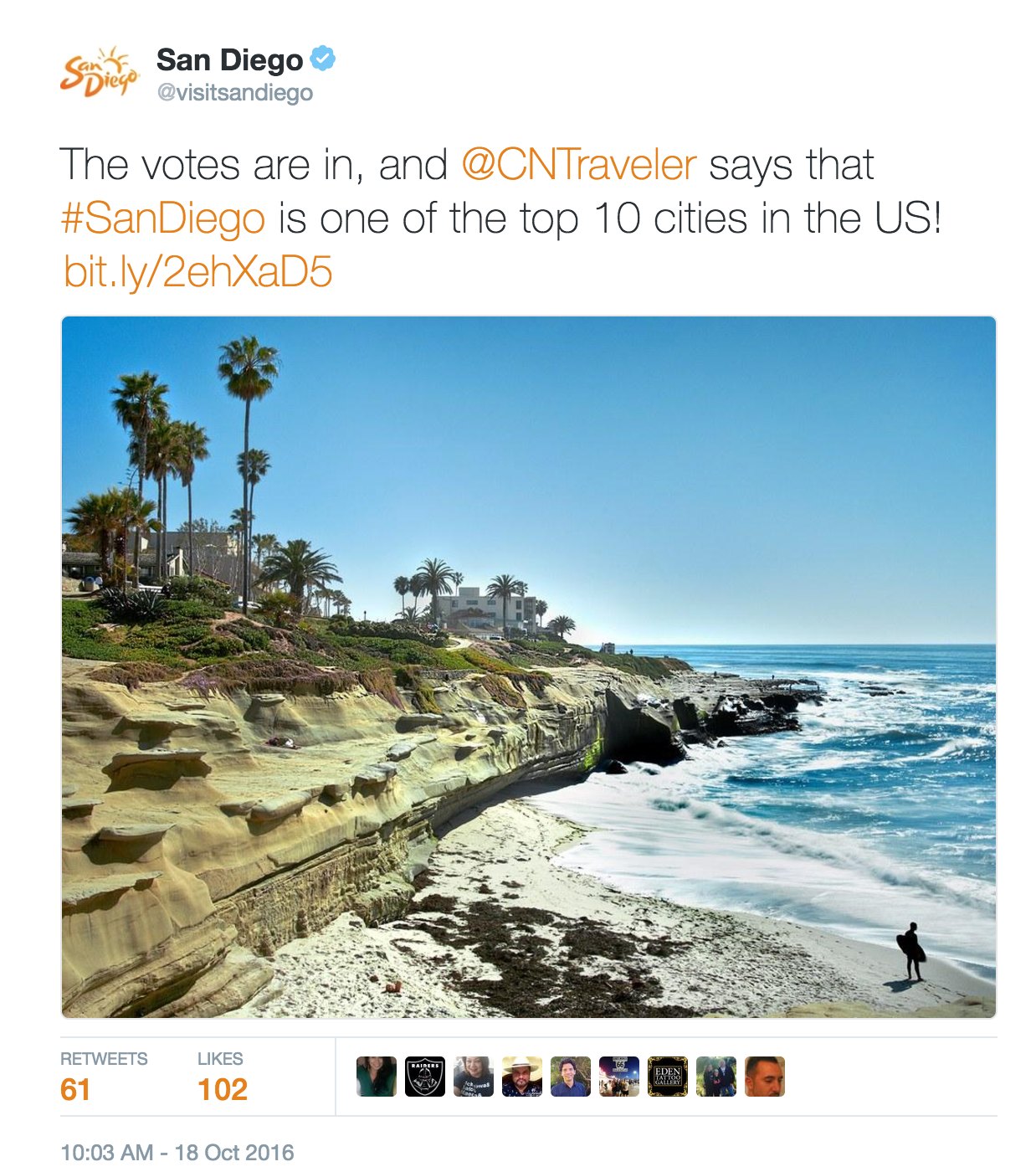 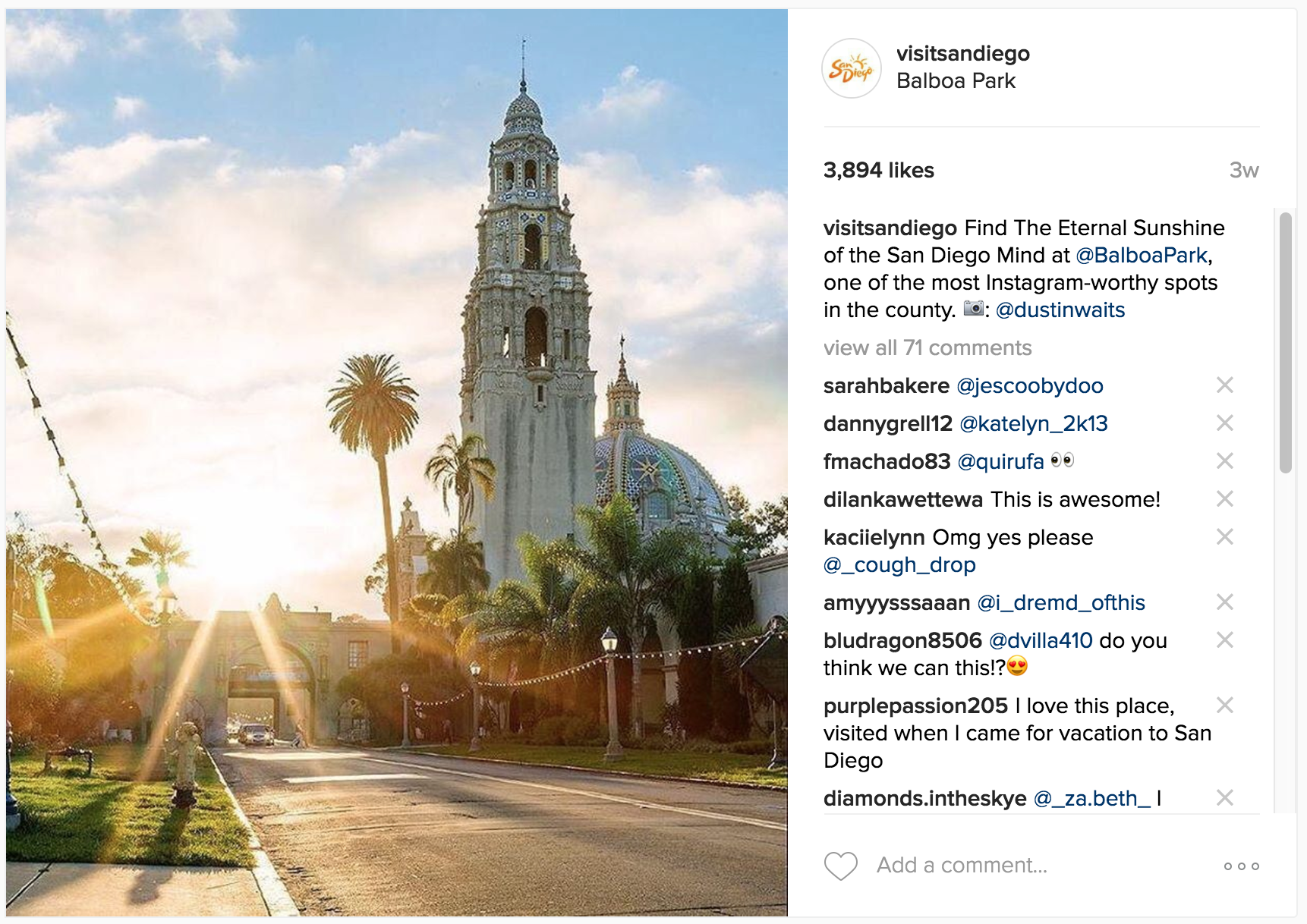 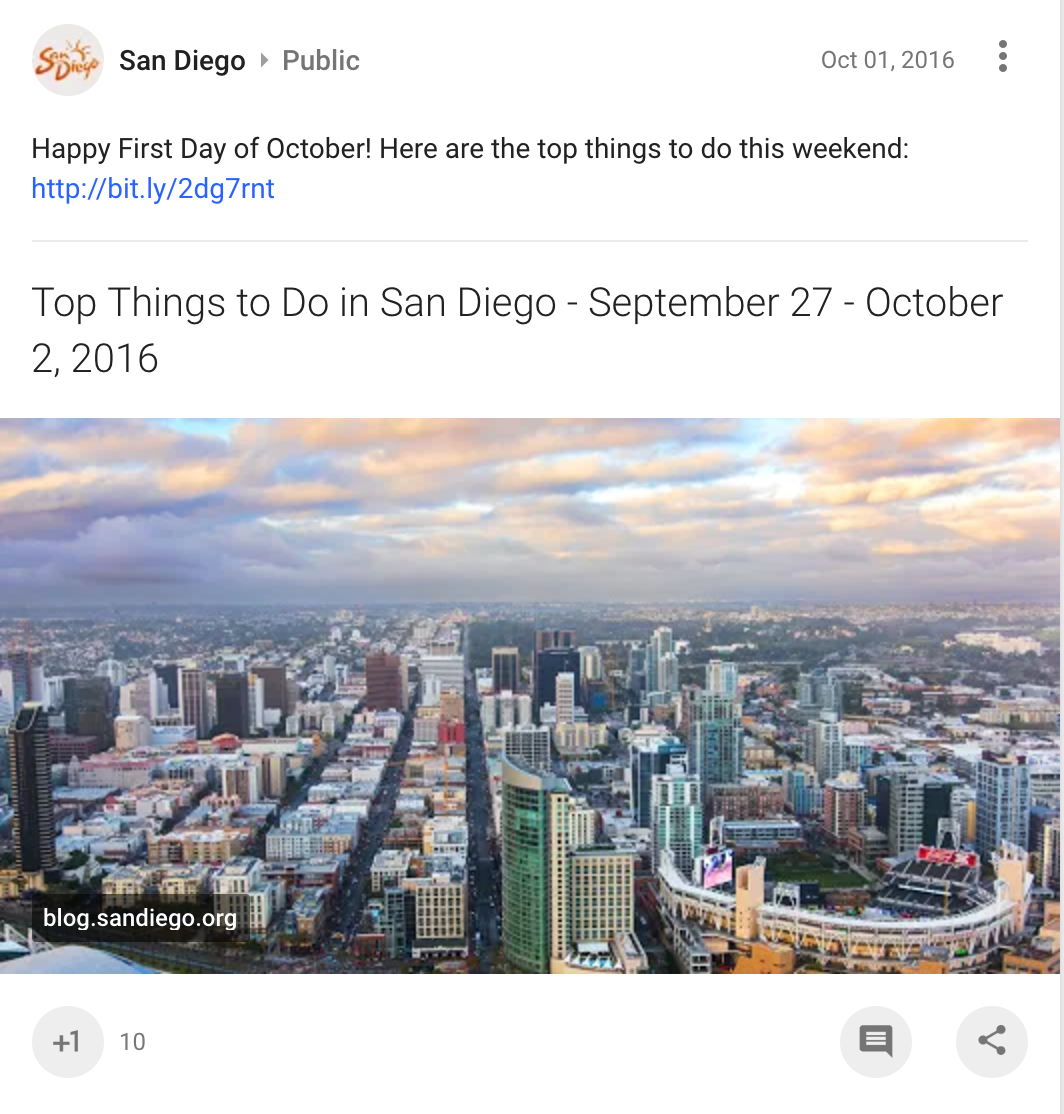 In October, we ran Google PPC directing to the Luxury and Value pages for the sub regions. Total spend in October was $5,239.59 generating 49,301 impressions and 1,938 clicks for an average click through rate of 3.9%.

Overall traffic to the Luxury and Value pages on sandiego.org was 3,020 site visitors in October. The social media team, in partnership with Casual Fridays, launched the following campaign: Fall Favorites.

EMAIL:  The October B2B Postcard was delivered to approximately 5,750 meeting planners and featured unique meeting opportunities in the urban communities of San Diego. The open rate for the B2B Postcard was 16.64%, which represents over 932 meeting planners. Some highlights of the email included the Gaslamp Quarter, Little Italy, East Village, North/South Park, and Hillcrest. The email also featured the Site Experience Award presented to hotel partners at our annual workshop.

LinkedIn grew by .8% from last month to 5,237 followers, earning more than 9,100 impressions. Year-over-Year the LinkedIn Audience grew by 20%. 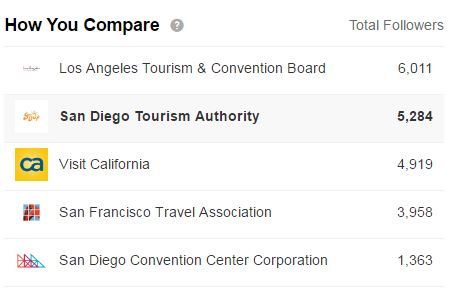 TWITTER:  @SDTAConnect Twitter base grew by 3% from last month to 2,901 followers. There were 48 tweets during the month.

This month, the tweet with the most exposure (1,559 impressions) was a distribution of our position on ballot measures C&D, featuring Union-Tribune and City Beat articles supporting our stance. 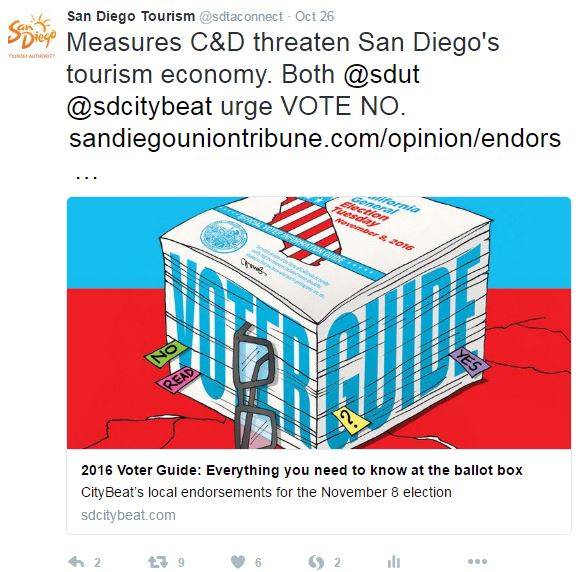 The tweet with the most engagement was a video shot on location at IMEX. B2B Editor Nick Karvounis interviewed meeting planners gathering testimonials about the meeting planning experience in San Diego.  It received 772 views from the Twitter post. 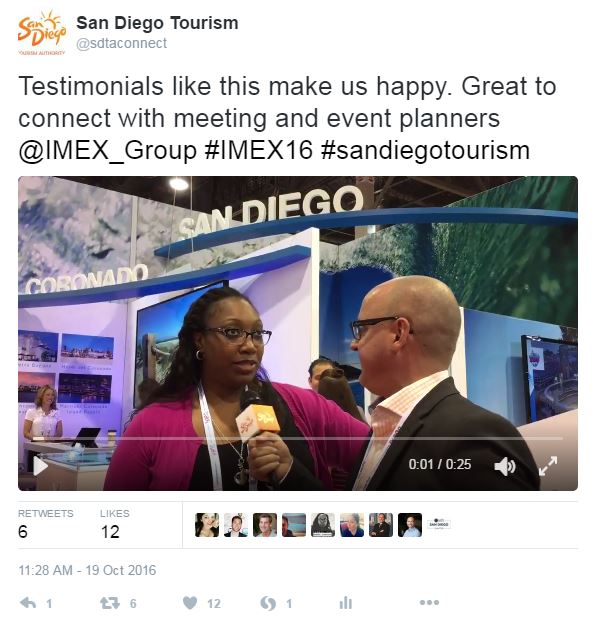 The B2B Account earned over 22,800 impressions during the month of October.

In October, SDTA ran an affluent ad and advertorial in Departures magazine at a media cost of $107,171.00 with 659,329 impressions delivered. There was no other sub-region activity in October.

In September, San Diego Tourism Authority kicked off a Brand TV campaign with Carat Canada at a total cost of $140,000.00 including a BUSA contribution of $18,260.87 with 23,945,334 impressions delivered. There was no other international activity in October.

The Hotel Meetings Sales Team converted 84 bookings, generating 66,221 Room Nights in the month of October, up 55% from the same time last year.

Both hotel and citywide sales teams attended IMEX America in Las Vegas with 17 member partners. IMEX is THE hosted buyer program that guarantees highly qualified customers who book business. With over 3,200 hosted buyer customers from 60 countries and 3,250 exhibitors representing 139 countries, IMEX promotes great business, educations and plenty of networking opportunities. This show saw a 5% increase in buyer attendees over 2015. The SDTA booth hosted 10 group appointments and met with over 130 customers during one-on-one individual pre-scheduled appointments. In addition to scheduled appointments, there were many drop-in buyers who sought information on the destination. SDTA collected 11 RFPs onsite totaling 7,773 potential room nights for the destination with many more to come. 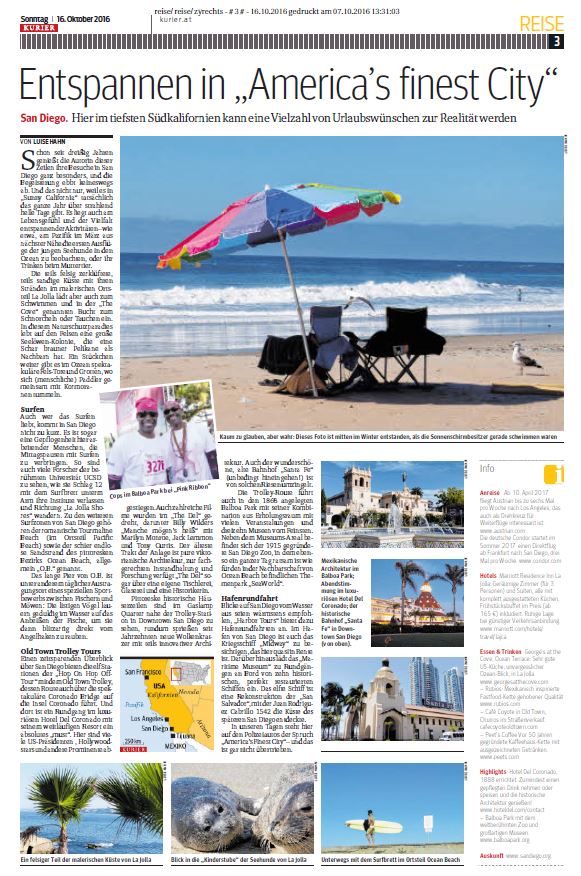 In October, Communications pitched and assisted Univision’s national morning show Despierta Amercia as it aired live from San Diego on October 12-14 and featured SeaWorld, Coasterra and the Rise Up as One cross border music festival in San Diego.

In partnership with Visit California, International Public Relations hosted a group of 10 top digital influencers from Korea. International PR also hosted a variety of print and social media from Brazil, Germany and the UK.

San Diego was host to the 2016 Annual Conference for the Ensemble Travel Agent Consortia. During the week of October 17th the conference brought approximately 600 travel agents from across the US, Canada & Australia. The Travel Trade team coordinated sightseeing opportunities for approximately 50 agents who arrived early for the conference and were present throughout the week at a number of activities.

In China, there were two Club California Product Development meetings held during the month of October. Yaseen Yin, Travel Trade Representative in Shanghai, participated the Guangzhou session on October 13th and 14th, and Jayce Guo, Travel Trade Representative in Beijing, participated in the Chendu session on October 27th and 28th. In each session, SDTA representatives had the opportunity to give a destination presentation to educate and update the top accounts in the region. Also they were able to further network with clients during team building activities at each event. 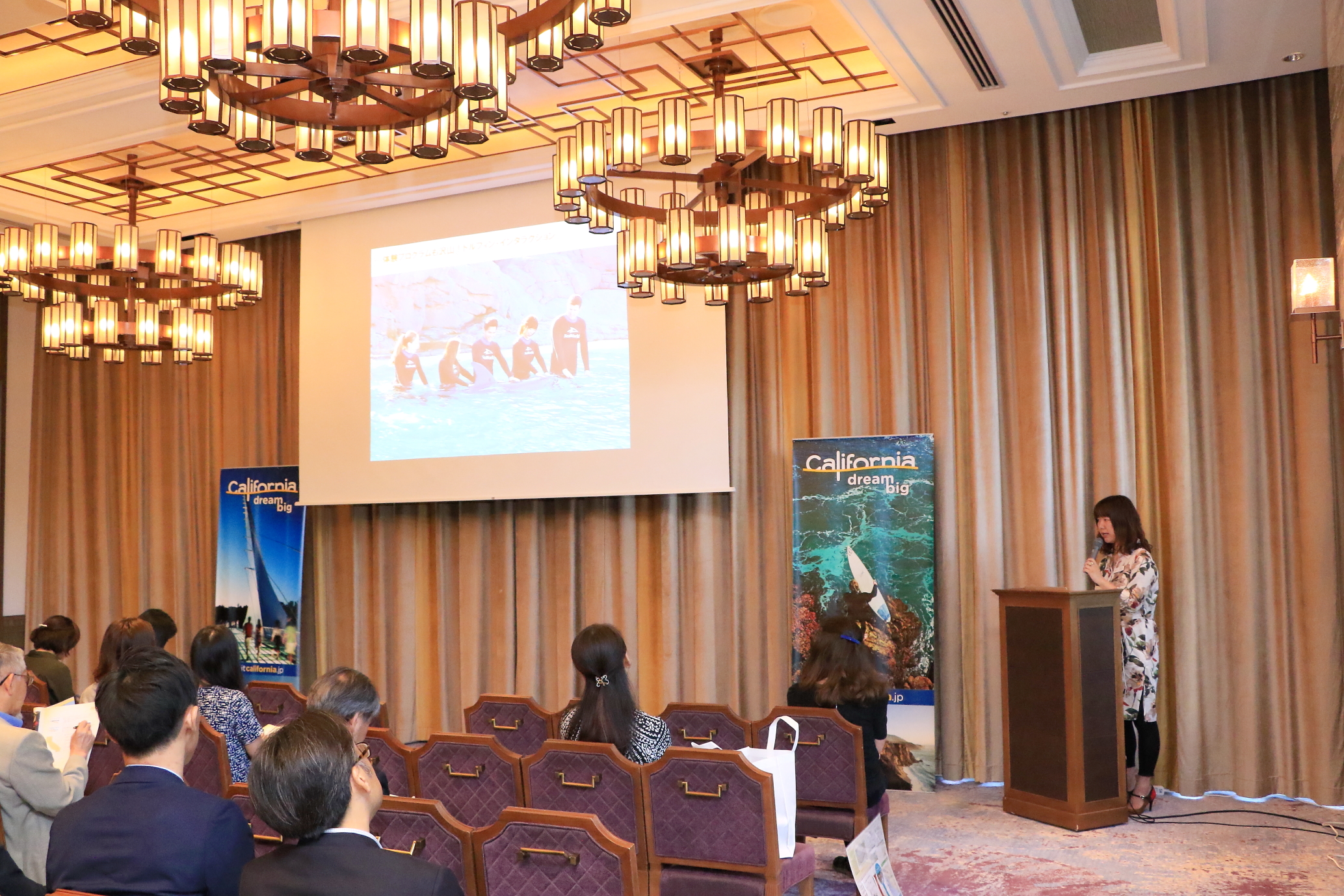 Tomoe Matusnaga, Travel Trade Representative in Tokyo, participated in the Club California Tokyo event on October 18th.  During the morning breakfast seminar, Tomoe had a chance to provide a training seminar to about 30 retail travel agents from various retail stores in Tokyo. The afternoon / evening session welcomed over 100 travel trade professionals, where Tomoe gave a presentation to promote San Diego and network with the attendees.