Below are some of the sales & marketing highlights from various departments during the month of June 2016.

Web traffic for June included 678,319 user sessions between the desktop and mobile websites, and we posted a total of 195 Tweets, 94 Facebook posts, 47 Google+ Posts and 22 Instagram posts through our social channels, 9 blogs, and distributed 6 consumer emails. 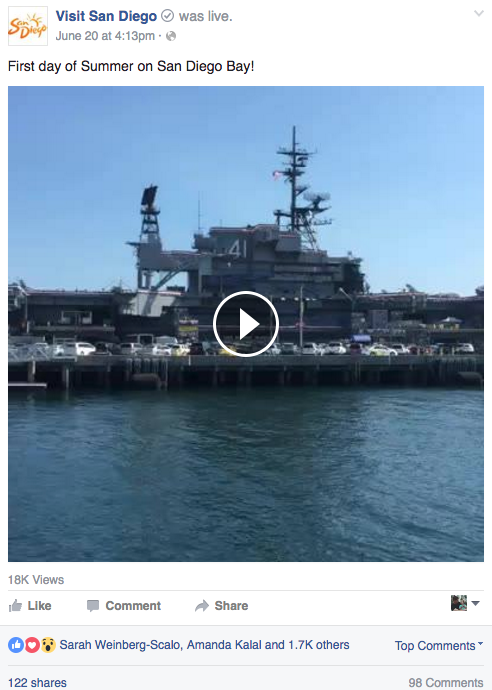 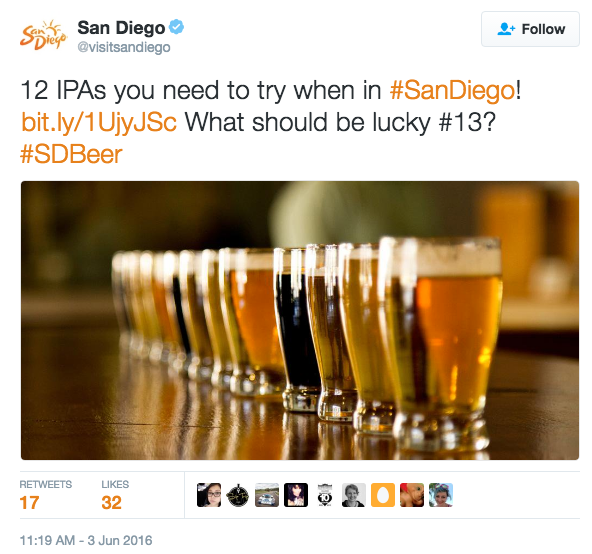 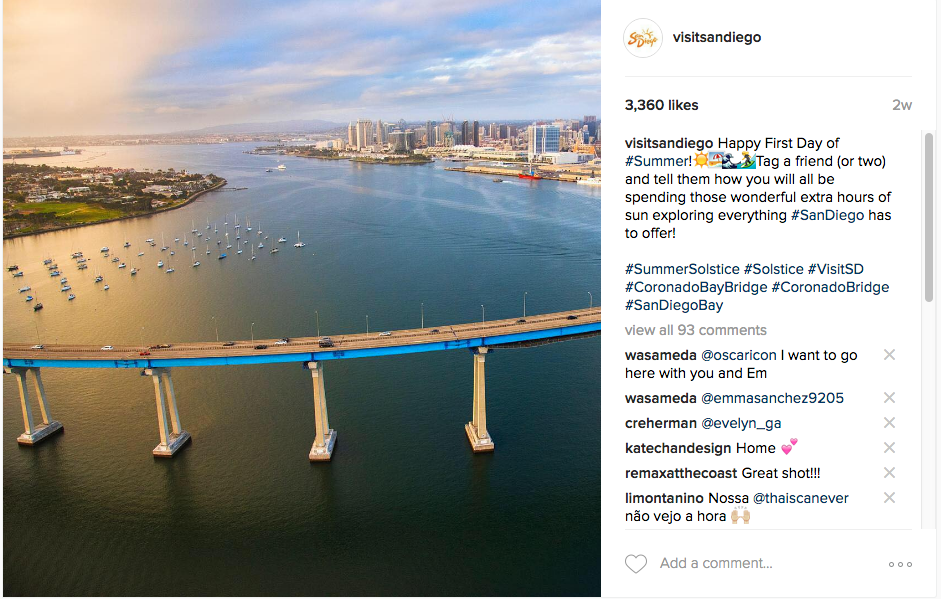 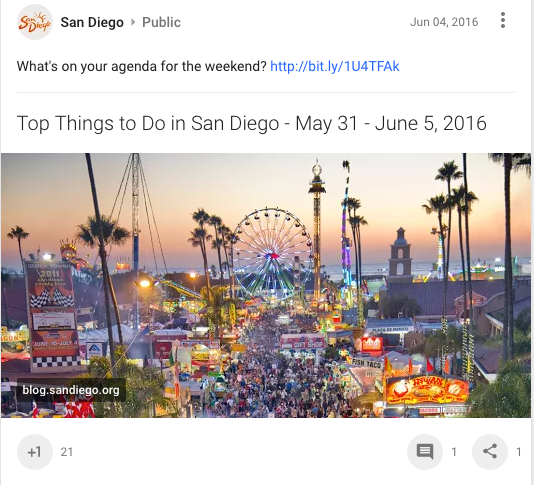 Overall traffic to the Luxury and Value pages on SanDiego.org was 356 site visitors. The social media team, in partnership with Casual Fridays, shared 74 pieces of content for the sub regions on Facebook, Twitter and Google+ highlighting Summer Things to Do, Mission Bay Sweepstakes and Things to Do around Mission Bay (Good Vibes on the Water). 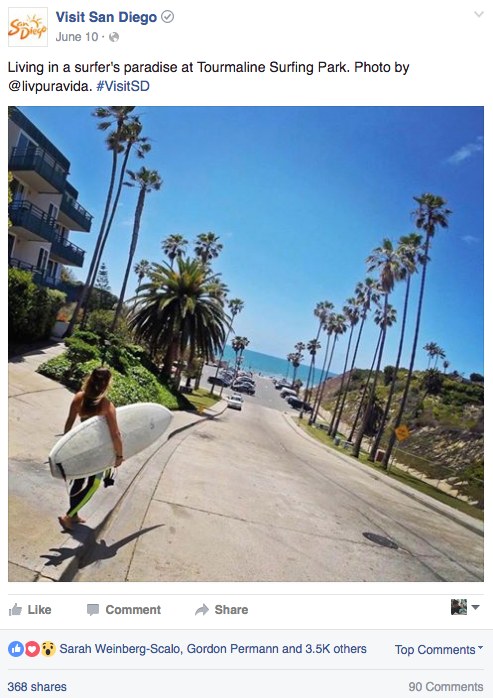 LinkedIn grew by 1% from last month to 4951 followers, earning more than 15,291 impressions. Year-over-Year, the LinkedIn audience grew by 25%. 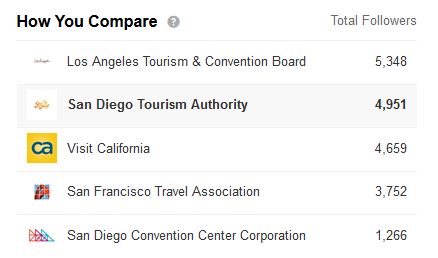 @SDTAConnect Twitter base grew by 3.4% from last month to 2,636 followers. There were 81 tweets during the month.

This month, the tweet with the most exposure (2,559 impressions) was a photo collection of the grand opening of the Marriott Marquis San Diego Marina Convention Space Expansion. This tweet also saw the largest engagement with more than 250 interactions – a 10% engagement rate.

The B2B Account earned nearly 23,400 impressions during the month of June. 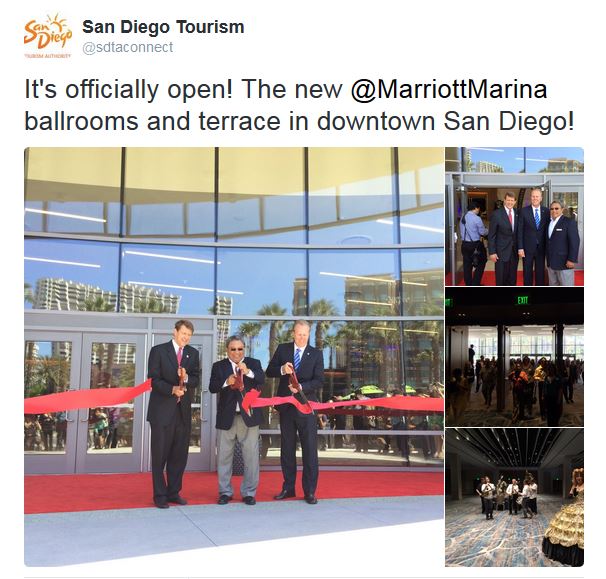 In June, SDTA continued its Canadian digital campaign with SEM running on Google. Total spend for the month of June was $8,042.82 including a BUSA net contribution of $1,340.74. Total impressions were 1,872,071.

Revenue Development – The new ticketing and event management software was introduced to the full Membership as a new added benefit. This enables Members to protect customer data, drive more revenue, and support the SDTA’s overall mission.

Historic New Member Numbers – The team had great success in June, adding 16 new Members, with a value of $7,700 in new dues revenue.

The year-end total of 121 new Members is the 2nd highest single year total ever, only behind 2010, which was inflated by the addition of the East Visitors Bureau Membership conversion. 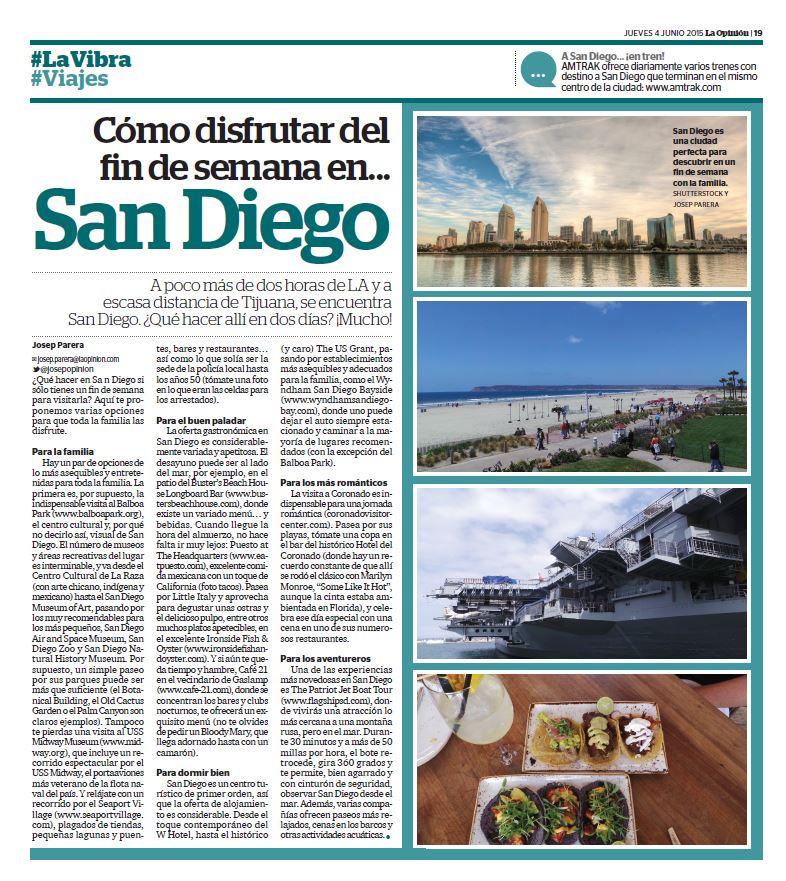 Travel Trade Director Benjamin Eastman, traveled to Vancouver. During that week, Benjamin took part in the Inaugural Flight celebration of the new Air Canada Rouge non-stop flight from Vancouver to San Diego. Additionally, he spent a day participating in sales calls with the local Air Canada representative to promote the flight and destination. At the end of the week, Benjamin joined the Port of San Diego at the cruise3sixty tradeshow – where they met and spoke with many travel agents from across the US and Canada about the fantastic cruise offerings available from – and through – San Diego in the upcoming cruise season.

Benjamin Eastman, Riki Suzuki & Albert Navarro all traveled to New Orleans in mid-June to attend the Travel Trade’s biggest tradeshow of the year – IPW. At the tradeshow, the team had 100+ one-on-one meetings with Tour Operators, Receptives, MICE Operators and more from around the world. European & Canadian clients were particularly excited about the new non-stop flight offerings into San Diego and Mexican clients continue to buzz about the Cross Border Xpress opportunity via the Tijuana Airport.

Tomoe Matsunaga, Travel Trade Representative in Japan, participated in America Workshop organized by Brand USA in Nagoya and Osaka. She met one-on-one with 12 key Tour Operators in the region to provide updated information and propose tour ideas. Also she was able to meet more of the 128 participating travel professionals during the free session time.

Following the workshops, Tomoe participated in KIX Tabihaku, the largest tourism event in Western Japan, in Osaka. The event welcomed approx. 41,000 attendees in two days. Tomoe presented at a destination seminar in front of over 120 consumers who registered to learn about San Diego.

SDTA hosted a luncheon in Torrance and invited the members of Japanese Tour Operator Association known as “Agent Kai”. Riki Suzuki, Travel Trade Development Manager, had an opportunity to give a presentation during the lunch to update 24 participating agents from LA based Japanese tour operators. Also 12 San Diego partners joined Riki to have a networking opportunity before, during and after the lunch with the Agent Kai members.

Charles Sun, Travel Trade Representative in Shanghai, participated in Club California Product Development Series in Shanghai on June 30th. He had an opportunity to give a destination presentation to educate and update 18 top accounts in Shanghai.