Below are some of the sales & marketing highlights from various departments during the month of May 2016. The SDTA held its annual meeting at SeaWorld on May 5, 2016. if you missed it, here’s a quick video recap.

Special events in May focused on AMGEN Tour of California and Mexico vs Chile Soccer Game.

Web traffic for April included 542,467 user sessions between the desktop and mobile websites and we posted a total of 144 Tweets, 90 Facebook posts, 45 Google+ Posts and 23 Instagram posts through our social channels, 10 blogs, and distributed 6 consumer emails. 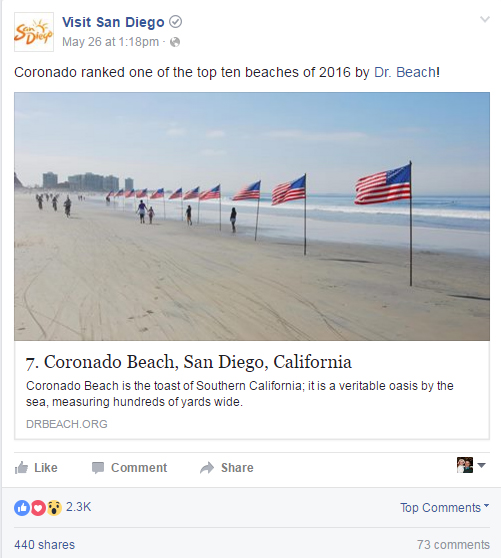 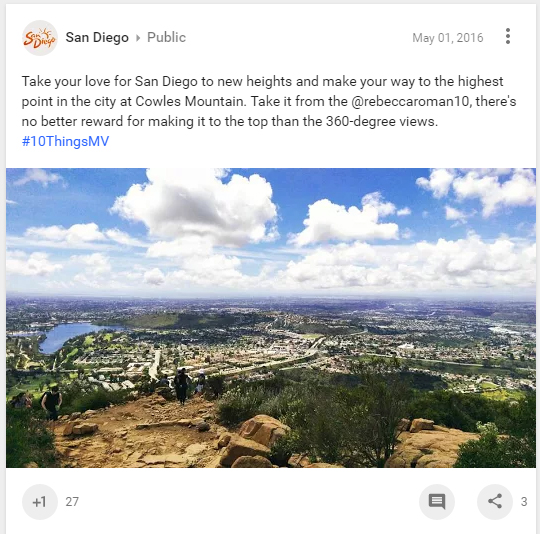 Overall traffic to the Luxury and Value pages on sandiego.org was 2,407 site visitors.  The social media team, in partnership with Casual Fridays, shared 38 pieces of content for the sub regions on Facebook, Twitter and Google+ highlighting Summer Things to Do, Scenic Drive up the 101, and re-purposing of Point Loma History content. 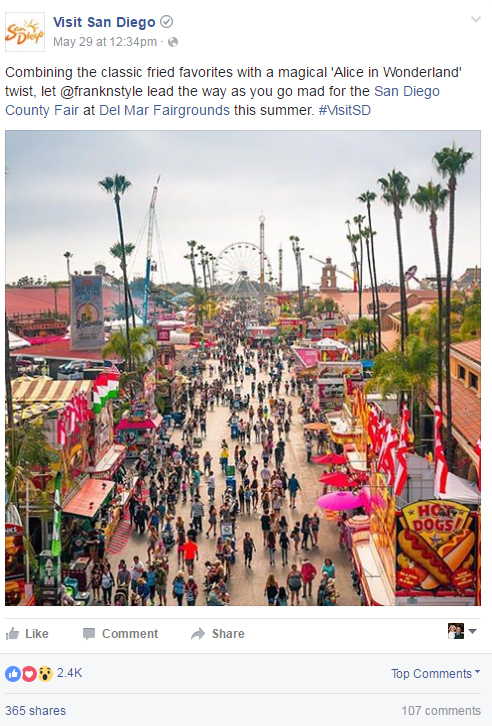 LinkedIn grew by 1% from last month to 4890 followers, earning more than 7,700 impressions. 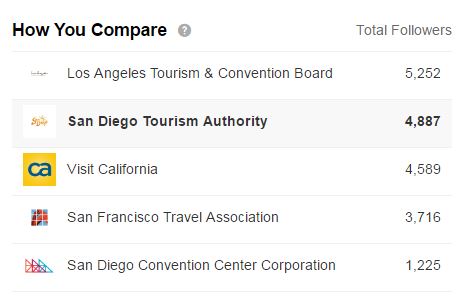 This month, the tweet with the most exposure (3,289 impressions) was a photo of San Diego County Supervisor Ron Roberts presenting Joe Terzi and Kerri Kapich with a tourism day proclamation. 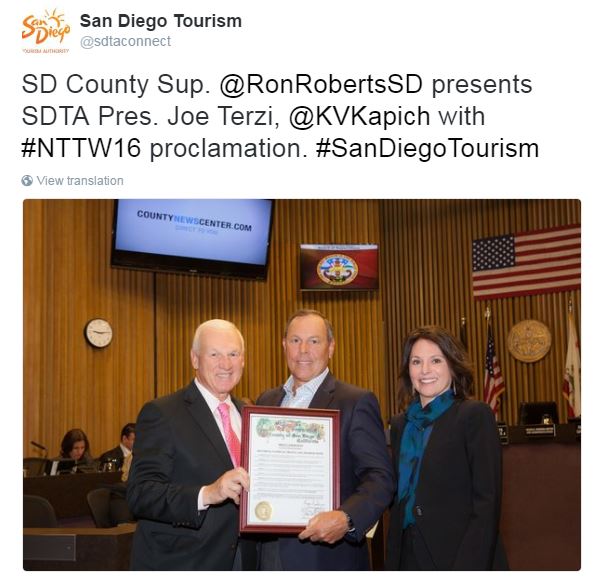 The tweet with the most engagement (35) was a photo and thank you to San Diego Downtown Partnership for including SDTA and Joe Terzi in panel discussion about convention center. 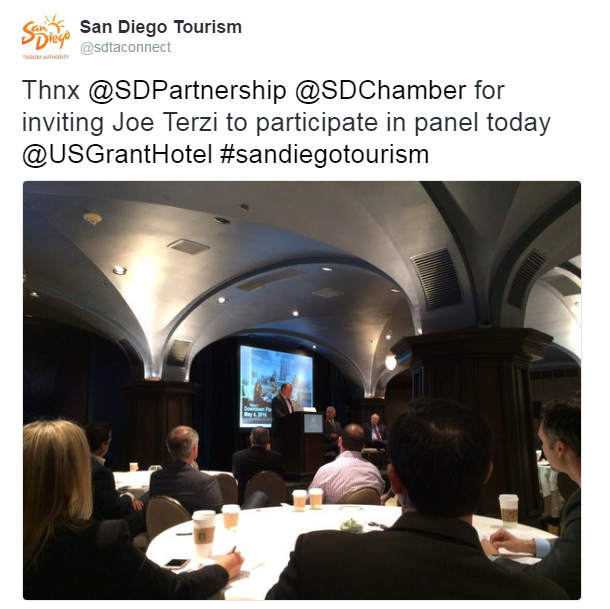 The Hotel Meetings Sales Team converted 65 bookings, which is 17 more than this same time last year, while generating 29,054 Room Nights for the month of May.

Ernie Rossow, along with five Member partners hosted HelmsBriscoe associates for lunch and HPN Associates for happy hour to share many new developments in San Diego. Together, the group met with 30 clients and received several leads.

Nur Kitmitto, National Sales Director, along with nine hotel partners hosted the Pacific Northwest Client Events from May 24-25. The team started in Seattle by hosting meeting planners for the Padres vs. Mariners baseball game. The following morning, the team caravan-ed to Portland to host planners for an interactive cooking demonstration at the well-known Park Kitchen. Together, the group met with close to 40 clients. 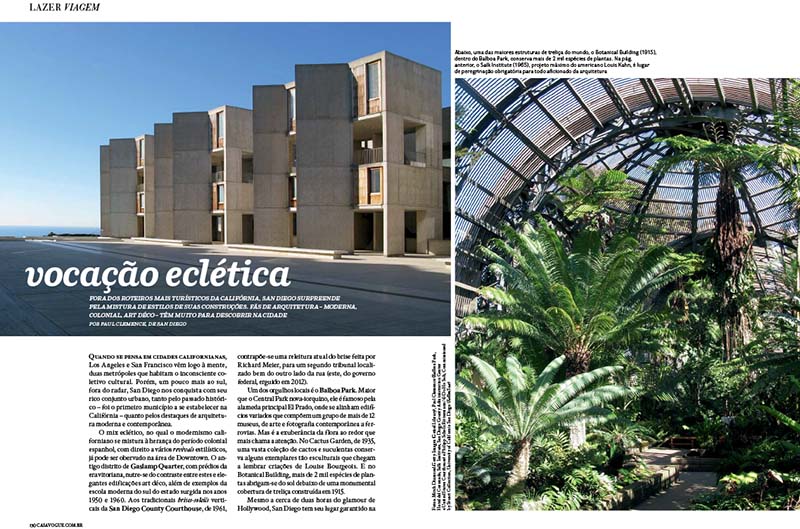 The PR team worked with contractor Darren Pudgil to get local media coverage of the SDTA annual meeting on May 5 and coverage of the Commission for Arts and Culture’s annual Economic Impact Report, released on May 27.

Travel Trade Development Manager, Albert Navarro, and six San Diego members visited seven AAA Arizona offices.  Over 60 agents and travel managers met with our members to learn about the latest and greatest San Diego has to offer. The group also met with the AAA Arizona Headquarters team and call center staff to educate them on San Diego and to launch a San Diego booking contest among the Arizona branches.

Albert Navarro, Travel Trade Development Manager, and five San Diego partners visited the Walt Disney Travel Call Center in Anaheim for a training and lunch in early May.  Over 250 agents and training managers were on-hand to learn about the latest and greatest San Diego has to offer.   Agents were quizzed on their San Diego product knowledge with a chance to win SD prizes.

SDTA Tokyo office representative, Tomoe Matsunaga, participated in Visit California’s trade event “Club California” in Fukuoka, Japan on May 27th. She had opportunities to give a presentation to educate about 40 key travel professionals in the region and to network with them throughout the event.