Below are some of the sales & marketing highlights from various departments during the month of April 2016.

Web traffic for April included 537,274 user sessions between the desktop and mobile websites and we posted a total of 174 Tweets, 96 Facebook posts, 48 Google+ Posts and 20 Instagram posts through our social channels, 8 blogs, and distributed 5 consumer emails. 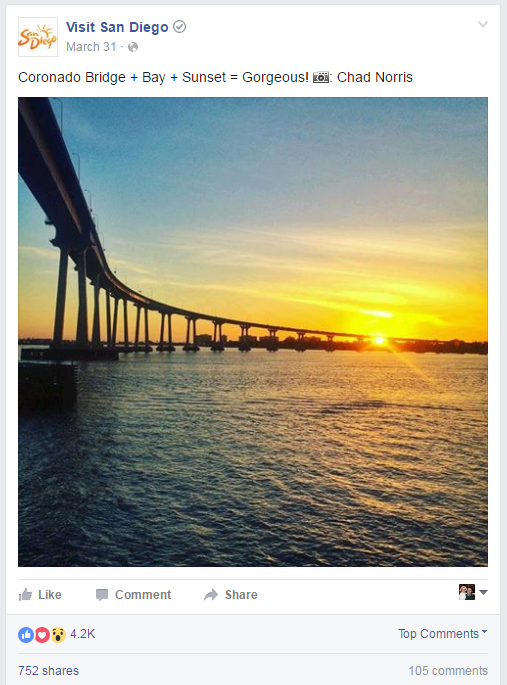 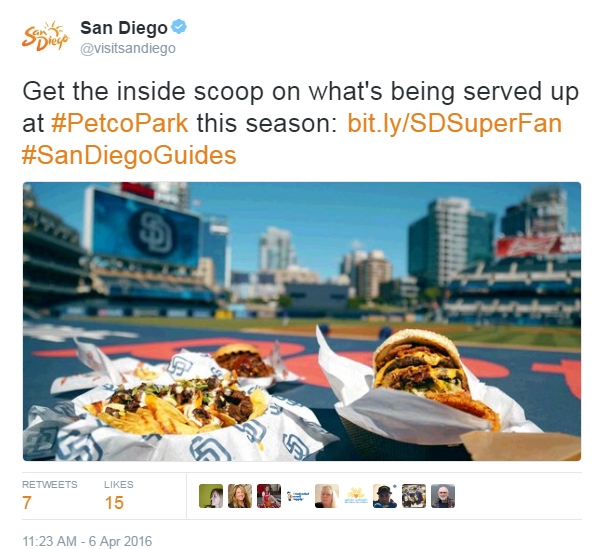 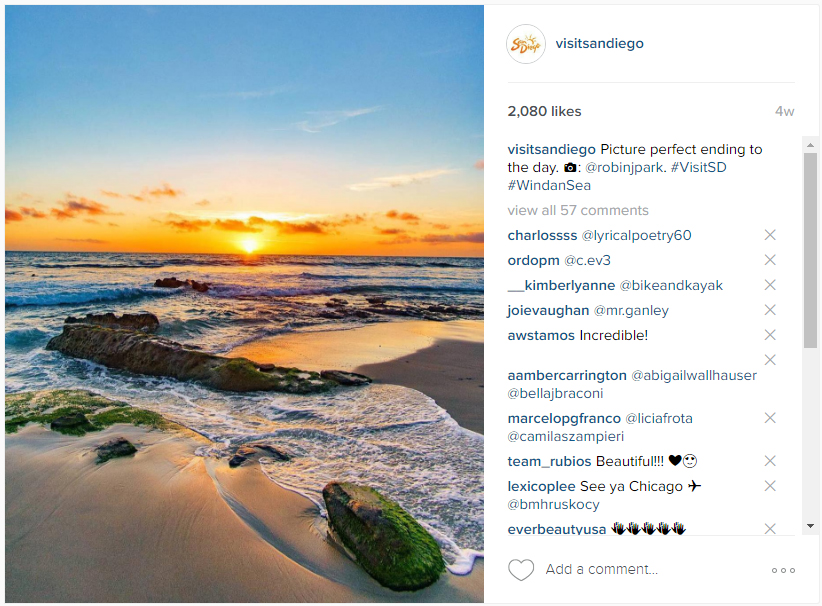 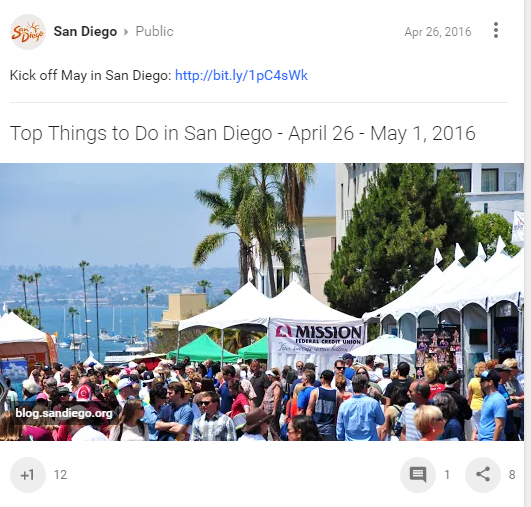 Overall traffic to the Luxury and Value pages on sandiego.org was 1,101 visitors.  The social media team, in partnership with Casual Fridays, shared 66 pieces of content on Facebook, Instagram, Twitter and Google+ highlighting restaurants in Petco Park and the Sub Regions, 10 Things Within 10 Miles of Mission Valley, and Getting Around Mission Bay. 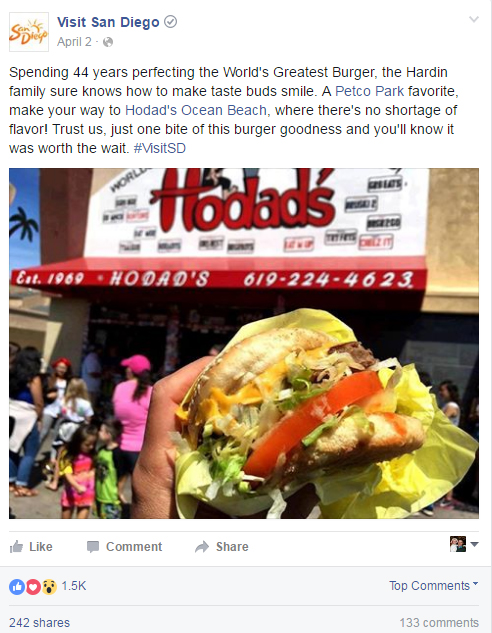 LinkedIn grew by 2% from last month to 4836 followers. 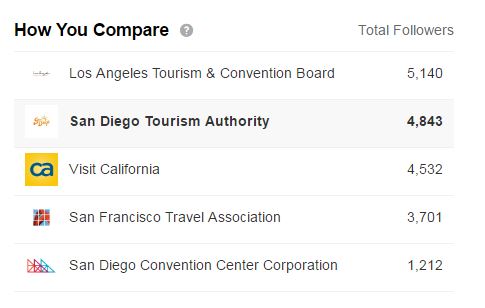 @SDTAConnect Twitter base grew by 3.1% from last month to 2,444 followers. There were 104 tweets during the month.

This month, the tweet with the most exposure (3,539 impressions) was a promotion of Amgen Tour of California cycling race, with a video link:

The tweet with the most engagement (72) was a photo and announcement of the ribbon cutting for two new hotels in San Diego.

Revenue Development – The SDTA entered into an event partnership with the San Diego Film Festival as part of the venture with ticket software partner TicketSauce. The Festival attracts over 20,000 annual attendees.

SDTA Golf Tournament – The Marketing Partnerships team, along with Event Management, produced the SDTA Hospitality Open. The event drew 130 golfers to Steele Canyon Golf Club. Highlights included a putt by a Member for $10,000 (which was not made), and appearances by the Pad Squad and Swinging Friar to entertain guests. This year we also introduced a new logo and identity for the event and a perpetual cup which will bear the names of winners.

As a result of the event, a donation of $10,000 will be made to our beneficiary, the Alpha Project.

New Members – Eight new Members joined, valued at over $6,000 in Member dues. We’re happy to welcome these new members in the month of April.

The Hotel Meetings Sales Team converted 73 bookings, +19% to April of last year, generating a total of 25,458 Room Nights for the month.

The Hotel Sales and Citywide Sales teams came together along with 24 member partners for the annual Chicago Cubs Client Event in Chicago. 176 clients attended to cheer on their favorite team during this exclusive rooftop event during the Cubs Opening Day.

Matt Schechter, National Sales Director for the Northeast, hosted clients during the Northeast Roadshow. Matt was joined by 11 hotel partners for this three-day packed schedule from April 12-14 in New York City, Jersey City and Philadelphia. The Roadshow started in New York City with a VIP Luncheon with top-level decision makers followed by a dinner reception and presentation at Rue 57. The following day, Matt and the partners headed over to Jersey City to host customers at a third event for dinner and presentation at Liberty Prime. The roadshow finished strong in Philadelphia where partners and customers enjoyed watching the San Diego Padres at the Philadelphia Phillies for a day game and in the evening, the final event of the week was hosted at The Olde Bar for a dinner reception and presentation. This three-day, five-event tour attracted over 120 individual clients. Matt collected 26 leads totaling over 21,000 room nights, with more to come.

Gillian Ware, National Sales Director, partnered with four member partners to host Party with the Partners at CalSAE’s Elevate Conference held in San Diego at the Loews Coronado Resort. There were 177 clients who attended this meeting and Gillian received several leads. 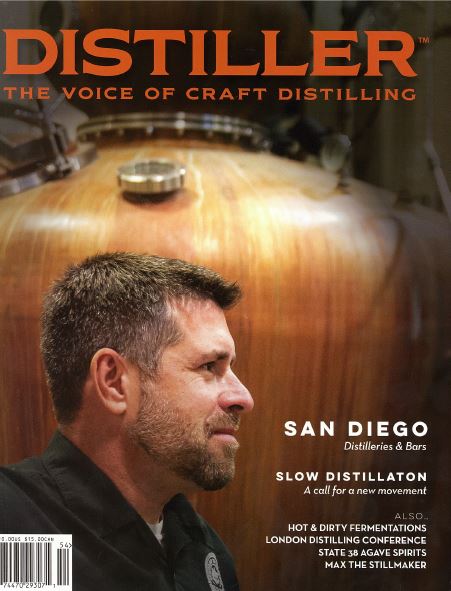 SDTA conducted a Sales Mission in Australia from April 4th to 8th. Riki Suzuki, Travel Trade Development Manager, and Penny Brand, Travel Trade Representative Australia, had 20 meetings and trainings with key accounts in Sydney and Brisbane to discuss new product development and to educate the front line agents about the destination.

Charles Sun and Jayce Guo, Travel Trade Representatives in Shanghai and Beijing, participated in Visit California China Sales mission in Shanghai and Beijing during April 11th to 15th. At the Shanghai session, Charles had opportunities to meet one-on-one with 44 representatives from key travel agencies, tour operators, wholesalers from Shanghai, Jiangsu, Zhejiang and other China provinces attended this event.

Travel Trade Director, Benjamin Eastman attended the TravelBrands Agent Appreciation Roadshow events in Calgary & Vancouver, Canada in early April.  At each event, he – along with 3 SDTA members – was able to educate and network with several hundred regional travel agents. The new seasonal non-stop Vancouver flights were of particular interest to the agents during these shows.