Below are some of the sales & marketing highlights from various departments during the month of January 2016.

Web traffic for January included 451,816 user sessions between the desktop and mobile websites and we posted a total of 133 Tweets, 75 Facebook posts, 21 Google+ Posts and 26 Instagram posts through our social channels, 5 blogs, and distributed 5 consumer emails. 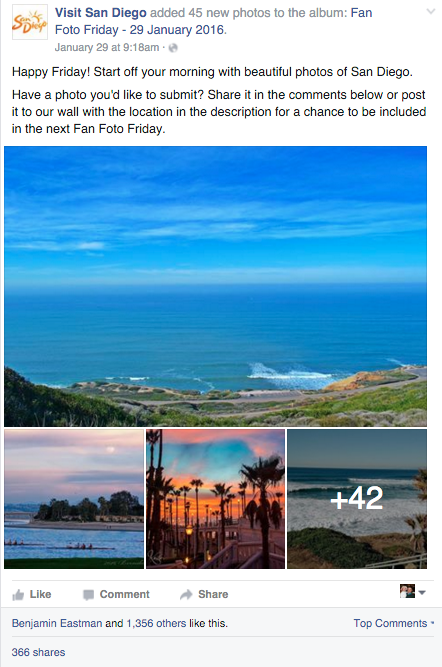 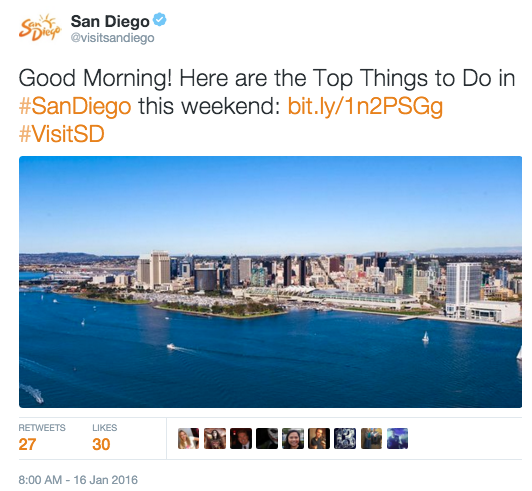 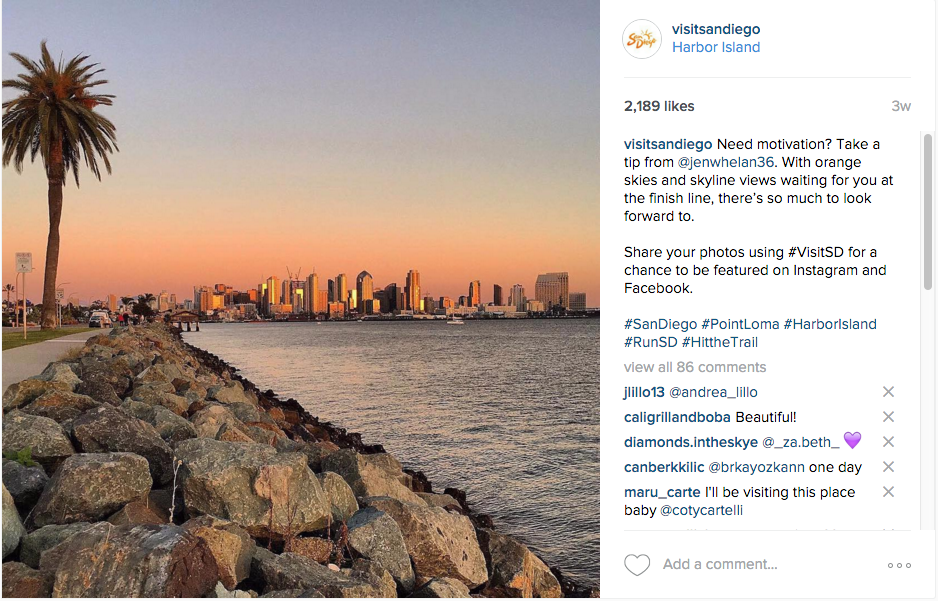 In December, we ran Luxury and Value pay-per-click on Google for the sub regions totaling $3,042.27 which generated 27,340 impressions and 880 clicks for a total click through rate of 3.21%.

Overall traffic to the Luxury and Value pages on sandiego.org was 1,525 visitors.  The social media team, in partnership with Casual Fridays, shared 35 pieces of content on Facebook & Instagram highlighting running trails for the New Year, and repurposed the Explore I15 content for an article on SanDiego.org. 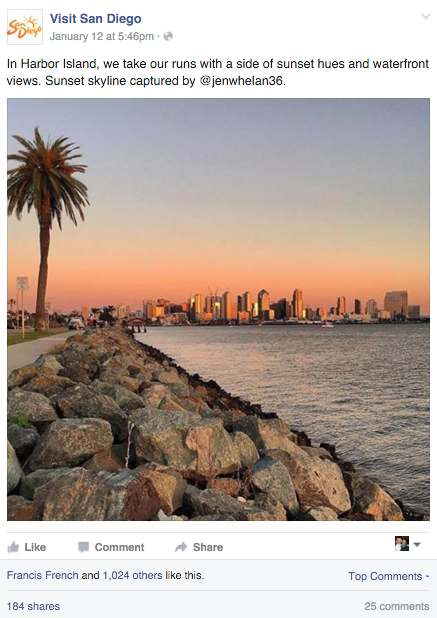 There were three B2B LinkedIn posts reaching our professional audience. Posts included articles about our featured episode of Top Chef California, the opening of San Diego International Airport’s Rental Car Center, and Fodor’s announcement of San Diego as a Top 10 Beach Getaway for 2016. LinkedIn grew by 1 % from last month to 4,582 followers. 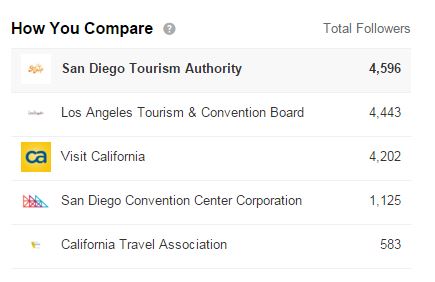 @SDTAConnect Twitter base grew by 3.2% from last month to 2,246 followers. There were 81 tweets during the month.

This month, the tweet with the most exposure (2,630 impressions) was panoramic photo of our social media workshop at the Horton Grand, with guest speaker Mike Stelzner.

The tweet with the most engagement was sharing a group of photos of our advertising campaign, on taxi cabs outside of famous London landmarks. 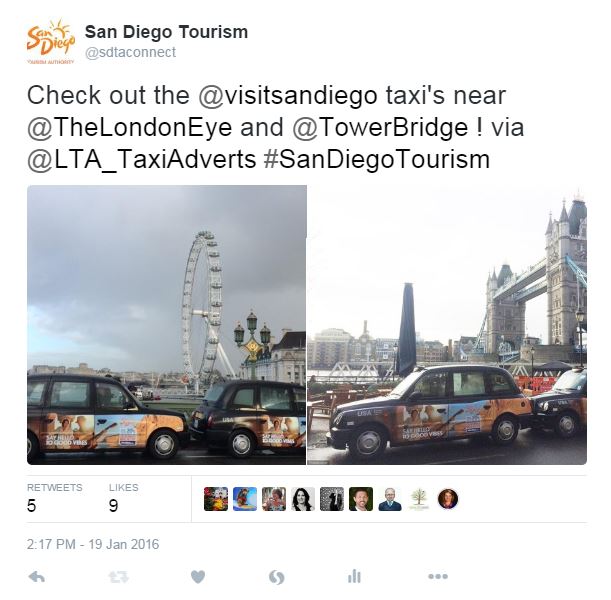 In January 2016, SDTA began its Spring Spot TV rotation with :30 and :15 spots in Seattle, Chicago and New York.  The Fall brand advertising campaign continued with brand print ads in Golf Digest, Outside magazine and Runners World. An advertorial ran in Golf Digest as well. The Spring Digital Campaign kicked off with a combination of digital video and display running on ABC.com, Hulu.com, Fox Digital Media, and YuMe. Paid social promotion of Mr. Positivity continued to run on Facebook and YouTube. Brand advertising spend for January totaled $1,077,948 and delivered 37,123,337 impressions.

In January, San Diego Tourism Authority rolled out its UK Digital Campaign. Digital video and display ran on Sojern, Yahoo, the Telegraph, TripAdvisor, Sky, YuMe and Facebook. SEM ran with Google. Total spend for the month of January was $184,615.50 including a BUSA net contribution of $30,769.26. Total impressions were 16,398,281.

The Ad Sales team added over $112,000 in new advertising commitments in January.

We’re happy to welcome these new members in the month of January.

The Hotel Meetings Sales Team converted 41 bookings, generating 26,335 Room Nights in the month of January, up 72% to January of last year. 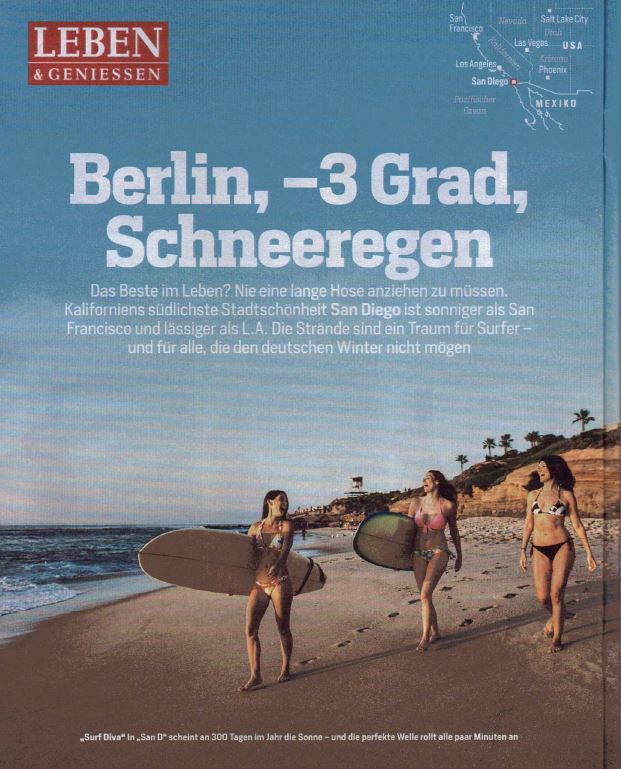 In partnership with PR and also with SeaWorld, the SDTA Travel Trade Team hosted a Mexico VIP FAM January 10-12.  Seven top media and tour operators from Mexico City, Guadalajara, Monterrey & Cancun experienced the latest in San Diego, including use of the Cross Border Xpress as a direct arrival into San Diego from Mexican flights.

Travel Trade Manager, Albert Navarro, attended the California Alliance Sales Mission along with 6 members for client presentations in Mexico City, Guadalajara and Leon, Mexico from January 25-29.  100 top tour operators and travel agents were on hand at each city to learn what is new in San Diego and southern California.  The delegation also hosted a media breakfast for 30 top Mexican media and held a San Diego specific agent training with over 50 agents in attendance.