Below are some of the sales & marketing highlights from various departments during the month of December 2015.

Web traffic for December included 481,670 user sessions between the desktop and mobile websites and we posted a total of 156 Tweets, 60 Facebook posts, 21 Google+ Posts and 18 Instagram posts through our social channels, 8 blogs, distributed 5 consumer emails. 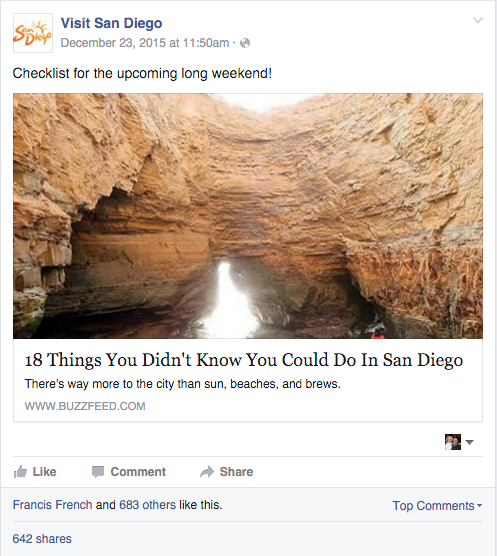 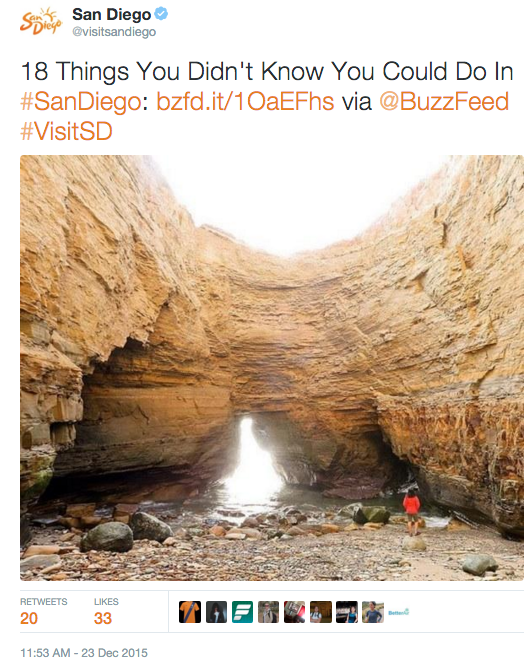 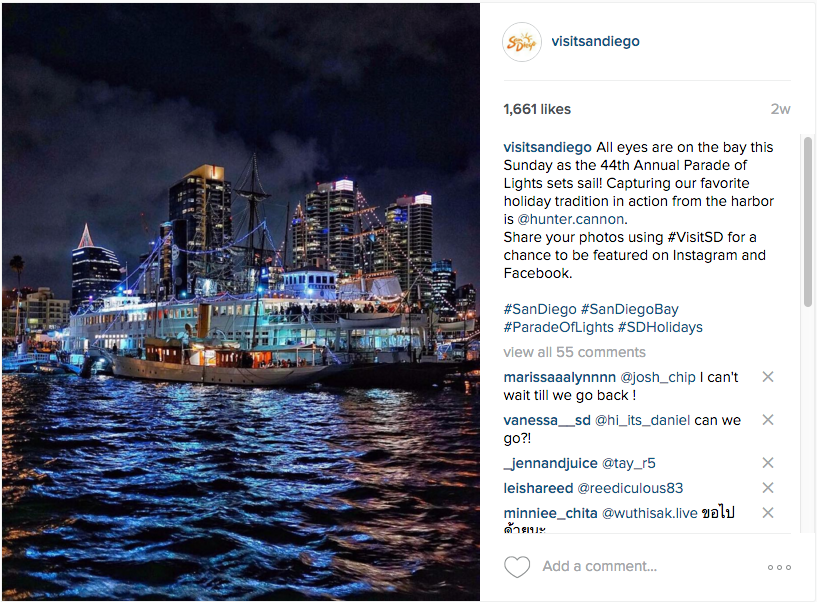 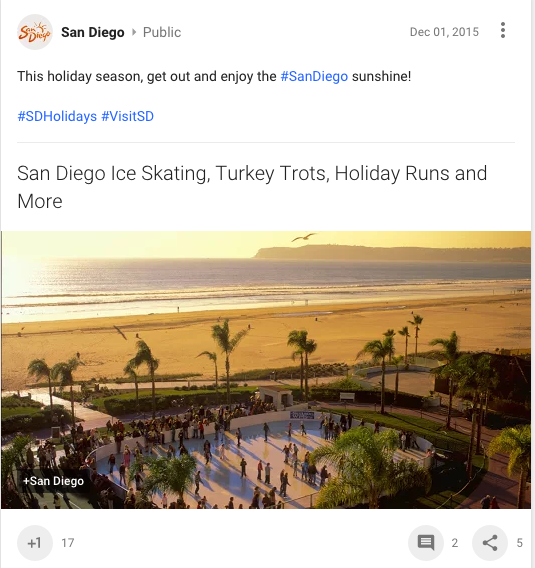 In December, we ran Luxury and Value pay-per-click on Google for the sub regions generating 233,406 Impressions and 2,630 clicks with a total spend of $3,513.57.  Overall traffic to the Luxury and Value pages on sandiego.org was 2,036 visitors.  The social media team, in partnership with Casual Fridays, shared 10 pieces of User Generated Content on Facebook & Instagram, and published a infographic highlighting the Mission Bay Parade of Lights through Facebook, Google+, Twitter and Blog. 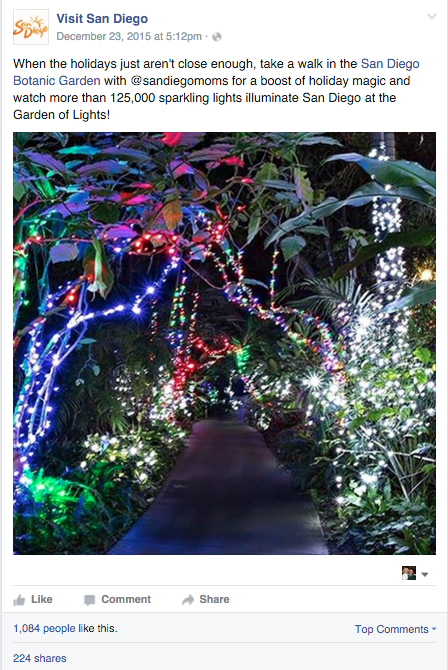 EMAIL: A holiday eCard was sent to our B2B meeting clients wishing them a ‘sunny’ holiday season. 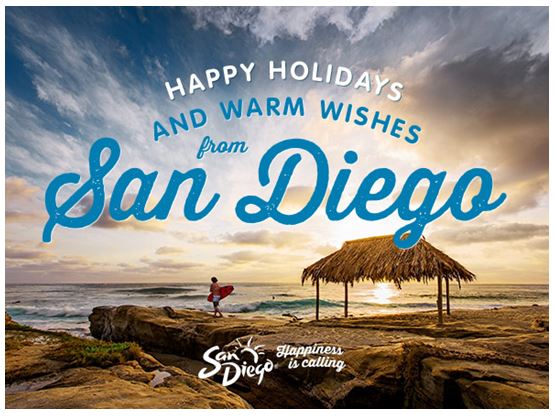 LINKEDIN: There were seven B2B LinkedIn posts reaching our professional audience. Posts included articles on our Times Square NYC advertising, a research report on the record year in our tourism economy, a recap of awards the destination earned, the opening of the Cross Border Xpress terminal, and more. LinkedIn grew by 1.05% from last month to 4,516 followers. 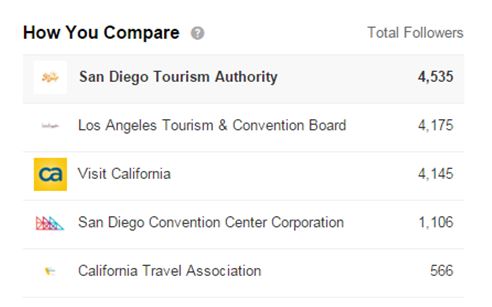 @SDTAConnect Twitter base grew by 2.2% from last month to 2,178 followers. There were 59 tweets during the month.

This month, the tweet with the most exposure (1,659 impressions) was a congratulatory post about Balboa Park on the 10Best Readers’ Choice Travel Awards.

The tweet with the most engagement was posted on the day before New Year’s eve.  SDTA President Joe Terzi and PR Manager Edna Gutierrez were interviewed in our offices for a Spanish language television program. 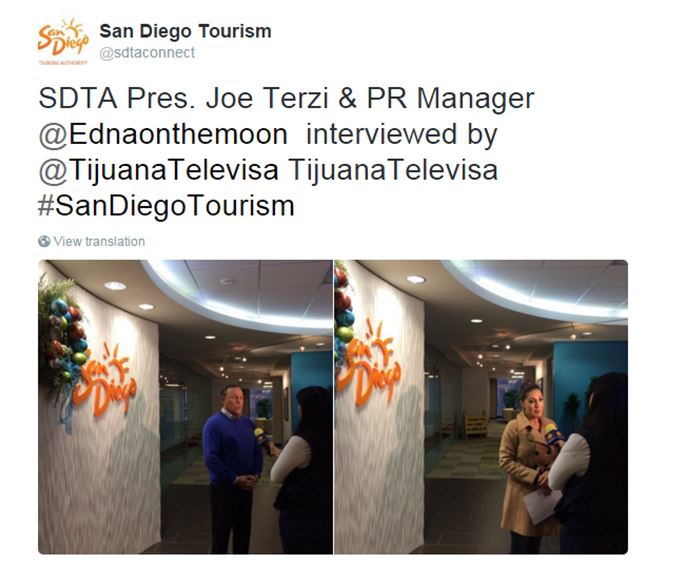 In December, San Diego Tourism Authority continued its international brand campaign in Canada. Digital video ran on CTV and BrightRoll; digital display units ran on Sojern, Yahoo, and TripAdvisor; and SEM ran with Google. Total spend for the month of December was $75,121.30 including a BUSA net contribution of $15,503.43. Total impressions were 12,724,576.

The Marketing Partnerships team finalized an agreement with TicketSauce, a premier provider of event ticketing software and service. The license with TicketSauce will enable the SDTA to build a partnership model with a suite of ticketing, hotel booking and marketing solutions for an event owner. The result will be a package of services available to event owners to help grow the destination’s event portfolio, and the SDTA will be able to capture commission-able revenue based on event ticket transactions.

The Ad Sales team added $82,000 in newly booked revenue in December, with the majority of the new revenue coming in Meeting Planner Guide contracts.

Advertising on sandiego.org continued to run at full advertising capacity.

The team also launched a new advertising opportunity around the SDTA’s Holiday in San Diego effort. Members also bought into packages for New Year’s Eve and Whale watching that included placement in an email and ad placement on the main landing pages for each topic.

Nearly 20 Members participated in the three programs, resulting in over $15,000 in newly created revenue.

We’re happy to welcome these new members in the month of December.

Citywide sales and single property sales joined partners for the annual Association Forum of Chicagoland’s Holiday Showcase. This year, 135 association CEOs attended along with nearly 250 meeting planners. Prior to the start of the Showcase, the team also hosted its Annual San Diego Holiday Breakfast where 115 customers attended. 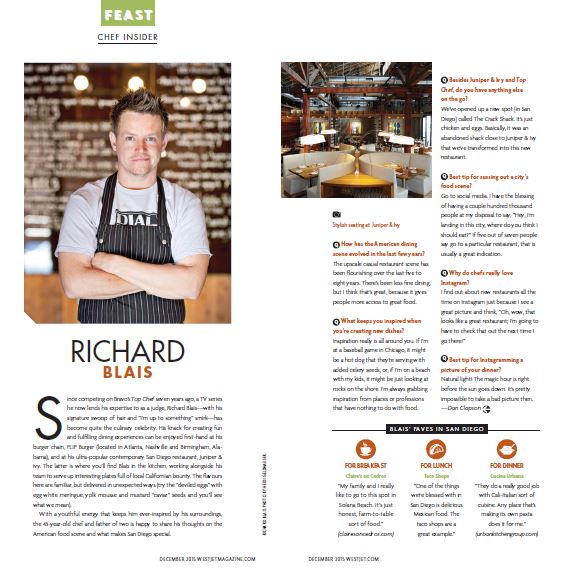 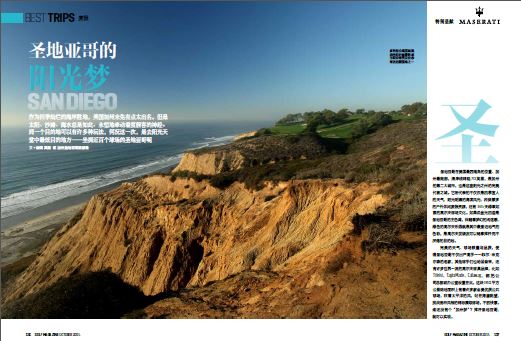 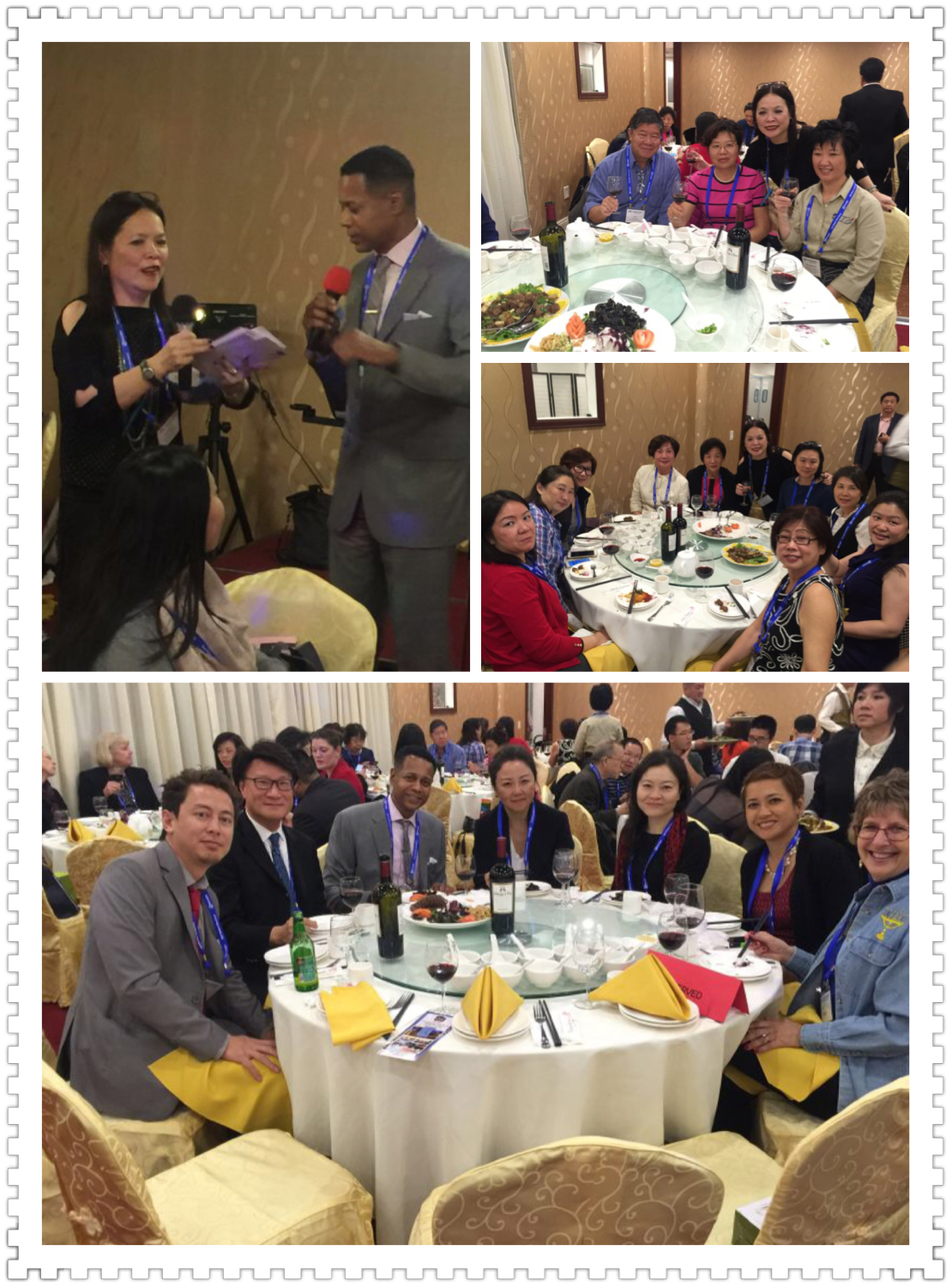 Albert Navarro, Travel Trade Manager, traveled to Monterrey, Mexico to promote San Diego to this top new market for the first time.  In partnership with tour operator Sierra Madre, he hosted a travel agent training attended by nearly 100 agents.  Following the breakfast, Albert also met with 3 other tour operators while in Monterrey to discuss product and promotional opportunities.  He also conducted travel agent training for 40 top agents in Guadalajara and met one-on-one with 6 tour operators in the market to discuss product development.