Below are some of the sales & marketing highlights from various departments during the month of November 2015.

Web traffic for November included 365,574 user sessions between the desktop and mobile websites. We posted a total of 100 Tweets, 75 Facebook posts, 24 Google+ Posts and 20 Instagram posts through our social channels; 8 blogs, and distributed 5 consumer emails. 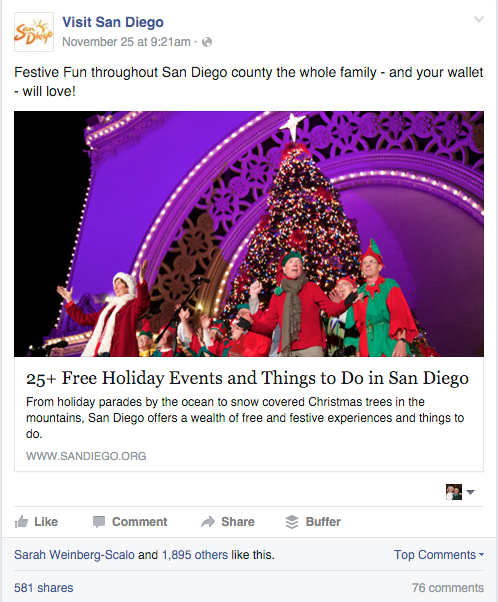 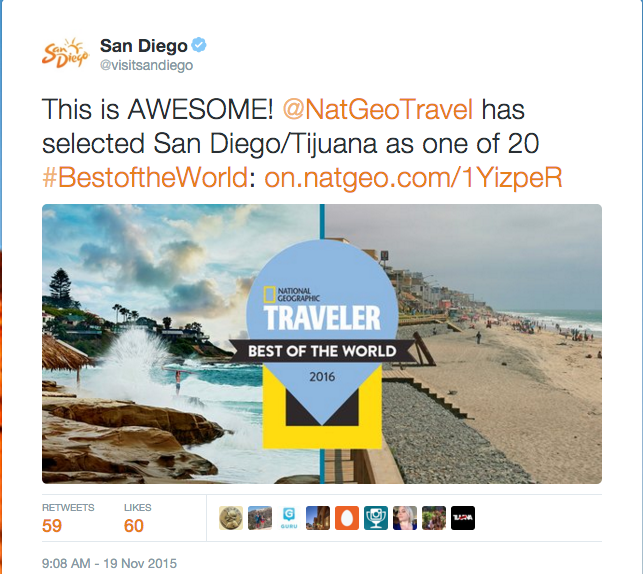 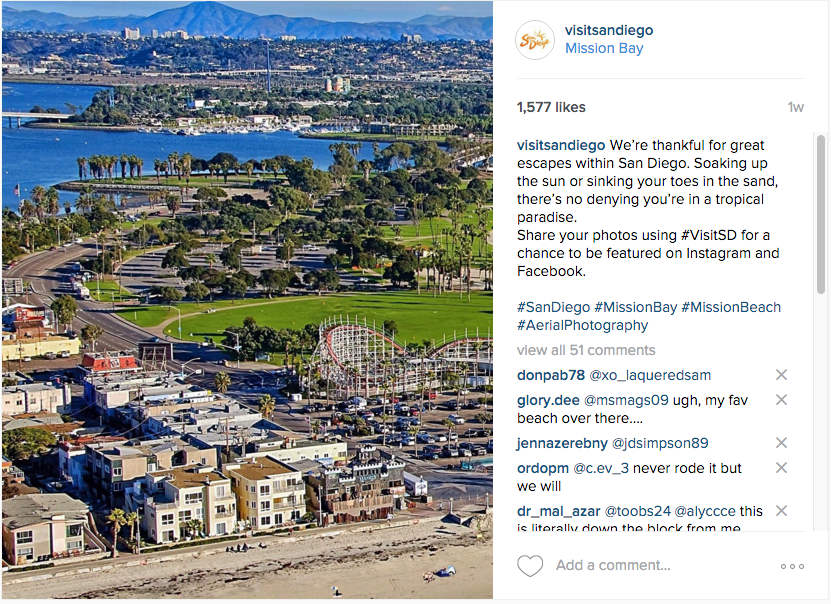 In November, we ran Luxury and Value pay-per-click on Google generating 23,005 impressions and 863 clicks for a total spend of $3,478.33. Overall traffic to the Luxury and Value pages on sandiego.org was 1,252 visitors. The social media team, in partnership with Casual Fridays, shared 14 pieces of User Generated Content on Facebook & Instagram, and published a series of posts in the La Jolla Playground series through Facebook, Google+, Twitter and Instagram.

In November, in coordination with our social media partner Casual Fridays, we ran the Fast Track to San Diego Sweepstakes promoting the North County Coastal Region. The sweepstakes garnered a total of 13,155 entries and 9,979 engagements for a total reach of 2,315,577. 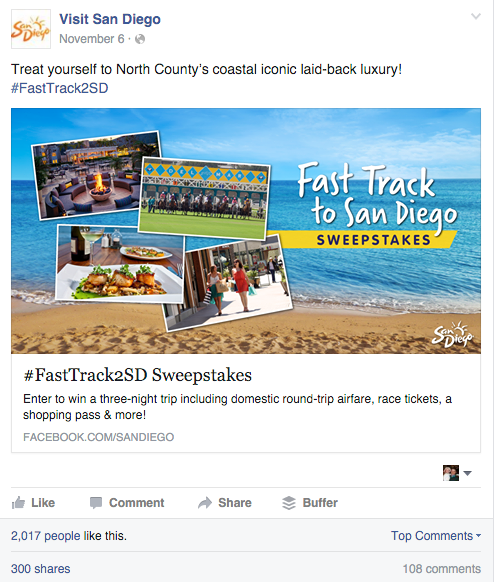 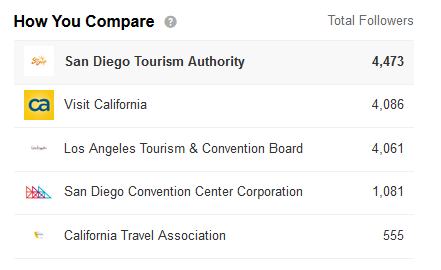 TWITTER: @SDTAConnect Twitter base grew by 3.9% from last month to 2,129 followers. There were 57 tweets during the month. 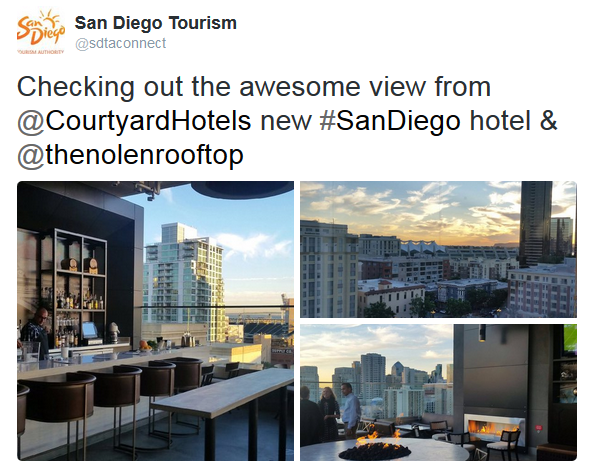 In November, San Diego Tourism Authority continued its international brand campaign in Canada with TV spots running on national cable with top networks for our target audience; digital video ran on CTV and BrightRoll; digital display units ran on Sojern, Yahoo, and TripAdvisor; a social media campaign with video ads on Facebook; and SEM through Google. Total spend for the month of November was $373,971.89 including a BUSA net contribution of $34,707.59. Total impressions were 52,558,476.

Brian Hilemon has been working with Market Staging Inc. (MSI) to explore a destination healthcare program to promote San Diego as a healthcare destination. A key element of a potential program is thorough collaboration with San Diego’s healthcare leaders.

Brian and MSI held initial meetings with Sharp, UC San Diego Health, and Children’s Hospital to introduce the concept and gauge interest from the healthcare community.

The Ad Sales team booked over $50,000 in new business, and sandiego.org continues to run at full capacity from an advertising perspective.

We’re happy to welcome these new members in the month of November. 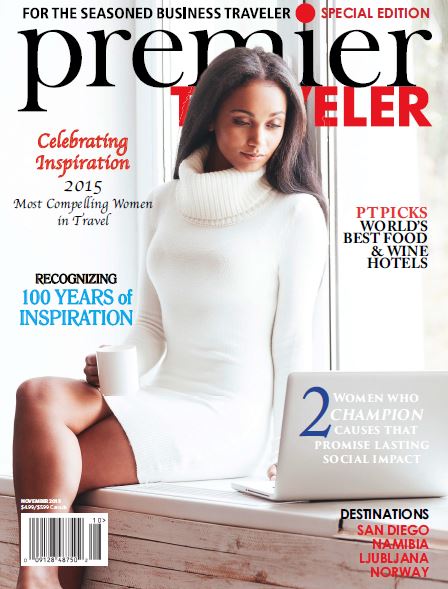 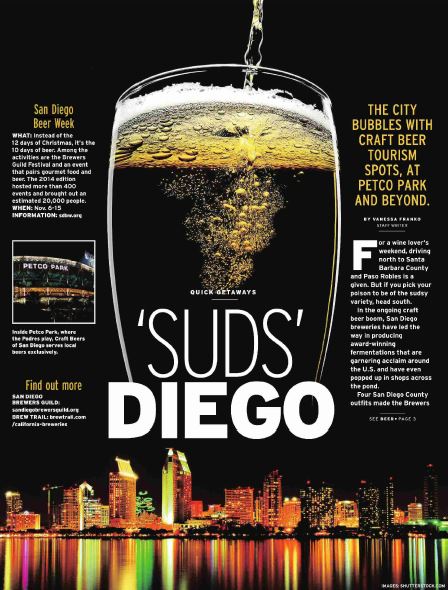 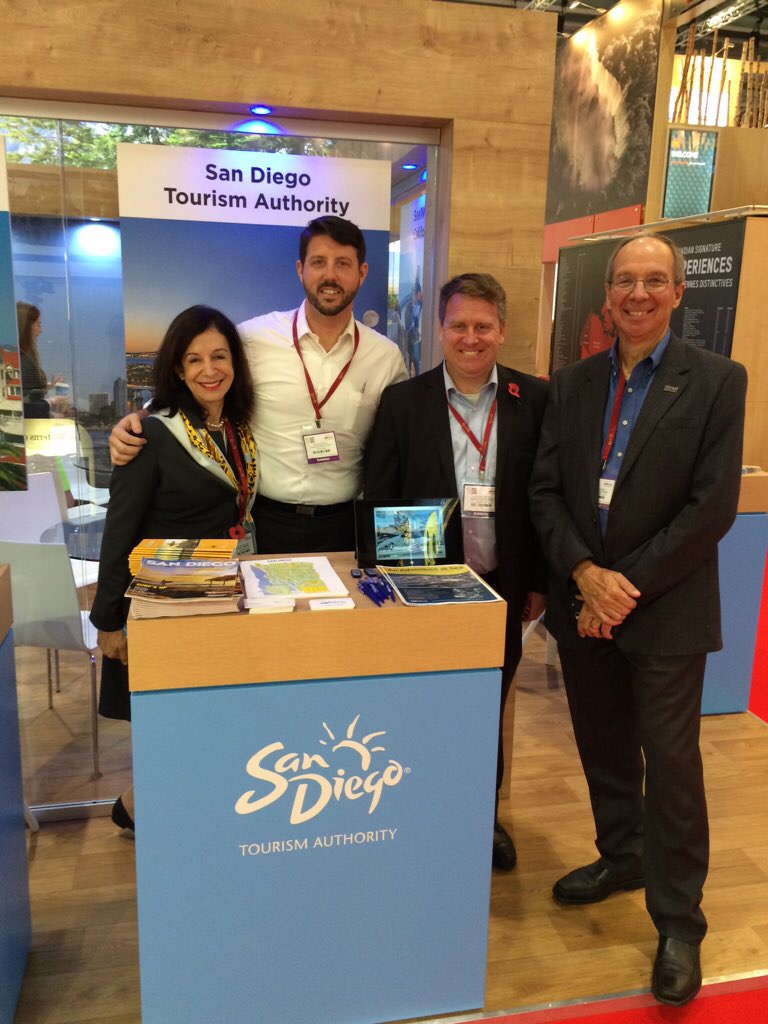 Benjamin Eastman, Director of Travel Trade, attended the World Travel Market (WTM) trade show in London in early November as part of the Visit California booth. Prior to the show the VCA delegates held a Client Event with nearly 100 top Travel Trade and Media members attending. During the trade show, Benjamin met one-on-one with over 25 different Trade and Media partners to develop and solidify relationships in this important international market.

After the WTM tradeshow, Benjamin Eastman traveled to Germany for additional trade activities. Benjamin joined several other California destinations to do trainings at the offices of CANUSA, America Unlimited and TUI Germany. In addition to these trainings Benjamin also participated in the CRD Consumer Show – where the VCA booth saw over 1,000 consumers stop off and San Diego hosted a San Diego craft beer tasting. Benjamin also joined the DER Tours Travel Agent trade show during that weekend where he joined the VCA booth and was able to interact with nearly 1,500 travel agents.

In November, Visit California held an inaugural Australia Mega Fam partnering with United Airlines. Travel agents within the Helloworld Consortium, one of Australia’s leading travel groups with brands like Harvey World Travel, Jetset Travel, Travelworld, Travelscene, and American Express, were recruited. Also San Diego was host to the grand finale, with all 37 agents gathering in San Diego for the final evening event, followed by breakfast and time in SeaWorld the next day.

Visit California held an event, Global Ready China, in San Diego on November 18th. SDTA assisted VCA to invite members to the seminar. Riki Suzuki, Travel Trade Development Manager open the event by welcoming the guests and discussed with attending members who are interested in the market how to promote their products in China before and after the seminar.

Travel Trade Development Manager, Albert Navarro, attended the AAA Arizona Travel Show in Phoenix in mid-November. He, along with nine San Diego hotel and attraction partners, promoted the destination to nearly 2,000 consumers at the 1-day show.