August was a busy month for the STDA sales and marketing teams. From sales missions to new digital campaigns, the team was preparing for a busy close to summer and the launch of October’s Kids Free Campaign. Below are some of the sales and marketing highlights from various departments during the month.

In August, we posted a total of 103 Tweets, 67 Facebook posts, 24 Google+ Posts and 9 Instagram posts through our social channels, 4 blogs, and distributed 6 consumer emails.

Web traffic for August included 472,662 user sessions between the desktop and mobile sites.

LINKEDIN: There were seven B2B LinkedIn posts reaching our professional audience. Posts included articles on our National Sales Director Ernie Rossow receiving an award at HPN, a promotion of a new Member business, a blog article on Islands of San Diego, a shared PCMA article, Cvent recognition of San Diego, and several invitations to our Annual Workshop. LinkedIn grew by 2% from last month to 4,159 followers. 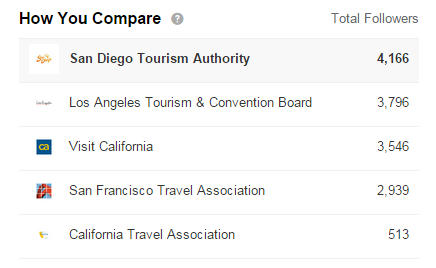 TWITTER: @SDTAConnect Twitter base grew by 3.4% from last month to 1,845 followers. There were 30 tweets during the month.

The tweet with the most engagement (24) was in support of a Revenue Management Seminar by Duetto and hosted by Joe Terzi and presented to hotel stakeholders. 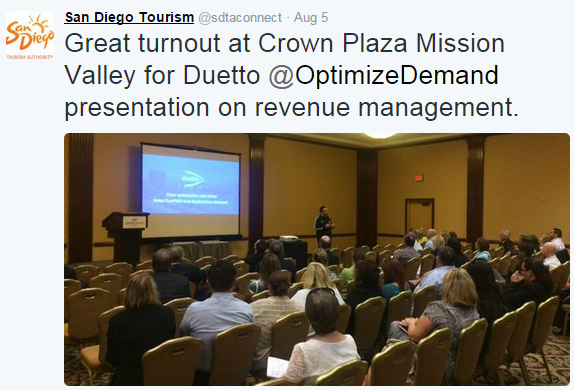 In addition to the domestic brand campaign, San Diego Tourism Authority is expanding efforts to international markets starting with Canada. Specifically, the Kids Free promotion was extended into Canada with digital display for Nickelodeon and Conversant and a newspaper section in the Vancouver Sun. Total spend for the month of August was $18k and total impressions was 1.08MM.

The Membership team hosted a newly revamped Member Inspiration training for 15 new SDTA Members. These sessions are valuable in empowering Members to take advantage of their new opportunities and represent our renewed efforts to better engage and retain Members in FY 16. Member Inspiration is a fresh direction for on-boarding, and aims to leave Members excited and eager to take advantage of their Member benefits. The Members also had an opportunity to give a brief presentation to the SDTA team. The Inspiration training also was webcast, allowing several new Members who could not physically attend to participate.

Advertising sales contracted $31,750 in new revenue, putting online ad sales 131% ahead of pace. Online sales have been so strong that sandiego.org is nearing a sellout for the first time ever.

Brian Hilemon also attended the LA Tourism & Convention Board’s Annual Meeting to audit how they produce their major events for Members and stakeholders.

Joe Terzi, Brian and SDTA Board Chairman Scott Hermes have been working to identify and develop new sources of Private Source Revenue for the organization. In August, they narrowed their focus to three new initiatives, and held several meetings with potential consultants to review proposals.

We’re happy to welcome the following new members in August.

A few highlights of events that our Sales team attended during the month:

National Sales Directors, Andrea Cowsar (Hotel Sales) and Maria Andriola (Citywide Sales) attended the ASAE Annual Meeting and Expo in Detroit from August 8-11. They were joined by five hotel and venue members in the SDTA tradeshow booth. Onsite they received three RFPs, 10 for the near future, four to be emailed, 17 future definites and 12 strong prospects.

The Citywide Sales team is off to a strong start to FY16. The 78,108 room nights booked so far have included bookings placed over key need dates including Labor Day, President’s Weekend, December, and the week leading into Memorial Day Weekend