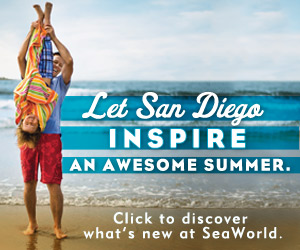 Just in time to promote San Diego ahead of the peak summer travel season, the San Diego Tourism Authority (SDTA) and SeaWorld San Diego launched a vital $3.2 million co-op advertising campaign on May 6.

The campaign puts San Diego back in the marketplace advertising our destination in Los Angeles, San Francisco and Phoenix, and consists of television commercials running May 6 through June 9, 2013, on major network and cable TV stations. A digital ad campaign will also run concurrently on Hulu, Fox, ABC and other online channels throughout May and June.

We are fortunate and grateful to SeaWorld who have been steadfast partners of the SDTA for the last 25 years. Working together, we have been able to stretch the reach and frequency of San Diego’s advertising efforts imperative to driving visitor demand.