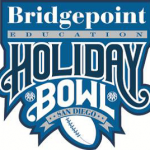 The UCLA Bruins and Baylor Bears have accepted invitations to play in the 35th annual Bridgepoint Education Holiday Bowl, 2012. It marks the first appearance for both teams in the San Diego bowl game and it will also be the first meeting between the teams. The game kicks off at 6:45 p.m. on Thursday, Dec. 27th at Qualcomm Stadium.