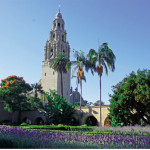 Celebrating its centennial anniversary in 2015, Balboa Park is an expansive 1,200-acre urban cultural park in the heart of San Diego. After hosting the 1915-16 Panama-California Exposition, the park became a national historic landmark with a dozen museums, restaurants, theaters and the world-famous San Diego Zoo. Often referred to as the Smithsonian of the West, Balboa Park has … END_OF_DOCUMENT_TOKEN_TO_BE_REPLACED